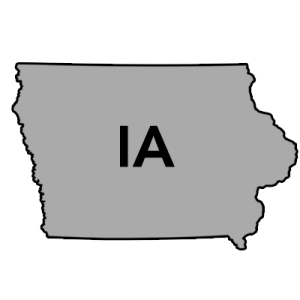 Iowa has only a single insurance carrier offering ACA-compliant individual market policies this year. Next year they'll have two, as Wellmark has decided to Hokey Pokey their way back onto the exchange again in 2019...but since they weren't around this year, there's no current policy premiums to measure any increase (or decrease) against.

That leaves Medica. Here's what they had to say about their 2019 rates back in June:

Medica, the sole carrier now selling individual health insurance policies in Iowa, plans to raise its 2019 premiums by less than a tenth as much as it did for 2018.

Medica raised its Iowa health insurance premiums by a staggering average of 57 percent for 2018. It was the steepest such health insurance increase in Iowa history. Company leaders said last summer they needed the higher premiums to stay in the market. But this time around, the Minnesota-based carrier is planning to raise Iowa premiums by an average of less than 5.6 percent, state regulators disclosed Wednesday.

The actual filing and average rate increase hasn't gone public yet, but the Iowa Insurance Dept. did say that Medica is below the 5.6% threshold which would trigger a public hearing. Based on that, it's conceivable that there could even be a price drop for Medica, but the article goes on to note that...

..."As a result we'll need a smaller increase to account for these challenges heading into 2019," [Medica VP] Bartsh wrote in an email to the Register Wednesday.

But what about the ACASabotage factor? How much of Medica's increase request is due to either the ACA's individual mandate being repealed or the expansion of #ShortAssPlans?

Well, the Urban Institute estimates around a 15.8 percentage point hit. I've been erring on the side of caution and going with 2/3 of that. However, I have to figure Iowa's new Farm Bureau plans will likely have pretty much the same effect as #ShortAssPlans by stealing away unsubsidized, healthy enrollees from the ACA risk pool, so I'm going to go with 1/2 of the Urban Institute estimate instead. That suggests roughly an 8% impact, which means that if the individual mandate hadn't been repealed, Medica would likely be lowering 2019 premiums by somewhere between 2-8%. I'm gonna call it -5% for the moment.

If and when Medica's actual rate filing becomes available, I'll be sure to revise/update this entry; I could be way off on this one.

All I knew was that Medica's 2019 premiums would be "below the 5.6% increase threshold", but I didn't know what it would actually be. At the time, I assumed it'd be perhaps 3.0%, and that's where I left it until today.

Earlier today, I noted that Avalere Health had published their own state-by-state estimates of 2019 average ACA premium changes, and while both of our estimates matched almost exactly in 38 states (and varied by less than 2% in another 7), there was one state which stood out: Iowa.

I estimated Iowa at around a 3.0% average requested increase, but Avalere Health had them down as asking for a 4.1% decrease. What was that based on? I didn't know. The only clue I had besides the article above was the rate listings at RateReview.HealthCare.Gov, but even that wasn't very helpful since Medica broke their filing out into three separate lisings ranging from a 16.5% drop to a 4.7% increase. Without knowing the relative market share of their enrollees, I had no way of knowing where the weighted average was:

Even looking at the filing form itself seemed fruitless since it's been redacted:

HOWEVER, thanks to a simple (and obvious in retrospect) tip from commenter "Bennet", I've uncovered the mystery:

BOOM, there it is: Medica actually requested a 7.9% average rate reduction for 2019!

OK, so now my Iowa number has gone from being 7 points higher than Avalere to nearly 4 points lower. What gives?

The only thing I can think is that either Medica revised their filing between June 15th and now (note the date in the first screen shot above) or the Iowa insurance dept. has already reviewed the filing and forced them to nudge their rate up a few points (believe it or not, not every regulator decision results in a premium reduction).

In any event, until I hear otherwise, I'm revising my Iowa number from a 3% increase to a 7.9% decrease...but that doesn't really change the estimated 8% impact due to the individual mandate being repealed and the expansion of short-term and association plans by the Trump Administration.

This means unsubsidized Iowa enrollees are looking at a 7.9% average premium drop next year...but would be paying 16% less if not for the sabotage factors. This amounts to around $79 per enrollee per month, or a whopping $948/year for every unsubsidized enrollee.