As for the sabotage factor, the Urban Institute only projected an 8.5% increase due specifically to the individual mandate being repealed and short-term plans being expanded. As usual, I'm knocking 1/3 off of their estimate to play it safe and assuming that rates would drop by an additional 5.7 percentage points for 2019 if not for #ACASabotage.

Unsubsidized Alaska enrollees are paying an average of $795/month this year, so that means instead of paying $686/month next year, they'll likely have to pay around $731/month. That's $45/month more, or $540 more for the year than they would otherwise have to.

UPDATE: Huh. This is kind of odd...read this press release from Alaska Governor Bill Walker's website:

ANCHORAGE – Premera Blue Cross Blue Shield on Wednesday announced submission of a 2019 individual market filing to the Alaska Division of Insurance which, if approved, would decrease rates by an average of 3.9 percent.

With the latest filing, rates have decreased more than 25 percent since Governor Bill Walker’s Alaska Reinsurance Program was implemented last year. That means average monthly premiums are set to decrease from $1,043 in 2017 to $770 in 2019. Reinsurance creates an insurance pool for insurers to provide reimbursement for the highest-cost patients to stabilize the market and prevent premiums from escalating.

“Reining in the high cost of healthcare in Alaska is a key priority of my administration, and this filing from Premera is yet another sign that we are making progress,” Governor Walker said. “Tens of thousands of Alaskans will save money because of this innovative policy. This is especially remarkable because, at the same time our costs were dropping dramatically, other states have endured double-digit increases.”

Premera’s rate filing will not be finalized by the Division of Insurance until August 22.

The main point of the release is to tout the success of Alaska's reinsurance program, and that checks out (rates in Alaska did indeed drop around 22% this year). What's strange about it is that Walker himself understates the positive impact of his own reinsurance program--he claims rates will fall 3.9% more next year instead of the 7-10% noted by Premera itself. Not sure what to make of that.

“Among the factors contributing to lower rates are decreases in the use of medical services, the continued stability of the state’s individual insurance market and the state’s reinsurance program,” said Jim Grazko, President and General Manager of Premera’s Alaska office.

Unsubsidized Alaska enrollees are paying an average of $795/month this year, so that means instead of paying $719/month next year, they'll likely have to pay around $770/month. That's $51/month more, or $612 more for the year than they would otherwise have to. 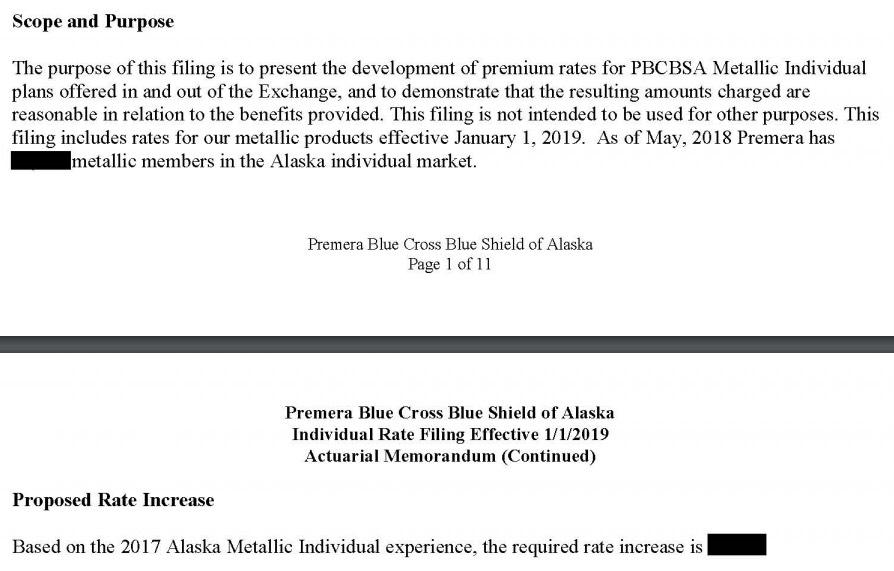