Breaking out of Nevada...

The cost of plans through Nevada’s health insurance exchange are anticipated to only increase by an average of 1.9 percent next year in what the state’s insurance commissioner said is the lowest proposed rate increase from insurance companies since the Affordable Care Act went into effect in 2014.

The announcement, made by the Division of Insurance late Tuesday morning, comes amid ongoing uncertainty about the impact that Congress’s repeal of the Affordable Care Act’s individual mandate and federal rule changes for two types of non-ACA-compliant health plans will have on the individual market as a whole. Insurance Commissioner Barbara Richardson cautioned that the proposed rates are subject to change based on any action by the federal government and said the division is working “diligently” to review the proposed rates from insurance companies.

That 1.9% figure is slightly misleading, though, because...

...Off-exchange plans, which are still ACA-compliant but sold outside of the official health insurance exchange, proposed an average rate increase of 3.1 percent.

I can't remember a time when any state insurance department has broken out the on & off-exchange individual markets into separate average rate filings. It's interesting, but kind of an odd thing to do since both the on & off exchange enrollees are part of the exact same risk pool.

According to CMS, as of 2017, Nevada's ACA-compliant indy market was roughly 61% on exchange vs. 39% off-exchange. I'm assuming that trend has continued this year and is likely more like 65/35, which would mean a weighted overall average of roughly 2.3%.

A 2.3% increase is still pretty mild...but there's a pretty obvious reason for this:

This year, Health Plan of Nevada proposed no rate increase and plans to offer nine plans for purchase on the exchange in 2019 in Clark, Nye and Washoe counties. SilverSummit, the insurer that stepped in last year to cover the 14 bare counties, plans to increase on-exchange rates by about 5.2 percent but will increase the number of plans it offers in all of the state’s 17 counties from four to six.

Sierra Health and Life, which will continue to only offer plans off-exchange in Clark County, proposed no rate increase in 2019 but will reduce the number of plans it offers from 12 to seven. The three other off-exchange insurance carriers all proposed rate increases: 0.8 percent for Health Plan of Nevada; 6.4 for Hometown Health Plan; and 14.3 percent for Hometown Health Providers.

Yup, as I've been noting for awhile now, the insurance carriers overshot quite a bit this year, which means that many of them are either reducing premiums or, at worst, only raising them nominally for 2019. That sounds like good news, but again, that still includes a ~10% or so sabotage factor from the GOP repealing the ACA's individual mandate and the Trump Administration expanding non-compliant #ShortAssPlans.

Unfortunately, most of the critical data points are redacted in the filing screen shots below, but at least one carrier (Sierra Health) comes right out and states that they're using the CBO's 10% hike estimate as guidance for the individual mandate repeal impact, while another carrier (Hometown Health) blots out their numbers but makes it very clear that they're assuming a higher impact from mandate repeal and #ShortAssPlan expansion than the CBO or other estimates suggest.

Combine this with my standard model of taking 2/3 of the Urban Institute's estimate (15.1 percentage points for Nevada) and it seems pretty safe to place roughly a 10-point sabotage hit on 2019 premiums.

If so, that means that Nevada carriers are asking for an average increase of 2.3%...but would be requesting roughly a 7.7% rate drop in the absence of the mandate being repealed and association plans being expanded. 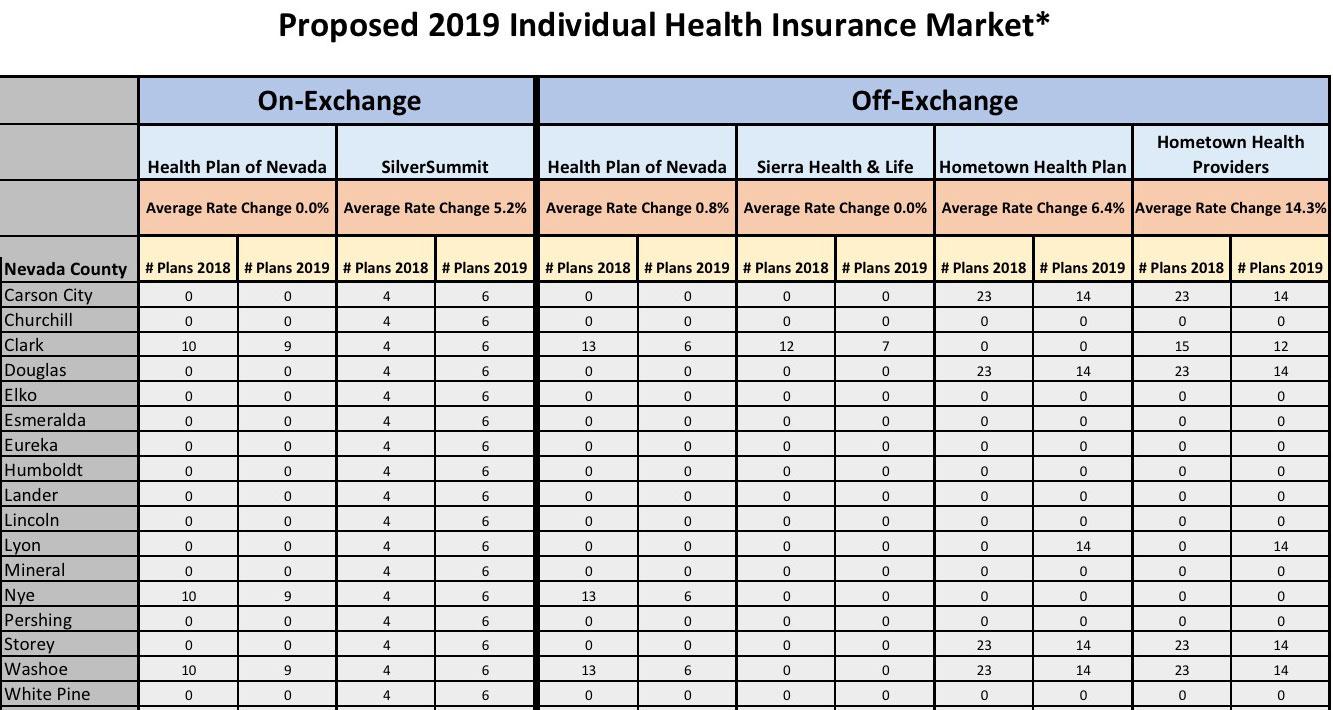 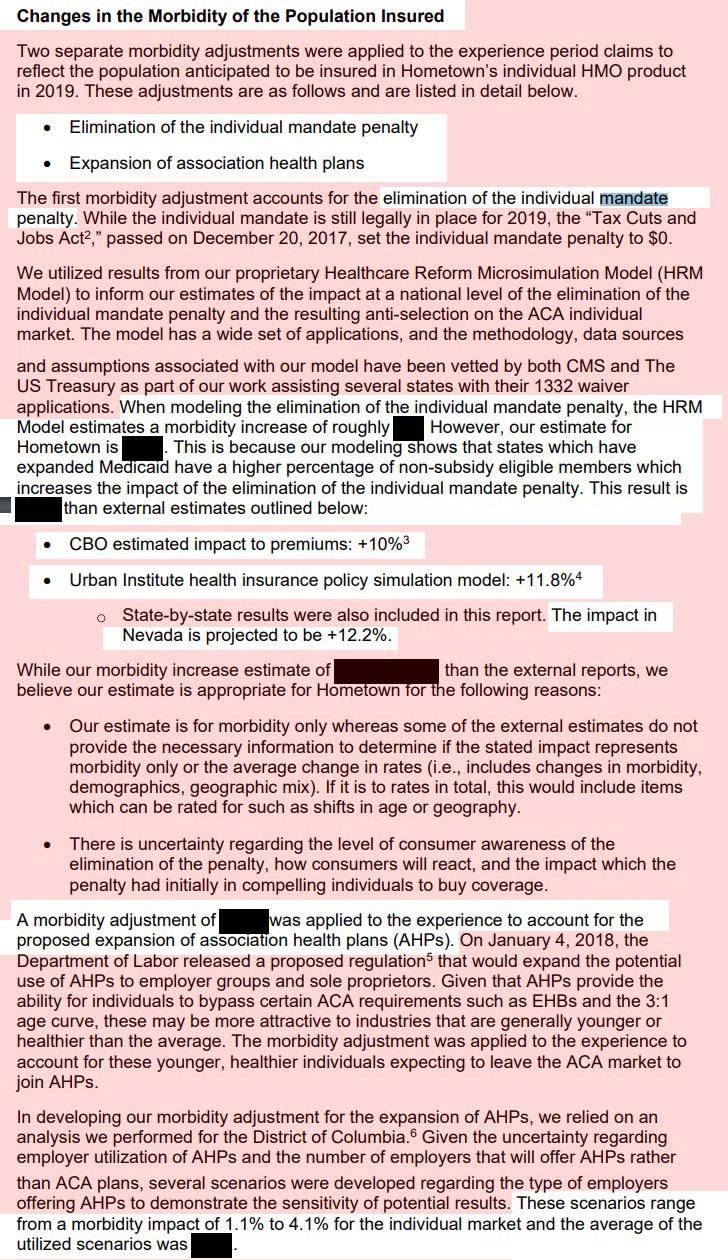 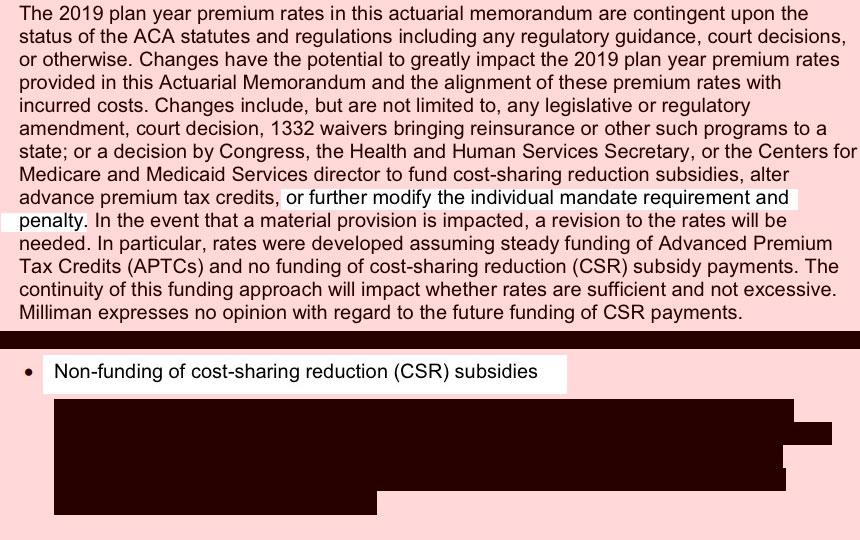