WARNING: As far as I can figure, Texas's ACA-compliant individual market totals somewhere around 1.4 million people (Mark Farrah Associates estimated the entire individual market at 1.6 million a little over a year ago; of that I estimate roughly 180,000 were enrolled in grandfathered or transitional plans). The breakout as of today should be roughly 1.1 million on-exchange enrollees and perhaps 300,000 off-exchange.

Unfortunately, while the SERFF database shows 2019 listings for most of the 11 carriers which offer ACA policies in Texas this year, it only actually has the filings posted for 3 of them so far: CHRISTUS, Sendero and FirstCare Health Plans (aka SHA, LLC). Even then, those three carriers hold a pretty small share of the market, totalling just 65,000 enrollees. That means I only have actual 2019 rate data for about 5% of the ACA market available so far.

With this in mind, I need to strongly caution people about reading too much into the 21.6% average rate hike being requested by these three carriers, or even the 13.5% average increase they'd be asking for without the ACA's individual mandate being repealed or Trump's expansion of #ShortAssPlans. These averages could easily be swamped and skewed significantly (higher or lower) when one or more of the Big Kahunas in Texas is plugged in. For instance, last year BCBSTX had around 390,000 enrollees...that's 6 times as many as CHRISTUS, Sendero and FirstCare combined. If BCBS comes in at, say, a 10% rate hike, that would single-handedly lower the weighted average from 21.6% to around 11.7%, and so on.

HAVING SAID ALL OF THAT, here's a partial look at the Texas landscape. Note that Christus is only pinning 2 points of their 9.6% increase on mandate repeal and Trump's marketing cuts, while Sendero is going with the CBO's full 10 percentage points. FirstCare specifically calls out mandate repeal and #ShortAssPlans as part of their 19.9% increase, but doesn't break it out specifically, so I'm assuming 2/3 of the Urban Institute's 20% estimate.

UPDATE: Sure enough, I've dug up a fourth filing for a larger carrier (Celtic/Ambetter), which is only asking for an average 4.7% rate increase next year. Unfortunately, they don't provide any enrollment information, so I had to base that on their 2017 number (187,000 enrollees), nor do they provide any insight into the mandate/shortassplan impact, so I'm using 2/3 of the Urban Institute's estimate here as well. Assuming these are both reasonably close, this brings the statewide average rate increase request down to 9.1%, with rates dropping by around 3.0% if not for the sabotage factors.

Again, this still only represents about 18% of Texas's total ACA individual market.

Also note the last screenshot below which shows a partial filing from Blue Cross Blue Shield of TX which claims that they're dropping premiums by 10.5%...but the filing contradicts itself, with an included response letter asking why they're showing a 10.5% drop but also stating that their average expected premium will be increasing by 0.1%. Until this discrepancy is cleared up, I can't plug BCBSTX into the spreadsheet.

I'd also need to see the additional documentation to understand how on earth BCBSTX could have overestimated their 2018 rate increases by so much--they requested nearly a 24% increase this year, but were only approved for 20.4%.

Assuming -10.5% is accurate and assuming BCBSTX still has roughly 390K enrollees in ACA plans, that would drop the statewide average down to -2.8% overall, or -15.8% without sabotage factors.

And yet...this would still only represent about 46% of the entire Texas individual market.

UPDATE: Thanks to Louise Norris for the heads up: Molina's Texas filing has been uploaded as well (see below), and is very specific: 236,000 current enrollees, a 13.3% average rate increase requested, and 9.9% of it is due specifically to the individual mandate being repealed. With Molina added to the mix, about 35% of Texas's total individual market is accounted for, with an 11.1% average increase with sabotage factors and a virtually FLAT average without it.

Again, I won't feel comfortable coming to any conclusions about Texas until I clear up the BCBSTX average and enrollee numbers since it represents around 28% of the Texas market all by itself.

UPDATE x2 7/13/18: OK, this is interesting...I double-checked the BCBSTX filing to see if there've been any updates, and while the full filings are still not available, they did update their limited filing, and there's one very interesting change: The response letter I referred to (in the screenshot below) has been removed from the filing. There's no longer any letter asking about the 10.5% drop (oddly, it's been replaced with a different letter which addresses Electronic Filing, which has nothing to do with the actual premium changes).

In other words, as far as I can tell, it sounds like Blue Cross Blue Shield of Texas is indeed dropping their 2019 average premiums by 10.5%.

Voila: While there's still a bunch of carriers missing, plugging in BCBSTX changes the averages dramatically. Again, assuming BCBSTX still has roughly 390,000 enrollees, the statewide average increase appears to have plummeted to just 1.5% for 2019...but without mandate repeal and/or #ShortAssPlans, I estimate they'd be dropping by around 10.6%. 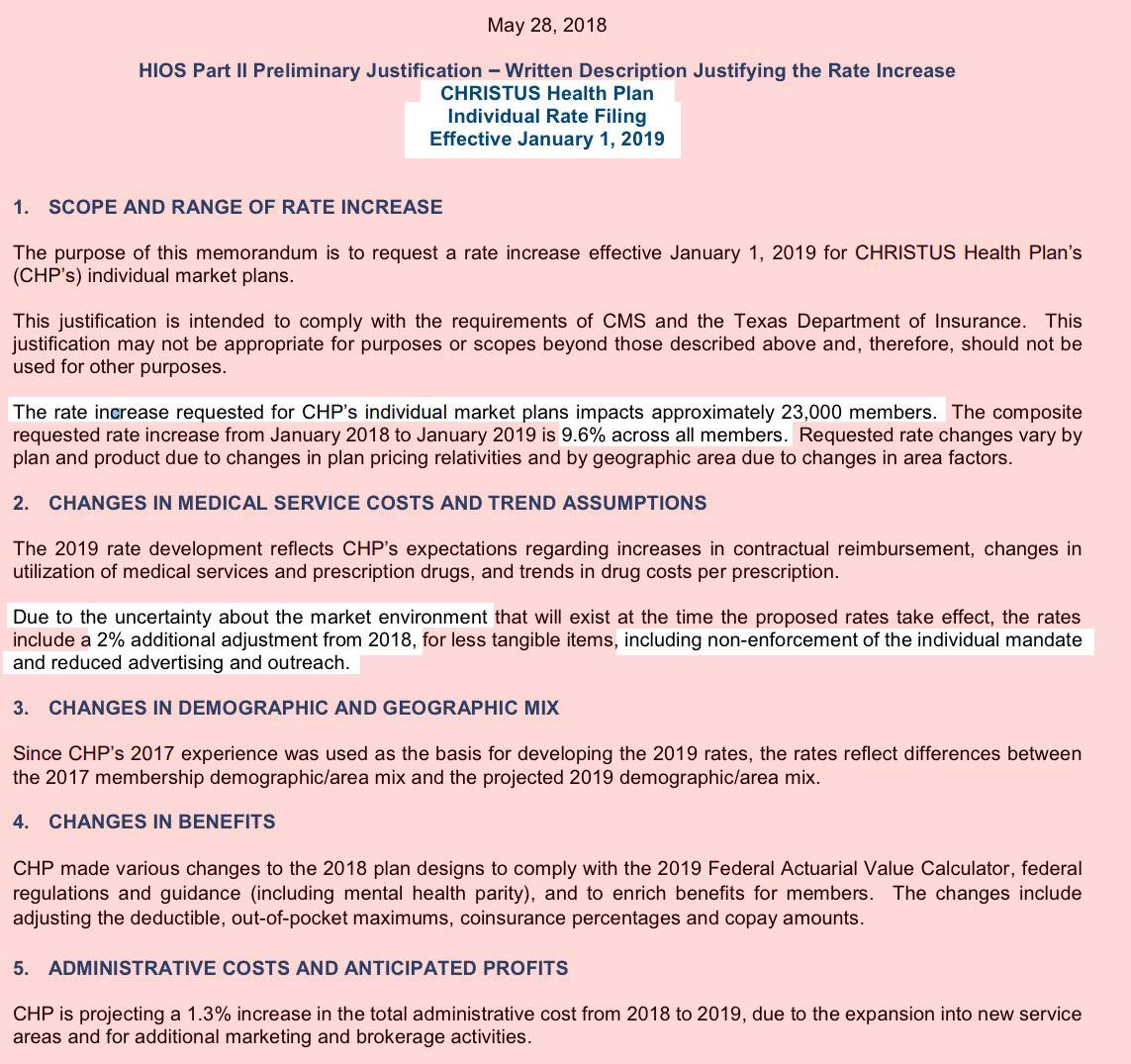 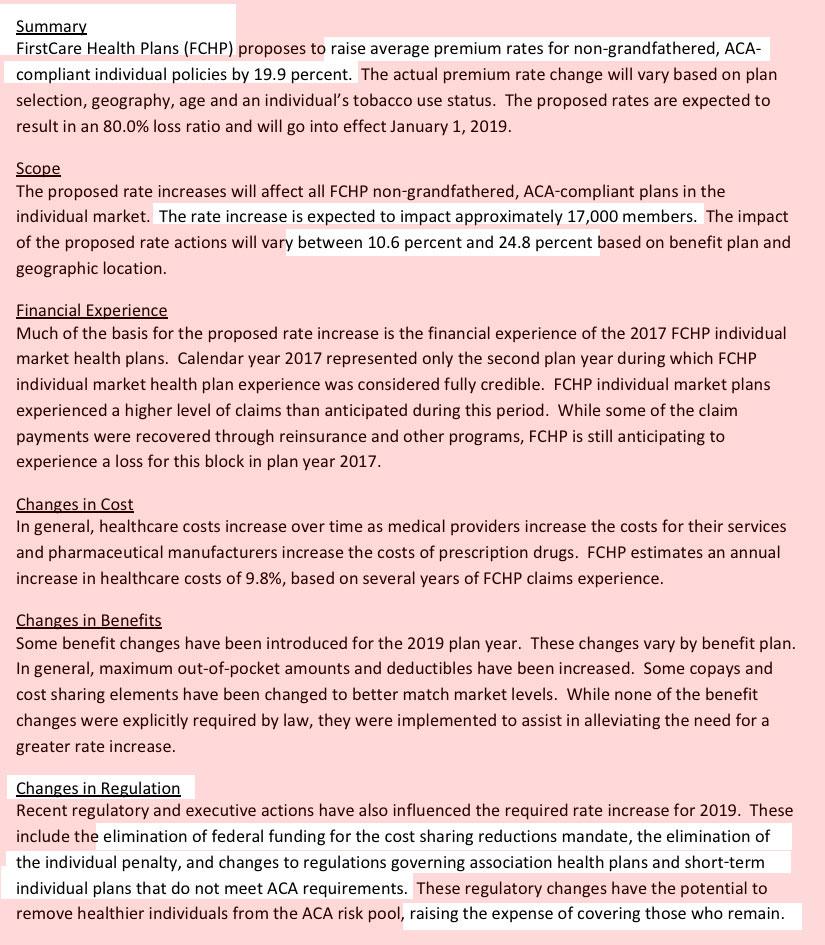 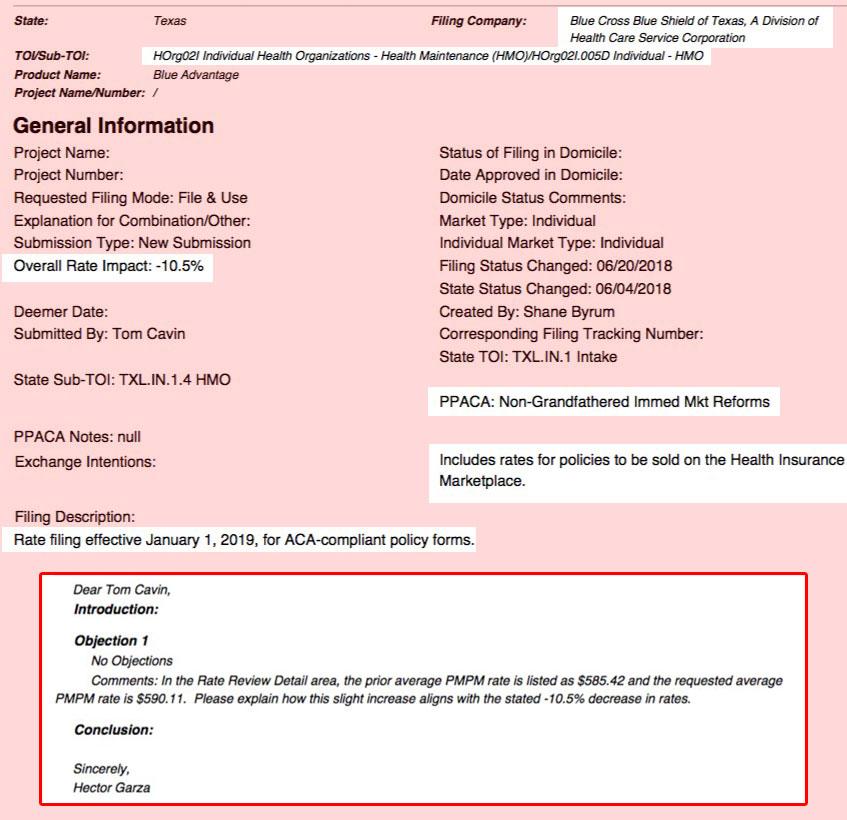 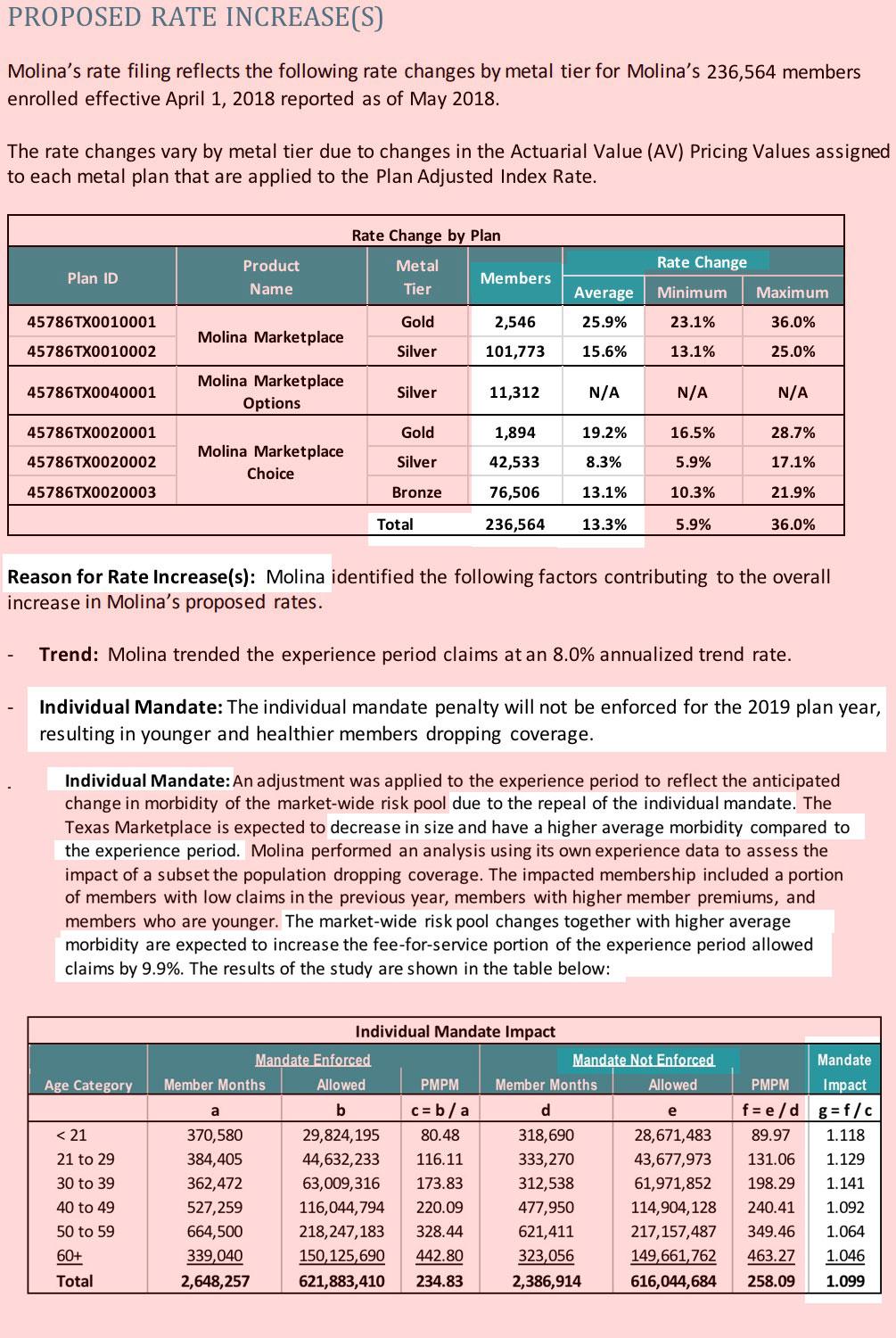