As it happens, that ~$960/person Trump Tax was exactly the same as one of the most likely scenarios projected by the Center for American Progress a year earlier:

But even the mere possibility that the Administration fails to implement these ACA provisions could spur a rate hike. Assuming a 25 percent chance that both these changes occur would suggest an 8.5 percent rate hike, or $480 annually on top of normal premium growth, as shown in Table 1. If insurers priced in a 50 percent likelihood of both these changes, that would lead to a 17 percent increase or $960.

Early data show that 2018 rates may be coming in higher than expected in many places. In a recent survey of insurers, the consulting firm Oliver Wyman found that the median rate increase for 2018 will be somewhere between 10 and 20 percent, an increase above what medical trend alone would justify.

The ~$1,000 figure is also very close to similar projections by both myself and the Urban Institute:

As it happens, this is also almost exactly the same amount that the Urban Institute projected would be the case nearly a year and a half ago:

We find that premiums for silver Marketplace plans would increase $1,040 per person on average. This premium increase would, on average, make silver plan premiums higher than those of gold plans(plans with 80 percent actuarial value). The higher premiums would in turn lead to higher federal payments for Marketplace tax credits because such payments are tied to the second-lowest-cost silver plan premium. All tax credit–eligible Marketplace enrollees with incomes up to 400 percent of FPL would receive larger tax credits, not just those eligible for CSRs.

OK, so that's 2018. What about 2019? In addition to everything listed above (CSR cut-off, shortened enrollment period, etc), there's three new types of sabotage being implemented by Trump and Congressional Republicans: Actual repeal of the individual mandate; expansion of non-ACA compliant Short-Term Plans (STPs); and expansion of non-ACA compliant Association Health Plans (AHPs). Keep in mind that there's a big difference between raising premiums slightly just in case the IRS doesn't enforce the mandate penalty and raising them significantly once the penalty is actually repealed altogether.

OK, so what impact is this new suite of sabotage policies going to have next year?

Well, once again, there's the Urban Institute, which projects that...

It's important to note that when all 50 states + DC are included, the Urban analysis projects the average sabotage-specific premium impact to be more like 16.6% nationally.

There's also this very rough, blurry, early projection from a presentation at the National Health Policy Conference, which suggests around a 20% overall average rate increase, with 2/3 of that (around 14%?) being sabotage-specific.

For expansion of short-term plans, the HHS Dept's. official chief actuary projects federal spending on increased subsidies to cover the increase premiums will amount to $1.2 billion next year alone. How much would $1.2 billion represent in terms of premium increases? Well, that's a bit tricky since it also relies on knowing how many healthy people would be dropping their ACA-compliant coverage to move to junk plans, but I can take a shot:

UPDATE: D'OH!! It turns out I didn't even need to do all that back-of-the-envelope math; I found the link to the HHS Chief Actuary Report itself! 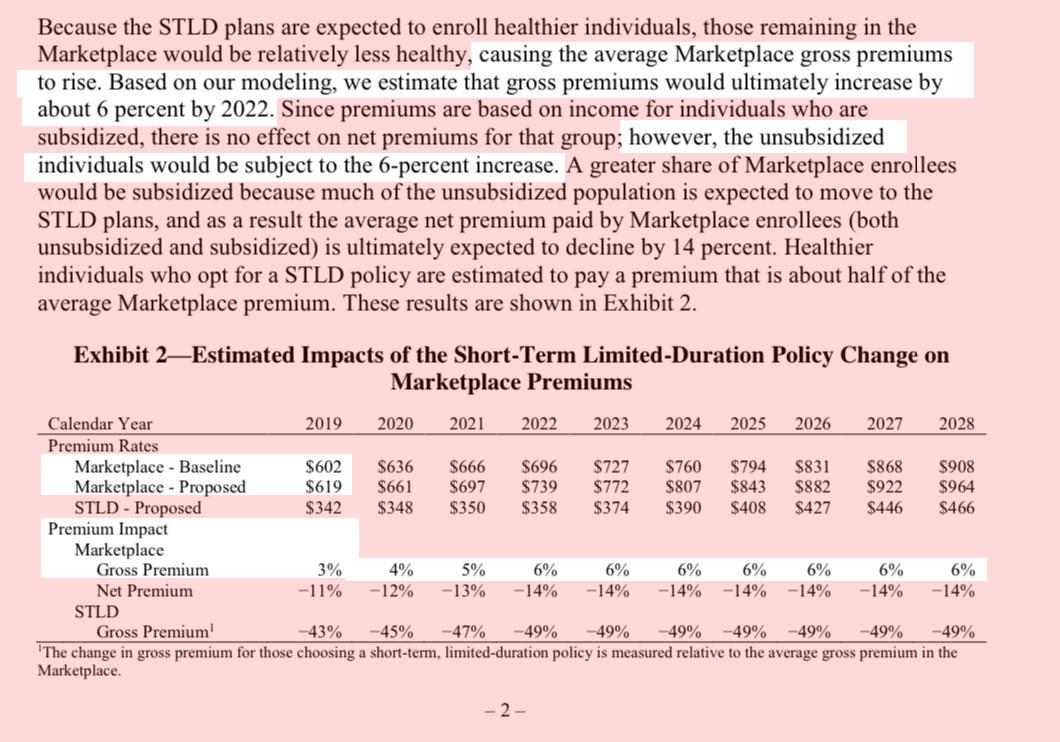 That's a 3% increase in unsubsidized premiums in 2019 specifically due to expansion of short-term plans alone, rising to 6% by 2022.

Of course this still doesn't account for association plan expansion. For that, I turn to a new analysis from The Actuary magazine, which suggests 1.4% - 4.4% increase in claims on the individual market due to cannibalization by AHPs...which, in turn, means at least somewhere around a 3% premium increase.

Add up all 3 (10% mandate repeal, 3% short-term plans, 3% association plans) and you're talking about around a 16% average premium spike in 2019 due to this year's ACA sabotage.

...which, as it happens, is almost identical to what the Urban Institute is projection as well (16.6% nationally on average).

All of which brings me to the actual headline of this entry:

Using estimates from the Urban Institute, this column projects average state-by-state premium increases for 2019, in dollars. Estimated premium increases due to these acts of marketplace sabotage average $1,013 nationally for benchmark premiums for a 40-year-old individual.

...Combined, the recent tax law’s repeal of the individual mandate and the administration’s short-term plan rule will undermine the individual insurance market and increase premiums for ACA-compliant coverage.

Using the Urban Institute’s projections of the average percent premium increase due to these two actions, CAP estimated the potential premium increase in dollars for each state in 2019. For example, in Tennessee, the 2019 annual premium for a benchmark plan for a 40-year-old would be $1,727 higher due to the two Trump administration policies. While premium tax credits may cushion the blow of rate increases for lower-income enrollees, unsubsidized consumers will pay for the premium hikes out of their own pockets. Results for all states are displayed in Table 1.

UPDATE: I just realized that the CAP state projections are based on the older version of the Urban Institute analysis; they posted a revised version of the report which corrects/updates the status of both Vermont and Washington, which also slightly changed their national impact projections. I've whipped up a corrected version of the table above (which is also a bit easier to read, I should note!):