"Rate Watch": Protect Our Care takes my Rate Hike Project ball and runs with it

For three years now, I've been painstakingly tracking the annual average rate increases for ACA-compliant individual market policies across all 50 states (+DC) and nationally, including both the on & off-exchange markets in as much detail as possible, and at the risk of tooting my own horn too much, my track record on this has been pretty damned accurate:

Note: When looking at the pie chart below, there are two important things to keep in mind: 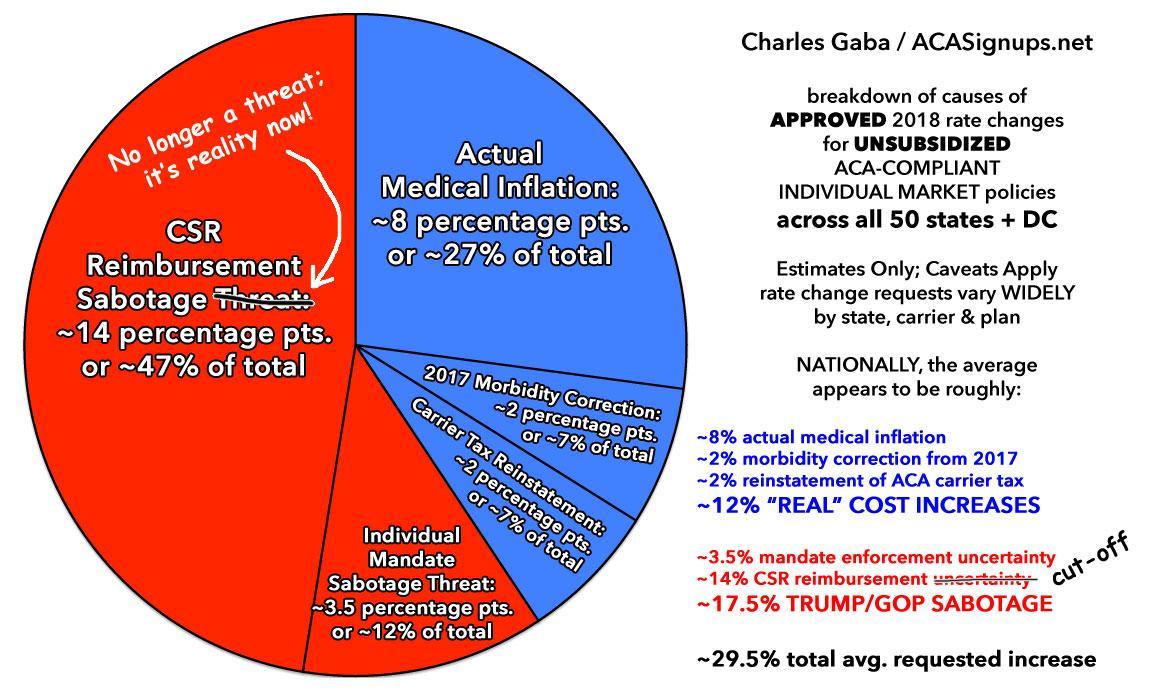 For 2019, there's a couple of new/enhanced sabotage tactics being pushed by the Trump Administration, primarily the actual repeal of the individual mandate and the stripping of restrictions on short-term and association plans. The first few preliminary 2019 rate filings have already started to come out from Virginia, Maryland and Vermont, and I'm of course doing the same thing for a fourth year in a row:

Of course I'll be archiving all 50 states as the filings are released at this link.

Well, healthcare policy advocacy organization Protect Our Care has just launched their own, higher-tech version of my own Rate Hike Project with a new website called, simply enough, "Rate Watch":

While spending most of last year trying to repeal the Affordable Care Act and waging a war on our health care, President Trump and Republicans in Congress have also used their control of Washington to actively undermine the health insurance marketplaces every chance they get – leading insurance companies to raise premiums for 2018 and 2019 and, in some cases, forcing them out of the individual market altogether. At the same time, they gave insurance and pharmaceutical companies hundreds of billions of dollars in tax breaks.

Washington Republicans’ goal is simple: Sabotage and undermine the affordable care act, then blame everyone but themselves for the consequences of their actions.

They include a slick interactive map and so forth, and will presumably be including additional information/links that I might not do myself, but at the end of the day, this is really just a higher-profile, better-funded version of what I've been doing myself for three years now. (I'm not criticizing them for this--I'm thrilled that more people will be educated/informed about the causes behind the rate increases--but I admit to finding it a bit amusing).