NOTE: THIS IS A LIVE BLOG, SO CHECK BACK FREQUENTLY FOR UPDATES.

Yes, at long last (3 weeks later than last year, which itself was 4 days later than in 2016), the Centers for Medicare and Medicaid has finally released the official, final 2018 Open Enrollment Report. Let's dig in!

This report summarizes enrollment activity in the individual Exchanges during the Open Enrollment Period for the 2018 plan year (2018 OEP) for all 50 states and the District of Columbia. Approximately 11.8 million consumers selected or were automatically re-enrolled in Exchange plans during the 2018 OEP. An accompanying public use file (PUF) includes detailed state-level data on plan selections and demographic characteristics of consumers. The methodology for this report and detailed metric definitions are included with the public use file.

The 2018 OEP Final Report includes data for the 39 states that use the HealthCare.gov eligibility and enrollment platform, as well as for the 12 State-Based Exchanges (SBEs) that use their own eligibility and enrollment platforms. Demographic and plan information for consumers with a plan selection provided by all 50 states plus DC include: age, metal level, and whether the consumer had advance payments of the premium tax credit (APTC) or cost sharing reductions (CSR).

For the 39 states that use the HealthCare.gov platform, additional data are available, including gender, rural location, self-reported race and ethnicity, household income as a percent of the federal poverty level (FPL), and the average premiums among consumers with and without APTC. Data files with information on plan selections at the county and zip code levels are also available for HealthCare.gov states.

OK, that's the housekeeping and basics. The 11.8 million figure is well known, of course, although the official tally is about 10,000 fewer than my earlier data suggested (there's always a bit of last-minute number tweaks when the final report comes out due to clerical glitches and so forth, so this isn't suspicious). The final official number is 11,750,175 QHP selections nationally.

Table 2 summarizes selected demographic and plan characteristics for consumers during the 2018 OEP; additional information is contained in the accompanying public use file. Nine percent of all Exchange consumers were younger than 18 years old. Nationally, 83 percent of consumers had their premiums reduced by APTC. 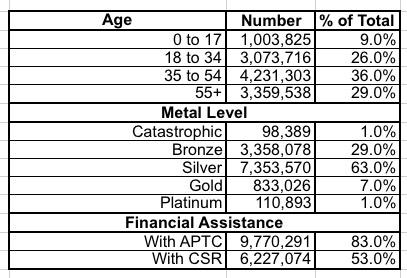 The most important data to look at here will likely be the metal level shift on a state-by-state basis, due to the impact of Trump cutting off CSR reimbursement payments and the carriers responding by going with Silver Loading and Silver Switching strategies to cancel out/mitigate the CSR cut-off damage. More on this later.

Table 3: Demographic and Plan Characteristics of Consumers with 2018 OEP Plan Selections on HealthCare.gov 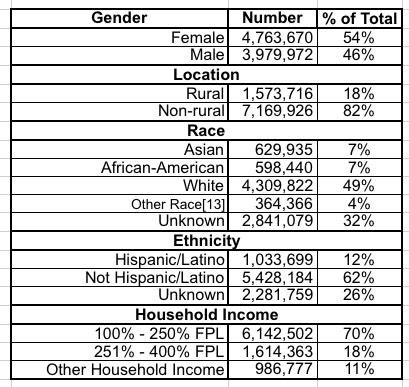 Table 4 contains information on premiums for consumers in states that used HealthCare.gov in 2018. The average premium before application of the tax credit was $621 during the 2018 OEP and $476 during the 2017 OEP. Eighty-five percent of consumers who selected or were automatically re-enrolled in a 2018 plan through HealthCare.gov had APTC. Among consumers with APTC in 2018, the average tax credit covered about 86 percent of the total premium, resulting in an average premium after APTC of $89 per month.

Table 4: Average Premium and Average Net Premium after APTC for Consumers with a 2018 OEP Plan Selection on HealthCare.gov

Voila. There's the power of the ACA's tax credits, and the main reason why most exchange enrollees plan on sticking around next year, as the Kaiser Family Foundation determined this morning: 83% of exchange enrollees are protected from premium rate increases (and this year, thanks to Silver Loading/Switching, many of them saw a net premium decrease).

The state-level PUF can be found here.

The report includes a whole mess of footnotes:

UNFORTUNATELY, I have to take care of a family committment right now, so I won't be able to get back and actually dig into the numbers until this evening.