In a comment from a Mother Jones article about Obamacare enrollments, I just received the highest praise I could hope for:

I'm also extremely happy to report that thanks to California finally updating their official numbers (partly spoiled by yesterday's November HHS Report), the official ACASignups.nettally has shattered through the 600K mark, and now stands at:

Meanwhile, check out the trend/projection line, which has jumped from around 3.7 million up to around 4.2 million by 3/31/14.

This is both bad and good. The bad news is that the CBO projection for the end of the enrollment period–which was never declared a “requirement for success” by the HHS Dept. but which has, nonetheless, become etched in stone to the media and public at large as being a “must achieve” figure–is 7 million private plan enrollments, leaving the ACA exchanges 2.8 million short at this point.

The good is that even the updated projection line is about to be left in the dust.

That’s a tall order, but at the moment, California alone is handling over 27% of that.

7 million is more than doable. 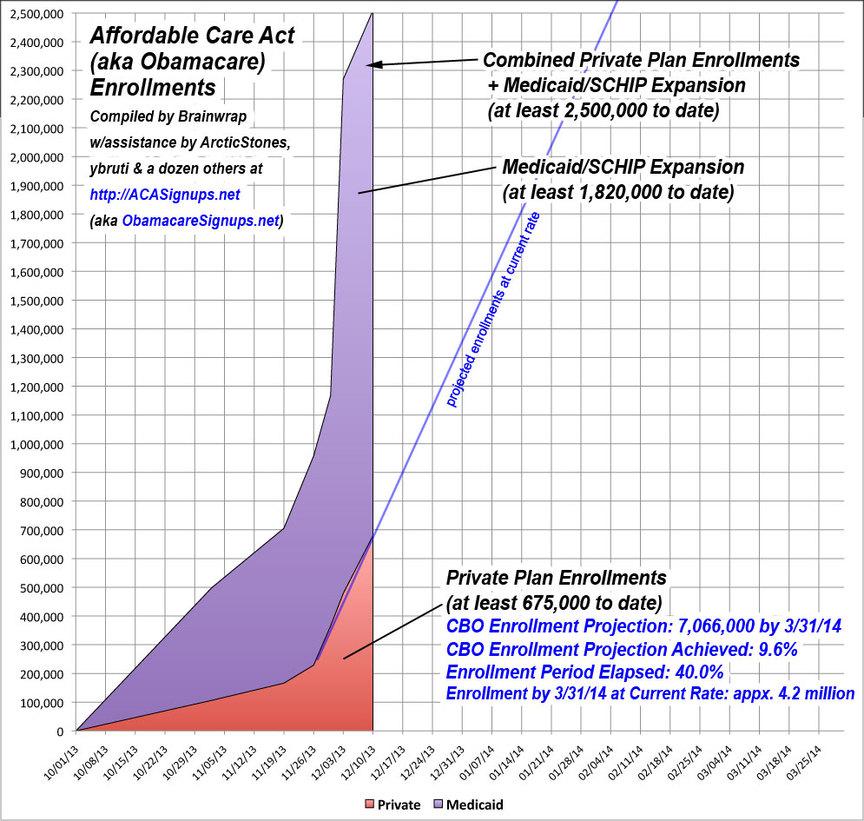 --As you can see on the spreadsheet itself, I've started adding a new column at the right--small explanatory notes (there's too many to avoid now).

--This also means that I'm going to drop it down from 2 weeks per worksheet to only one starting with Week 11 to clean things up some more, though the prior weeks are still available via the tabs at the bottom.

--Connecticut: Broke the 35K figure down 53/47 private/public based on the previous numbers, so that's around 18,600 private enrollments. CT is now at over 56% of their CBO "target" enrollment number!

--Vermont: An astonishing announcement by Gov. Shumlin that their enrollment has skyrocketed to a whopping 45,000 people in just the past week or so. I've broken this down to 23.4K private / 21.6K Medicaid based on their prior numbers, but still find it hard to believe that their total enrollment went up 4.6x in just 11 days.

However, there are 2 different articles using thsi figure, and both articles seem pretty certain about it even if one of them used the "applied" term.

--Washington: Excellent numbers, but they keep using that damned "completed applications" / "only step left is to pay" contradictory language. I think I'll contact the reporter for clarification, but it was 2 different reporters using the same language for both articles! ARRGH!!

--West Virginia: Woo-hoo! This is the first reliable source that's included the larger Medicaid expansion figure in as simply "Medicaid expansion". That means I can kill one of the "orange special" cells!

With that, I'm closing out Week 10 and will move to Week 11 tomorrow.

In other news, The HHS Dept. has launched the SPANISH-language version of Healthcare.gov, aka CuidadoDeSalud.gov/es/

UPDATE x2: As a follow-up to the Washington State confusion, Here's a perfect example of the problem with trying to get consistent numbers from the different states:

@amylanda Need clarification re. your 12/3 ACA story: 43K "completed apps" but "only need to pay as final step"... enrolled or not? Thanks.

@amylanda Except that would hold true for about 90% of ALL "enrollees" nationwide (including myself). I'm ENROLLED in a plan...via HCgov here in Mich but haven't actually PAID BCBSM yet. Every other story/link defines "enrolled" as "selected plan".

Amy Snow Landa ‏I'm using the definitions provided by the Washington Health Benefit Exchange, which runs the state exchange here in WA...That's interesting. Here in WA, they distinguish between completed apps and enrollment. They are two different categories.