1. Obviously this 100K figure is preliminary, and they don't provide a specific source, so there's no way of knowing how accurate it is.

2. Assuming it's correct, that's 100,000 "individuals who successfully selected a plan", which doesn't specify whether that's households or actual people, so that 100K could potentially be up to 2x the number of actual people.

3. Important: This is for the FEDERAL website only, and does not include the 14 state-run exchanges, which have been doing much better and post their numbers separately

4. Also, that 100K figure is apparently only for the Healthcare.gov WEBSITE itself, not necessarily enrollments that were called in, faxed in, mailed in or filed directly in other ways.

All that being said, the current tally for actual enrollments now stands at at least 330,000, plus an additional 1.38 million Medicaid/SCHIP expansion enrollees, for a total of at least 1.7 million people enrolled through the ACA total: 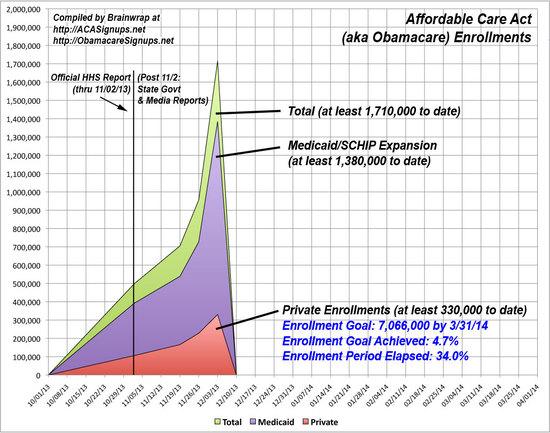 Now comes the speculation part: I'm guessing that, assuming the HC.gov Nov. 100K figure is accurate, when the final November figures for the other 14 exchanges plus any faxed/phoned/mailed-in enrollments come in, the total will be at least 400,000 people (if you recall, I predicted between 350K - 400K total for the first 2 months a few weeks ago, so this would be at the high end of that).

If that's the case, that would mean that enrollments tripled (106K in October + 300K in November). Assuming that the number doubles each month going forward, that'd be 600K in December, 1.2 million in January, 2.4 million in February and 4.8 million in March, which would easily hit the magic 7 million mark. Obviously it's unlikely to play out so neatly; there'll be spikes and lulls, and that would still leave a few million with a 2-3 month gap in coverage, but it's still reassuring (to me, at least).

Important Update: dKos member and ACASignups helper ybruti pointed out a VERY important article in the Washington Post from last week: Apparently the "magic 7 million" figure is NOT an actual goal:

The 7 million number isn't a goal so much as it's an estimate. It comes from the Congressional Budget Office's May 2013 projection of how many people would sign up for insurance under Obamacare. But that projection didn't foresee two months of a non-functional federal health exchange. Or, to put it simply, that estimate is already wrong. It should be thrown out entirely.

Back in July, when Sarah Kliff and I asked the White House how they defined "success" in 2014, they always defined it as a function of the mix of people in the exchanges -- the "ratio" -- rather than the number of people in the exchanges. On this, the administration was clear: More wasn't necessarily better. Twenty million enrollees would be a disaster if only 1 million of them were young and healthy.

I'm still going to keep the 7 million "goal" for the moment, if only because it's still a worthy goal and one which I think we can still reach. Plus, at this point, politically, the "7 million" figure has been effectively etched in stone in most people's minds; if they don't hit that (or at least come close), people will assume the ACA is a failure regardless of the reality. However, I'll at least bring attention to this point.