We did run into two minor technical issues: First, we encountered an error upon logging into her newly-created account for the first time. However, after waiting a few minutes and logging back in, all was well. Then, after completing the tax credit form successfully, the screen never gave a "completion" notice; it went through the thinking animation and then defaulted back to the same screen. She clicked "Confirm" a second time and the same thing happened.

However, upon checking her email, sure enough, she received not one but two confirmation messages, with links to download the PDF file that includes your official subsidy info.

One other thing: If you try opening up this PDF with OS X Preview, it may appear to be white text on a white background; we had to open it using Adobe Reader in order to actually read it. Another bug they really have to fix, but more of an annoyance.

I should also note another extremely irritating thing that they should fix ASAP: At one point we had to go back and make a minor correction to one of the financial fields. As anyone who's gone through the process knows, if you go back and edit anything, you pretty much have to re-enter all of the fields from that point forward again. This doesn't take too long (now), but is still highly annoying and could easily cause people to mess up other info.

We then went in and enrolled in the appropriate insurance plan. We went with one of Blue Cross's plans, and our tax credit, while small, is large enough to at least be worth going through the process. Really, the new plan is similar to the old one; it costs about $150/month more, but also covers more stuff, so it should pretty much be a wash in the end.

The whole process took about 40 minutes. I've actually gone through the application process several times already and could have done it in half the time by now, but my wife understandably wanted to be a bit more careful and read over the various steps again.

One thing that should be of interest to Michigan residents: When you browse the insurance plans, BCBSM is listed as "Blue Cross Blue Shield of Michigan Mutual Insurance Company".

This confused both of us for a few minutes, because I've lived in Michigan my entire life and have never heard or seen BCBSM include "Mutual Insurance Company" as part of their official name. So, we ran a search and found this article from last March:

Blue Cross Blue Shield of Michigan is likely to get its wish and become a nonprofit mutual company under legislation that is now headed to the governor, who is expected to sign the measure.

Anyway, we went ahead and completed the process. One other thing that made us a little nervous is that she hasn't received a confirmation email yet, but we did get a screen shot of the final confirmation process.

For those curious about the payment situation (we weren't sure whether we're supposed to pay through the website, or through BCBSM or what), here's what it said on the confirmation screen at the very end:

"To activate your new coverage, you must pay  your first month's premium by your plan's due date. Your plan will contact you in the next few days with details on how to pay, or visit your health plan online to make your payment now if your plan accepts online payment. Your payment must be received and processed by the effective date to be fully enrolled. Contact the plan's customer service if you have any payment questions or issues."

Under that they list the company name, premium amount and effective date (1/1/14).

At the bottom is a big "Pay for Health Plan" button, but it's grayed out at the moment, so presumably BCBSM will contact us this week re. payment details. 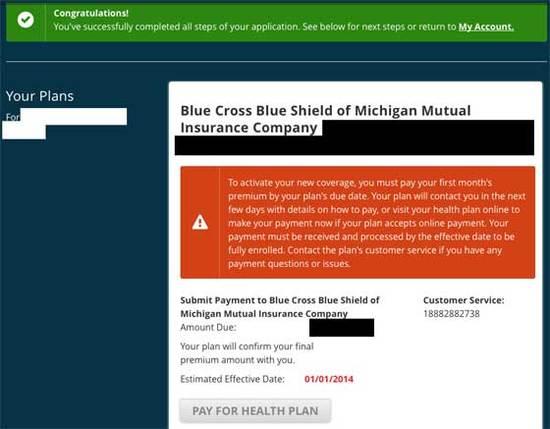 Anyway, we're done...or at least as done as anyone else in the country.

Meanwhile, after an explosion of huge enrollment figures being released, the state-by-state numbers have stopped coming in for the past day or two, which is fine. I assume that the HHS Dept. will be releasing their official November enrollment report sometime this week, and we'll see just how close (or dead wrong) the ACASignups.net spreadsheet is.

My prediction for the cumulative enrollments, nationwide through 11/30 still stands at around 410,000 (yes, I know the spreadsheet lists 439,000, but that includes about 60,000+ from the first few days of December).

Anyway, whatever the tally currently is, you can increase it by 3 for my wife, my son and myself :)