That was then. This is now.

New numbers from RI, MD, KY, CO and especially California have now brought the tally up once again; we now stand at: 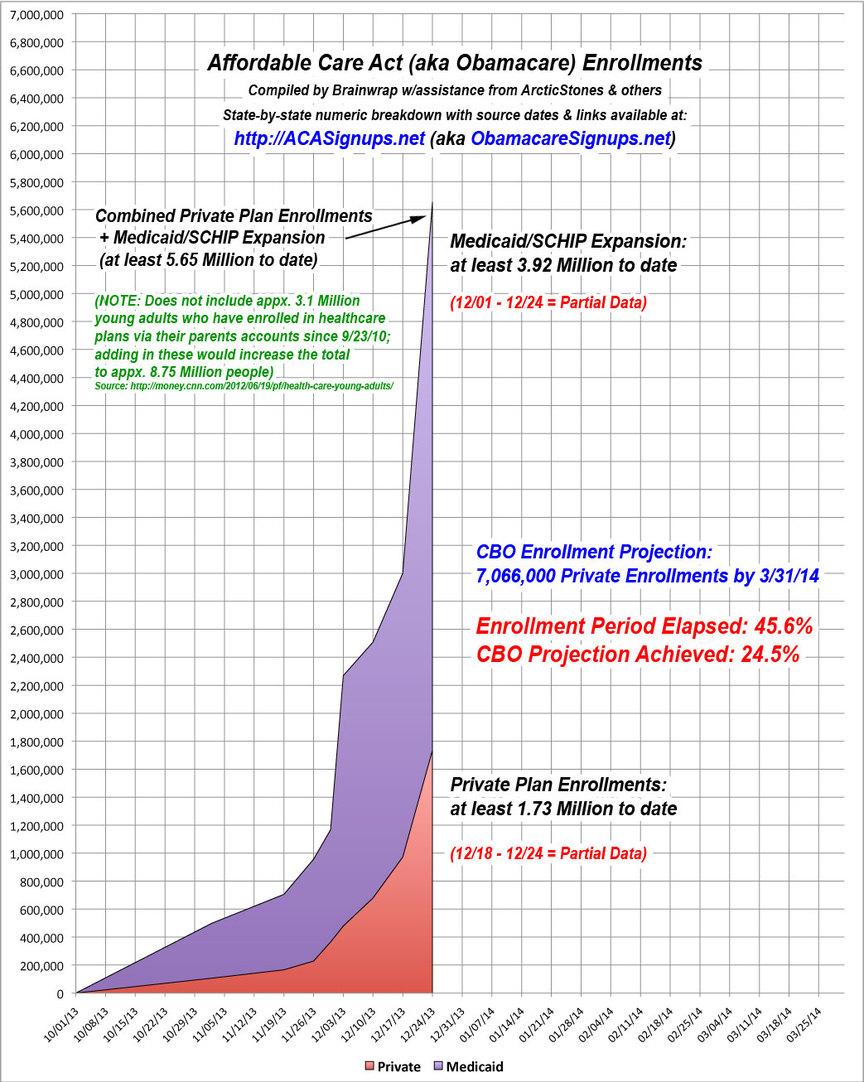 Another shout-out to ArcticStones, who brought me 4 of the 5 latest state updates in quick succession.

Oh, and re. the messy, 4-line California figures...they add up:

We now stand at over 24% of the CBO projection total, with 45% of the time elapsed.

2.0 million by the (new) deadline of Christmas Eve tomorrow night is doable at this point.

I don't mean to be an ass, but people keep saying "where are you getting these numbers?" and "can you provide a source link?", when it clearly states that every single number source is dated & linked at ACASignups.net.

UPDATE: Hold the phone, New York's latest numbers just came in, and they're actually 16,000 higher than I had projected.

Most of these were legitimate issues during the chaotic, bug-filled month of October and early November. However, one by one they've all been resolved, leaving the GOP to move on to other talking points. Now that 1.75M people (potentially 2 million by tomorrow nights' deadline, possibly up to 2.3 million by New Year's) have enrolled, the next Big Attack line is:

"But how many have actually PAID???"

On the one hand, this is a rather stupid question. Few people are going to pay for a $500 - $1,000/month service more than a week or so earlier than they have to when it doesn't even kick in until January 1st. Plus, it's disingenuous--if you buy a new car with a "$0 Down" financing offer, you still get to drive the car home and the auto dealer still gets to book the sale in the inventory system.

Now, it is true that some percentage of enrollees--as in any retail situation--are going to stiff the merchant, and certainly the lingering technical concerns about the data transfer and billing systems are worth keeping an eye on. However, as a talking point, it's pretty weak tea.

HOWEVER, if you really do feel the need to answer that question, Washington State is probably the best source to look at. Unlike the other 49 states (Federal- and State-run alike), the WA exchange is the only one that is officially defining "enrolled" as "having purchased a plan and already made the first month's payment. As a result, the reporting on WA has been specifically broken down as follows, as of last week:

So, assuming every state is following a similar pattern, the answer is, "about 1/3 of those enrolled have actually paid already...what's your point?"