UPDATE: Meanwhile, the ACA has forced carriers to pay back $3.24 BILLION in excessive charges since 2011. 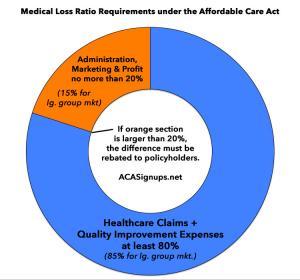 One of the least-known but most important aspects of the Affordable Care Act is the Medical Loss Ratio:

The Affordable Care Act (ACA) includes several provisions that change the way private health insurance is regulated in an effort to provide better value to consumers and increase transparency. One such provision – the Medical Loss Ratio (or MLR) requirement – limits the portion of premium dollars health insurers may spend on administration, marketing, and profits. Under health care reform, health insurers must publicly report the portion of premium dollars spent on health care and quality improvement and other activities in each state they operate. Insurers failing to meet the applicable MLR standard must pay rebates to consumers beginning in 2012.

Health insurers collect premiums from policyholders and use these funds to pay for enrollees’ health care claims, as well as administer coverage, market products, and earn profits for investors. The Medical Loss Ratio provision of the ACA requires most insurance companies that cover individuals and small businesses to spend at least 80% of their premium income on health care claims and quality improvement, leaving the remaining 20% for administration, marketing, and profit.1, 2 The MLR threshold is higher for large group plans, which must spend at least 85 percent of premium dollars on health care and quality improvement.

At first glance this sounds unenforceable; it sounds like if you pay $6,000/year in health insurance premiums, under the ACA, in theory your insurance company is required to spend at least $4,800 of it on actual medical expenses, whether you have a sick or healthy year, which is of course impossible to project.

How it actually works is in the aggregate: If an insurance company brings in, say, $60 million in individual market premium revenue, at least $48 million of it (80%) has to be spent on actual medical claims, as opposed to marble floors for the corporate headquarters, CEO bonuses or company junkets to Tahiti. Anything below that 80% threshold (or 85% for the large group market) has to be refunded to the policyholders.

The idea is to help prevent insurance carriers from price gouging, of course. Most state insurance commissioners have some level of authority over insurance carrier rate hikes, but that authority varies greatly. In some states they have absolute veto power, while in others all they can do is try to publicly shame the carriers into knocking their rates down. Even in states where the commissioner can put the kibosh on excessive increases, enforcement of that depends greatly on how much the commissioner and/or their regulatory staff care about the issue. Thus, the MLR rule is supposed to act as a first line of defence in some states and a second line in the rest. 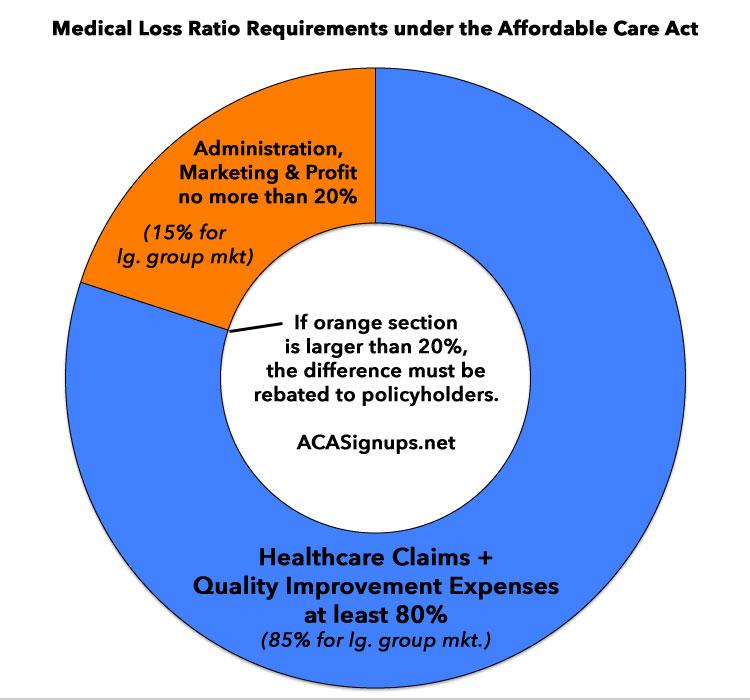 I've written about the MLR rule before, in particular about how it's a great example of the Democrats being better than the GOP on policy but worse on optics/marketing. The short version is that insurance companies have been quietly paying back billions of dollars over the past six years...but hardly anyone knows about it.

There are a couple of reasons for this. The first is that about $2.1 billion of that $3.2 billion, or nearly 2/3 of it, has actually been paid back to employers who provide insurance to their employees...and in many cases, the employee may never actually directly see the rebate themselves:

In the case of employer-sponsored insurance plans, the cost of coverage is often split between the employer and employees. Therefore, for many employer-sponsored plans, the handling of refunds to employers and employees may depend on the plan’s contract and the manner in which the policyholder and participants share premium costs. Insurers will be responsible for ensuring that rebates benefit consumers proportionally to the amount they contributed toward premiums. In some cases, rebates may be provided in the form of a discount on premiums instead of a cash rebate. If the amount of the rebate is exceptionally small ($5 for individual rebates and $20 for group rebates), insurers are not required to process the rebate, as it may not warrant the administrative burden required to do so.

In other words, the employee may see their out of pocket cost for the following year's health plan go up by less than it normally would, but to the best of my knowledge, their employer never has to explain why rates only went up a little bit. I'm not entirely sure whether the employer is even legally required to pass their share of the rebate along to the employees at all...and even if they do, I don't think they have to include an explanation about where it came from. All the employee knows is that instead of their share going up by, say, 10% next year it's only going up by 5% or whatever.

As noted in the just-released annual MLR report:

In the small group and large group markets, the rebate is generally provided to the employer, who must provide the employee rebates in one of the three ways rebates are provided to consumers in the individual market (described below) or apply the rebate in a manner that benefits employees. In the individual market, rebates are provided directly to consumers in one of the following ways: as a check in the mail; a reimbursement to the account that was used to pay the premium; or a direct reduction in their future premiums

"...apply the rebate in a manner that benefits employees" sounds pretty vague to me...that could mean just about anything.

The other reason is that even for the other 1/3 (around $1.14 billion to date) which goes to individual market enrollees, to the best of my knowledge the carriers don't have to come right out and say "you're getting this money thanks to Obamacare!" or anything like that; presumably it just includes some sort of wonkspeak about "as required for compliance with subsection 123.b of the federal tax code" or something along those lines. The point is that very few of those who receive the ACA's MLR rebates likely have the slightest clue that they receive them at all, and if they do, they likely have no idea that they can thank the Affordable Care Act for the savings. In addition, the MLR rebates get paid back whether you enroll on or off the ACA exchanges, so someone who enrolled in an off-exchange policy in 2016 and received a check last year is even less likely to know that Obamacare is responsible for it.

Beginning in 2012, insurers failing to meet the applicable MLR standard for the prior year must issue rebates to consumers proportionate to the amount in premiums paid by each consumer.14 As medical loss ratios are calculated using aggregate data, rebates are not based on the experience of an individual enrollee or group. Instead, MLR rebates are based on an insurers’ overall compliance with applicable MLR standards in each state it operates. Over time, rebates will be based on cumulative data over three-year periods. All rebates must be issued to consumers by August 1st of the year following the applicable MLR reporting period (i.e., August 2012 for the 2011 reporting period).

In other words, if you received a small check in the mail last summer from your insurance company (it averaged about $114 last year), the odds are that you can thank Obamacare for it.

UPDATE: OK, looks like I made several false assumptions above:

Just one note: insurers are required to send notices to all members part of rebates (including group members), even if the check is being sent to the group. Although folks throw out random letters from their insurer no matter how much love was put into folding and sending them...

The form letter Sanders refers to does indeed specify that the rebate check (for those who receive one) is indeed due to the ACA...but again, only a fraction of the total beneficiaries are actually getting a check, and as Sanders notes, most people are likely cashing the check while ignoring where it came from. All I know is that out of the 10 million unique individuals or so who have likely received a rebate over the past 5 years, I've never heard from a single person who's mentioned it on social media, and there's barely been a peep about it in the news outside of the healthcare world.

In addition, I should clarify that I'm referring to the non-healthcare media at large who tended to ignore it, not CMS itself:

I can't answer for the 4th estate. When I was in the House, MLR rebates were a key part of district comms packets to show early results of the ACA. Not everyone pays attention to everything

True. Not many interested in 'good' news. Also, there we bigger fish during those times...court cases, 'glitchy' websites, 'sideways' elections, etc.

UPDATE x2: And of course, as soon as I published this blog entry...

We got two checks early on.

Very first year Obamacare went into effect, I got a $700 rebate from Aetna. (after 5 consecutive years of >30-50% premium rate increases).

Then, Aetna bailed from the marketplace. That's when I knew; the ACA was good policy.

Had an individual Blue Shield policy and got a check (about $400) after the first year. Nothing since. I was shocked.

We got one a couple of years ago. It was small like $20 or $30. I remember reading the letter and being impressed the system worked as intended.

In any event, the Centers for Medicare & Medicaid (CMS) recently issued their latest annual report, confirming that around 900,000 individual market enrollees (roughly 5% of the total indy market, or 6% of the ACA-compliant market) received an average of $114 apiece thanks ot the ACA's MLR rule, for a total of about $103 million nationally. 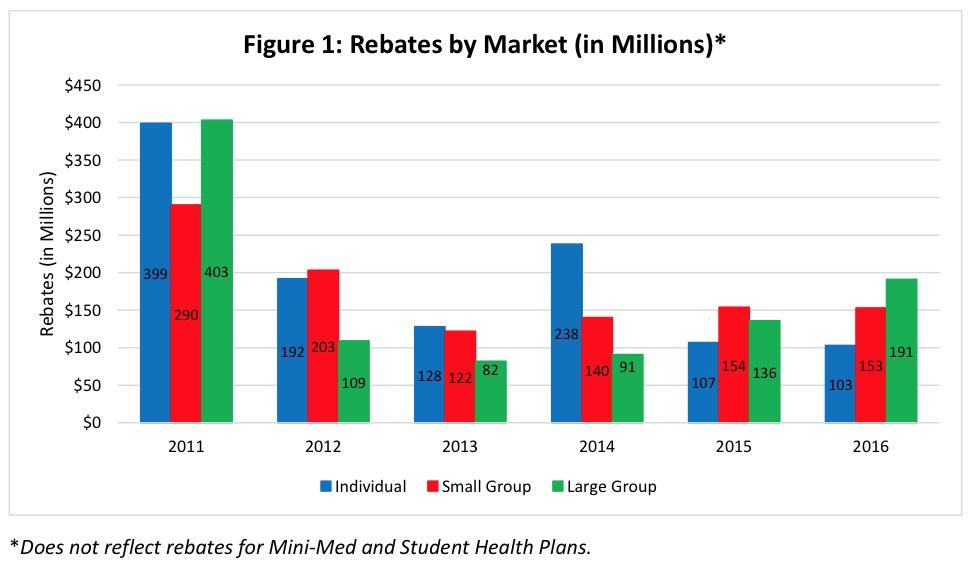 Here's the state-by-state breakout for 2016: 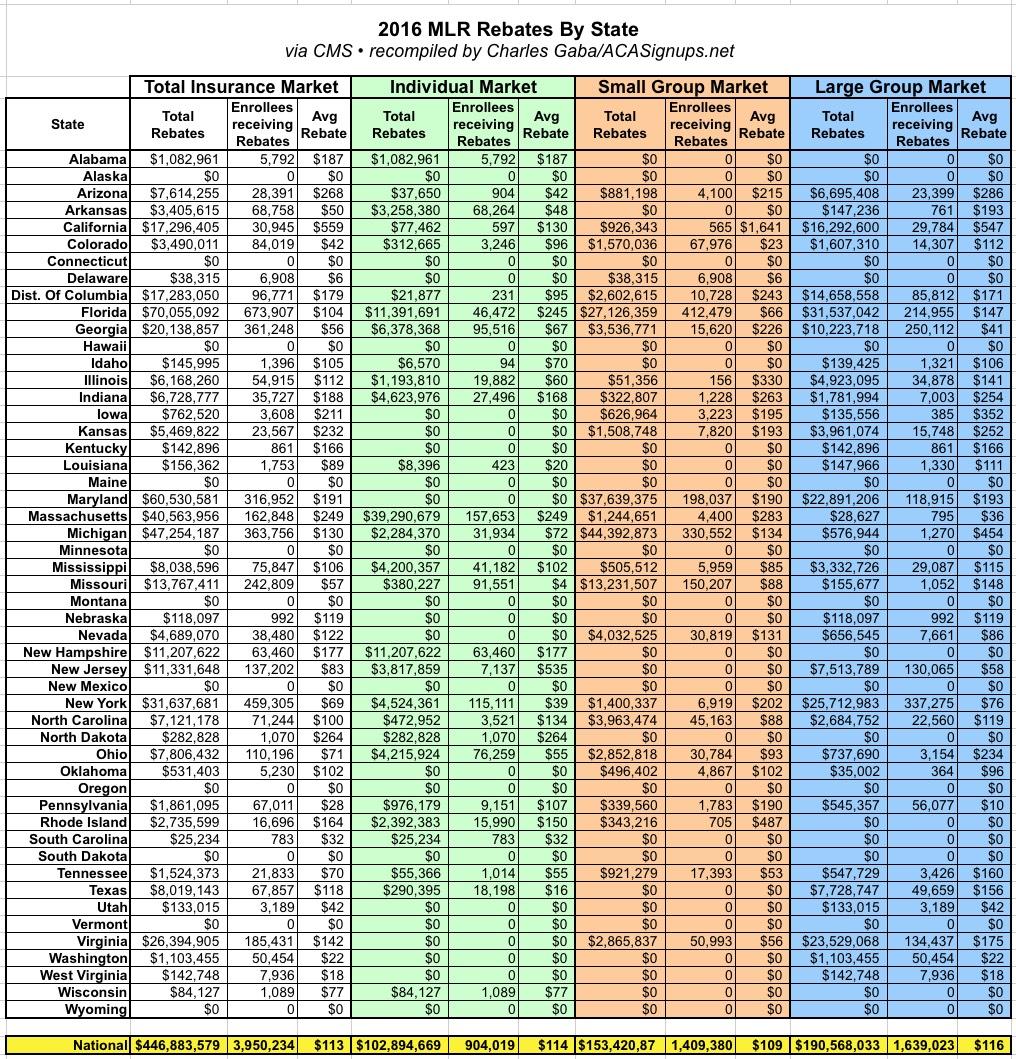 In my own state of Michigan, about 363,000 people received rebates averaging $130 apiece: 32,000 on the individual market, 330,000 in small group plans and just 1,270 in large group plans; apparently the carriers offering large group and individual policies have pretty much figured out where they need to be in Michigan, while small group carriers are still trying to stabilize their market, which is interesting since it's usually the individual market which has the most uncertainty.

Of course, since Donald Trump has absolutely zero shame and loves taking credit for anything positive that he had nothing to do with, I guarantee that he's going to try and take credit for these payments this summer ahead of the midterms. I wouldn't even be surprised if he instructs his incoming HHS Secretary to have that stupid "MAGA!" printed in the memo section of the checks themselves.

UPDATE: Oh, yeah...one other little tidbit about the Medical Loss Ratio provision of the ACA: It was added to the law by (former) U.S. Senator Al Franken.