Well, the good news is that to the best of my knowledge, Trump's HHS Dept. doesn't appear to be completely making up numbers out of thin air; the data in the final OE4 enrollment report seems to be within the range of my expectations. As I noted at the time:

Unfortunately, that appears to have been a short-lived policy. With Trump and HHS Sec. Price doing a full-court press to tear apart the very law of the land which they're supposed to be charged with enforcing to the best of their ability as long as it is the law, I wasn't terribly surprised to see this incredibly disingenuous report being relased last month by the Assistant Secretary for Planning & Evaluation (ASPE) on behalf of HHS:

...and so forth. In fact, I later pointed out a fifth, and even more important point: The ASPE report completely ignored APTC assistance, which cuts the premiums actually paid by roughly half the individual market down to size. When you add the missing states into the mix the national average 4-year rate increase drops to 95%, and once you also add in APTC, the average drops to just 22%.Of course, the other half who pay full price are getting hit with that 95% average increase, but still.

The following morning, Allison Marre, the national spokesperson for the HHS Dept. issued a press release using the ASPE report to trash the ACA, and even included the following:

Even Charles Gaba, the author of ACAsignups.net admits in his analysis, “The simple truth is: Yes, full-price, unsubsidized premiums for individual market healthcare policies probably have doubled since 2013…” His analysis of the report drives home that Obamacare’s one-size-fits all mandates and regulations have driven up prices for all.

I never thought I'd be mortified to be quoted in a formal HHS Dept. press release, but those ellipses are critical...because here's the part of the sentence Ms. Marre left out:

Don't fall for it. The simple truth is: Yes, full-price, unsubsidized premiums for individual market healthcare policies probably have doubled since 2013...but that's primarily because they have to actually cover healthcare and carriers can no longer cherry-pick who they're sold to.

Talk about cherry-picking! Yes, Ms. Marre shamelessly butchered what I said to completely ignore the point I was making.

Then, a week or so later, CMS released the Q1 ACA Exchange Effectuation report. This has been released around mid-June for the past 3 years straight, and tried to make hay out of the attrition rate seemingly being higher than in earlier years...but unlike the 2015 and 2016 reports, which included effectuated enrollment as of the end of March, the 2017 version actually only includes enrollees as of February. This is an important distinction, because due to the timing of the Open Enrollment Periods and the subsequent policy start dates, up to 500,000 more enrollees started their policies on March 1st. Assuming a similar payment/effectuation pattern to the rest of the enrollees, this means that an apples-to-apples comparison would show a similar or even better Q1 retention rate than prior years.

That brings me to a couple of days ago, when Caitlin Oakley (who was previously Tom Price's press secretary while he was a member of Congress) sent this out:

From: Oakley, Caitlin B. (OS/ASPA)
Subject: Failing for years...

Good morning – As this Wednesday’s deadline approaches for insurers to commit to selling plans on Healthcare.gov during the upcoming enrollment period, please take a moment to consider this important market update from last week:

Why are people abandoning Obamacare’s exchanges? Last week, CMS released a new report showing that the most common reason individuals didn’t pay for their coverage was high costs.

Obamacare is fundamentally flawed and has been failing for years. Please consider these additional facts:

Under Secretary Price’s leadership HHS has issued 18 rules and guidances to improve the current healthcare market. Actions HHS has already taken to offer Americans relief from Obamacare’s burdens can be found here: www.hhs.gov/relief

Let's review these bullets, shall we?

Don't get me wrong...a 10-20% hike (call it 15%) still isn't anything to cheer, but the CEO states point-blank that a huge portion of the hike...potentially 4/5ths of it...is due specifically to the Trump Administration and Congressional GOP's failure to guarantee the CSR reimbursements legally owed to the carriers, or that they'll enforce the individual mandate.

Since August 2016, CMS has collected online survey data from consumers who left the Exchanges. Participation in the survey is voluntary. Consumers who are signed up to receive emails are invited to take the survey within 30 days of leaving the Exchanges. From August 2016 to April 2017, a total of 18,212 individuals who responded had terminated or canceled coverage; of those, 14,332 initially paid for their plan and then stopped paying premiums and 3,880 selected a plan but never paid their first premium.

OK, the first thing to keep in mind is that this survey may not be representative given the voluntary nature of it. Assuming it is, however, only 21% of them never paid in the first place, while the other 79% paid for at least one month before dropping out.

Consumers who canceled coverage prior to paying their first premium indicated that high costs and lack of affordability were the most common factors for canceling their coverage, or not paying the first month’s premium. Nearly 60 percent of consumers who terminated coverage after paying premiums for at least one month indicated that they obtained employer sponsored coverage. The exit survey data show:

There's a lot of percentages listed here, but notice how they're sliced and diced in a pretty confusing manner. If you read this data carefully, I believe this is how it actually looks in context: 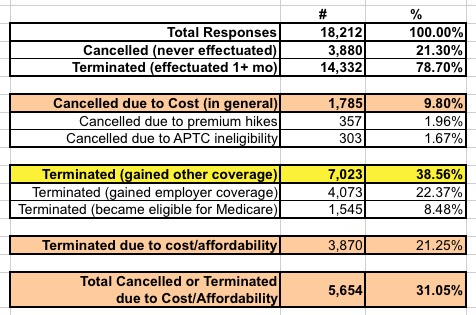 The "gained employer coverage" and "became eligible for Medicare" numbers are interesting, but I have no idea why these are supposed to be an attack on the ACA exchanges. According to HHS's own data, the single biggest reason people either cancelled or dropped exchange coverage over the course of the year is because they gain other coverage through an employer or by aging into Medicare (39%).

Now, "Cost/Affordability" does make up the second most common reason given (31%), and yes, that certainly is an important issue...but that's not the most common reason. In addition, note that the survey report doesn't provide a full breakout of the responses...which means there's no way of knowing what the other 30% of respondents had to say about why they didn't pay or dropped their coverage.

And finally, you have this one:

As I noted above, that 10.3 million figure was actually likely closer to 10.75 million as of March. On the other hand, as I was reminded in the comments, the monthly average enrollment is indeed likely to be closer to 10 million even, so that's a minor quibble in this context.

However, the larger problem is that "covered by Obamacare" also includes Medicaid expansion and BHP program enrollees. Here's what the CBO was actually projecting for 2017 back in 2010 (and remember, this was before the SCOTUS ruled that Medicaid expansion was optional for the states):

Yes, they were indeed way off base on the number of exchange enrollees: ~11 million vs. 23 million. And the nonelderly uninsured total is actually around 28 million today vs. the 21 million that the CBO was projecting. However, the Supreme Court's ruling 2 years later forced the CBO to knock 4 million off of their Medicaid/CHIP projection; this, combined with some other oddball changes (they doubled their estimate of employer coverage losses for some reason), meant that by 2013 the CBO was projecting the nonelderly uninsured rate to be closer to 30 million by 2017.

So regardless of the reasons, what actually happened:

Of course, if you add the 2.6 million people caught in the 19-state Medicaid Gap plus a chunk of the 1.4 million who are technically not caught in the gap but would be eligible for Medicaid under full expansion, that's well over a full percentage point of the 272M nonelderly Americans...which would knock the nonelderly uninsured rate down to 9%.

In other words, the CBO was off on the proportions--Medicaid expansion has proven to hold a much larger chunk of the total coverage gain than expected--but their overall projections turned out to be pretty close after all.

On a related note, a series of anti-ACA propaganda videos posted by HHS on YouTube and tweeted out by HHS Sec. Tom Price have raised some red flags:

Four Democratic members of Congress have called for an investigation into whether Health and Human Services (HHS) Secretary Tom Price and his department have engaged in “covert propaganda” or illegal lobbying by producing videos criticizing the Affordable Care Act (ACA), which were distributed via official social media accounts.

In a letter sent this week to the Government Accountability Office (GAO), the congressional Democrats cited tweets from both Price’s account—@SecPriceMD—and the department’s official media account, @HHSMedia.

...Federal law prohibits government departments from using taxpayer dollars to promote policies without making clear that those messages were produced by the government. The GAO in a 2015 decision pinged the Environmental Protection Agency (EPA) for similar conduct. The EPA had produced videos that supported proposed regulations through the Clean Water Act. The videos did not contain graphics or text that indicated that the EPA had produced them. Once the EPA circulated the videos online, they reached up to 1.8 million people who would not have had any way to know they were viewing government-produced content.

Of course, under the Obama Administration, the HHS Dept. regularly sent out pro-ACA messaging, press releases etc. The difference is that the ACA is the law of the land. In theory, I believe a nonpartisan department such as HHS is supposed to promote the existing law regardless of the partisan lean of whoever runs that department. In practice, I have no idea what standards are for this sort of thing. Back in 2009-2010 (before the ACA was signed into law) was the HHS Dept. regularly sending out pro-ACA messaging? I have no idea, since I wasn't on their mailing list at the time.

Oh, one more thing: In HHS's defense, there are two data points they included which are relatively straightforward: