Those who appreciate irony will love this one.

If you enroll in an ACA exchange policy via HealthCare.Gov (or any of the state-based exchanges), you have three options for the Advance Premium Tax Credits:

While the ACA is working very well for millions of people, there are also two groups for whom it has serious problems.

The first are those caught in the Medicaid Gap...incomes below 100% FPL, living in the 19 GOP-controlled states which chose not to expand Medicaid.

As I've noted many times before, my wife and I are caught squarely in the middle of this second group. We're both self-employed in a profession (website developer) where our income varies widely from year to year. Furthermore, we often don't know how much our income will differ from projections until the end of the year due to how our billing cycle works out. It jumps around quite a bit; one year we may break 400% FPL, the next it could be as low as 300% or lower. This makes it difficult to enter our "projected income" for the following year every Open Enrollment period. And yes, I've pretty much revealed my income to the world now.

In 2014 and 2015, we qualified for a not-huge-but-decent tax credit and had it applied to our monthly premium, cutting the bill down somewhat. The following year at tax time, you have to deal with two new tax forms to reconcile your actual income against what you expected to earn. In 2014 we misjudged and had to pay the premiums back; in 2015 we were right on target.

For 2016, we qualified for a whopping $34/month ($408 for the year), and decided to skip the monthly credit and save it until we did our taxes this spring. And that's what this blog post is all about.

You see, when you decide to wait until the following spring to take the credits, that also means that you don't notice anything odd which happens throughout the year.

In June 2016, we received a notice from HC.gov stating that there was some "missing information" they hadn't received, and since they hadn't received it, they went ahead and re-calculated our eligibility and determined that we were no longer eligible to receive any APTC at all. Basically, they had re-calculated our income to be a few thousand bucks higher than we had estimated in November 2015, bumping us off the list.

My wife called them up to straighten the issue out. The bottom line is that we were right, they were wrong, and they claimed that the issue had been straightened out and we could disregard the notice. We made the mistake of not getting confirmation on this, and promptly forgot about the issue. Again, since we weren't taking the credit month to month anyway, nothing changed from the premium payment side. 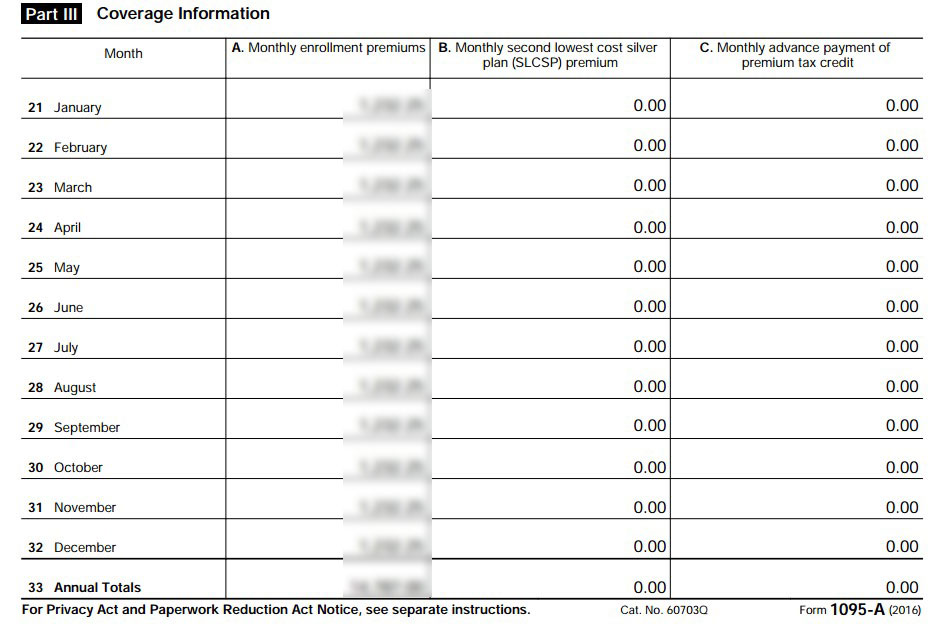 Column A is the full, unsubsidized premium. Column B is supposed to be the Benchmark Silver Plan Premium available to us, which (I later found out) was around $632/month. And column C is the APTC we were supposedly eligible for...which should be $34/month. Instead, both columns read $0.00. Yes, that's right: They never did actually resolve the June 2016 issue, so still had us down as not being eligible for any credits.

We filed our taxes on time, but have to go back and file an amendment for some other reasons unrelated to the APTC issue, but also wanted to sort this out as well.

The long story is that I've just finished spending over 2 1/2 frustrating hours on the phone with four different HC.gov customer support reps who gave me 3 different instructions about how to proceed.

The short version is that it turns out that I had to go to this Tax Tool at HealthCare.Gov and plug in our information in order to find out what the heck the SLCSP (benchmark premium) actually was last year: $632.48.

The amazing thing is that the tax tool states flat out that the amount listed on 1095-A may be missing or incorrect, which is kind of bothersome and reassuring at the same time: 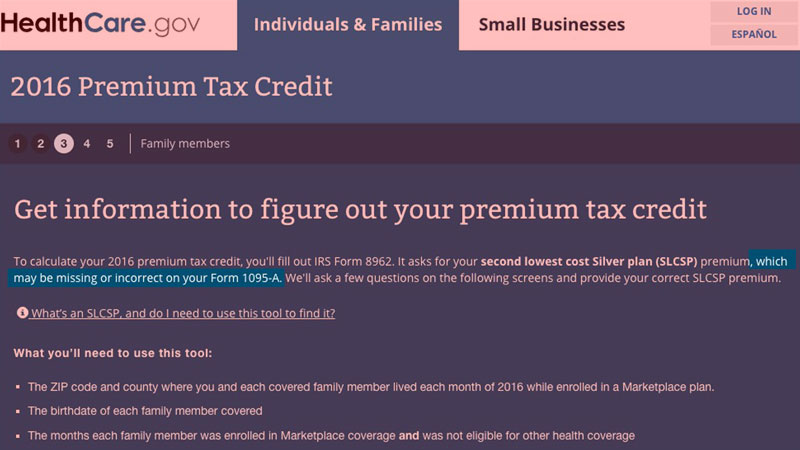 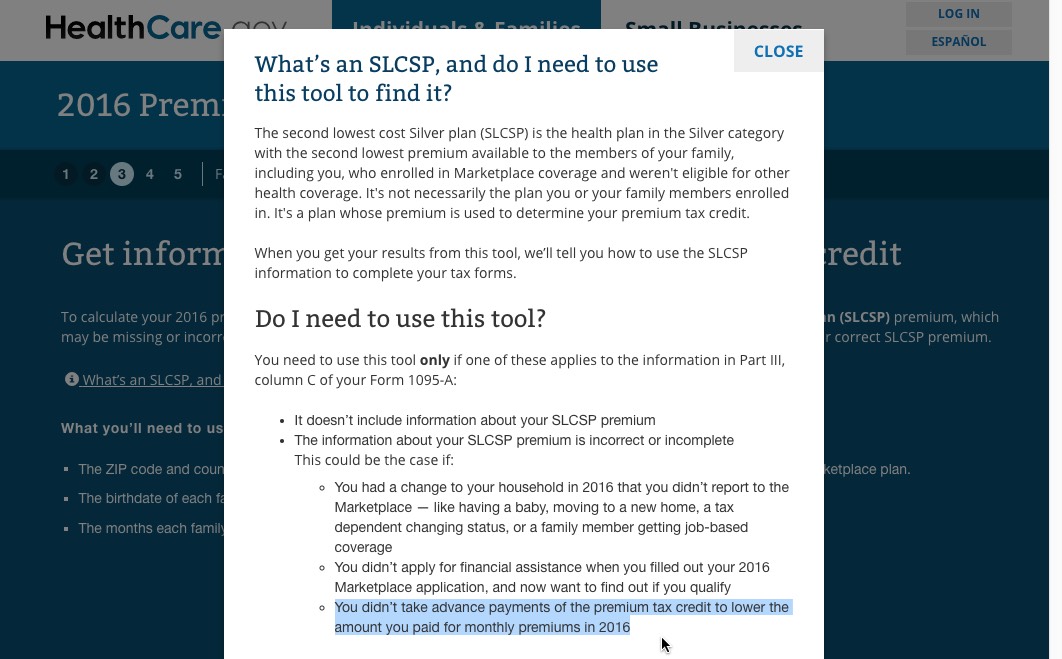 Then, we're supposed to plug that amount into form 8962 and use it to reconcile our taxes and see whether or not we actually qualified last year or not.

What'll happen when the IRS receives the amended forms and sees a discrepancy between the amounts in Form 8962 and  Column B of form 1095-A? I haven't the slightest clue.

The irony here is that we may end up not being eligible for that $34/month after all...which would make this whole headache pointless.

My concern really isn't so much about the $408 itself...it's about making sure we don't get in trouble or fined for doing something wrong.

Anyway, I'm sure this whole ugly incident will be used by ACA opponents as evidence of how screwed up and incompetent the public sector is, how clueless public employees are, etc etc. And God knows I'm not in a very cheery mood at the moment.

However, before you start raving about how incredibly efficient and responsive the private sector is by comparison, let me say just one word: COMCAST.