There's been a lot of talk, by myself and others, about just which populations would be screwed over by a full repeal of the Affordable Care Act. Analysts, reporters and pundits have sliced and diced the numbers every which way...by race, income level, geography and of course political leanings.

Of course, this gets awfully messy right out of the gate because some ACA provisions apply to everyone in the country, such as the cap removal on annual/lifetime coverage limits; the reassurance that you can't be denied coverage for having pre-existing conditions (which applies to those covered by employer insurance as well, I should note, since many of them may have to switch jobs or be without one at some point in their lives), and so on. Other benefits apply to subgroups which aren't talked about much, such as the Medicare fund being extended by years and the Medicare Part D "donut hole" being closed.

However, for the most part, analysis of this nature is referring to three very specific groups: The ~12.2 million ACA exchange enrollees, the ~15 million (or ~13 million...see below) ACA Medicaid expansion enrollees and the 760,000 enrolled in the Basic Health Programs in Minnesota and New York (I seem to be the only one who ever remembers to include these folks). Since around 10% of exchange enrollees never actually pay their first premium, the actual total is somewhere around 26.8 million people nationally (in my earlier County/Congressional District analysis, I reduced the total further still by removing those not receiving any tax credits at all or only nominal ones, bringing it down to around 24 million).

How about politically? How many of those at risk voted for Hillary Clinton (ie, to save the ACA) vs. how many voted for Donald Trump (ie, to repeal the ACA and rip away their own coverage, whether they "knew" that's what they were doing or not)?

Back in November, I posted a piece over at healthinsurance.org which tried to answer this question at the state level. It wasn't a particularly deep analysis, and my takeaway was that somewhere between 4-9 million Trump voters likely voted to shoot themselves in the foot, so to speak (or at least voted to leave themselves crippled for life if they did get shot). The rest, presumably, either voted for Hillary Clinton, a third party or in many cases didn't vote at all. However, this was obviously a pretty sloppy, back-of-the-envelope way of doing it.

Greg Sargent posted a good piece yesterday about Trump's sabotage efforts (active and/or passive) in which he noted:

But here yet another problem intrudes: Such a course of action could end up hurting a lot of Republican and Trump voters. By encouraging insurers to exit the marketplaces, it could leave many of the 12 million people who have obtained coverage on the individual markets with no remaining options — no way to get coverage or to access subsidies to cover that coverage. And Larry Levitt, a senior vice president at the Kaiser Family Foundation, tells me that this would hurt marketplaces in all regions of the country, which means deep red Trump territory, too, particularly because some of that includes rural areas where there are fewer insurers.

If Trump sabotages Obamacare, rural America will suffer the most

These are the patients most at risk.

...Of the nearly 1,000 counties with only one insurer in 2017 (which is probably true of 2018 as well), 87 percent voted for Trump. And the 16 counties in dark red are the counties in Tennessee without a single insurer. 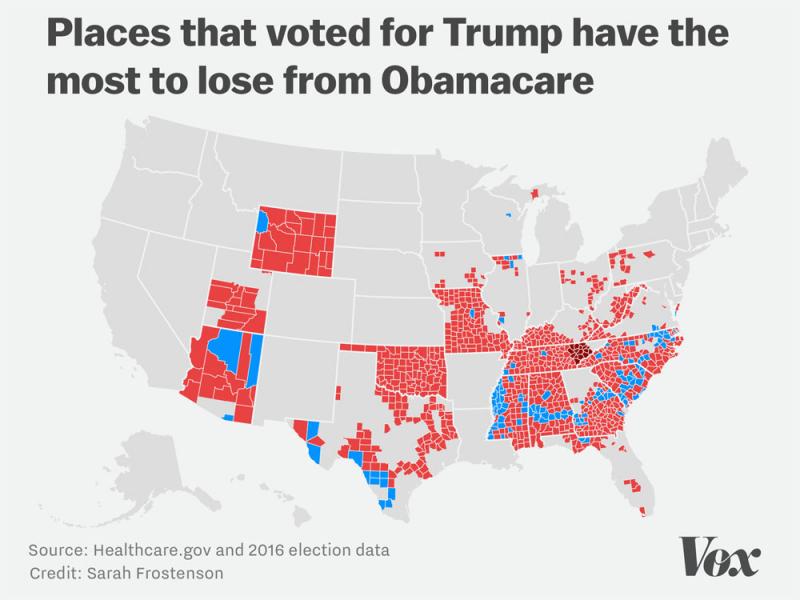 I decided to take this one step further by comparing the results of the 2016 Presidential election agains the number of ACA exchange enrollees, BHP enrollees (MN/NY only) and Medicaid expansion enrollees in every county to see how the numbers break out by who won each county.

And then...I placed it all in a Google Docs spreadsheet.

(Thanks to the folks at The Guardian and townhall.com, along with Tony McGovern for providing the county-level election data in downloadable format)

What I can say with a high level of confidence is this:

I admit to being a bit surprised by this, although there are three major factors which help account for it somewhat:

So, what does this all tell us?

Well, Republicans would probably claim this somehow "proves" that the ACA "only helps Clinton voters anyway!" since "her" number is higher...but that ignores the fact that regardless of how high the "Clinton county" number is, the fact remains that over ten million people living in counties which voted for Trump are at risk of losing coverage.

When you combine that with the fact that 87% of the counties with only a single exchange carrier (or none whatsoever) also voted for Trump, the threats of either outright repeal or sabotage (by scaring off carriers) is very real for a lot of his supporters as well.