I've stated many times over the past few weeks that between the GOP actively starting the legislative repeal process with preliminary votes, Trump actually taking office, his executive order within hours of doing so instructing the HHS Dept. to actively sabotage implementation of the ACA, and the last-minute yanking of TV advertising for the final few days of Open Enrollment that there's simply no way of making a solid prediction about what the final enrollment tally will end up being.

However, based on previous yearly patterns and spot-checks of HealthCare.Gov and the buzz from some of the state exchanges earlier today, I'm still gonna take a shot: I expect the final QHP selection tally to come in...pretty damned close to last year's 12.7 million, actually.

Officially, I'm giving it a range of anywhere between 12.4 - 13.0 million, with around 9.5 - 10.0 million of that coming via the federal exchange (which covers 39 states this year, including Kentucky) and the remaining 3 million or so being courtesy of the 12 remaining state-based exchanges.

Assuming the final number ends up within this range, it'll no doubt be spun as a massive FAIL by the GOP and Trump in particular, "proving" that the ACA is collapsing, bla bla bla.

And it's true that if enrollments end up being flat over 2016, that would come up about a million enrollees short of both "pre-Trump" HHS and my own projections, which were originally in the 13.8 million range.

HOWEVER, considering the massive uncertainty and deliberate sabotage campaign carried out by both the GOP in general and Trump specifically over the past month, I actually see holding even with 2016 as an amazing success. For comparison's sake, on November 9th, the day after the election, I was so despondent I was seriously concerned that things would flatline at no more than 2 million enrollees. These things are relative.

Besides, there's actually a "bonus" 263,000 enrollee cushion of sorts which I wasn't really expecting at all. I'm referring to the 263,000 additional Essential Health program enrollees in New York who signed up beyond the 380,000 who had done so at this point a year ago. I knew that EHP (actually called "Basic Health Program" by the ACA, or "BHP") enrollment would be a factor this year, of course, but I honestly wasn't expecting it to be that much higher than it was last January. Since everyone in BHP programs would otherwise be eligible for a QHP (Qualified Health Plan...the "normal" exchange policies), these really "should" be counted as part of the total. When you add the 643,000 BHPs from New York to the 62,000 or so in Minnesota, you get over 700,000 people who either should or shouldn't be added to the mix depending on your perspective.

For comparison, the all-time one-day exchange enrollment record was set back on 12/15, when 670,000 enrolled via HC.gov, which likely meant roughly 800,000 nationally.

Note that there will also be some late-breaking additions as well via "overtime" extension periods; Covered California and Connect for Health Colorado have announced 4-day and 3-day "In Line By Midnight" allowances, and HC.gov itself is supposedly calling back anyone who leaves their phone number with them by midnight Pacific to let them finish up their applications.

Finally, there could potentially be up to a whopping 125,000 Minnesota residents who get added to the total over the next 8 days, thanks to an unusual Special Enrollment Period they're offering primarily for those who don't qualify for standard ACA financial assistance.

And with that, I'm calling it a night.

Aside from the final actual HC.gov "snapshot" report (which may or may not be trustworthy), it's really California who I'm waiting on; with 12-13% of total enrollments, their final tally should be quite telling. 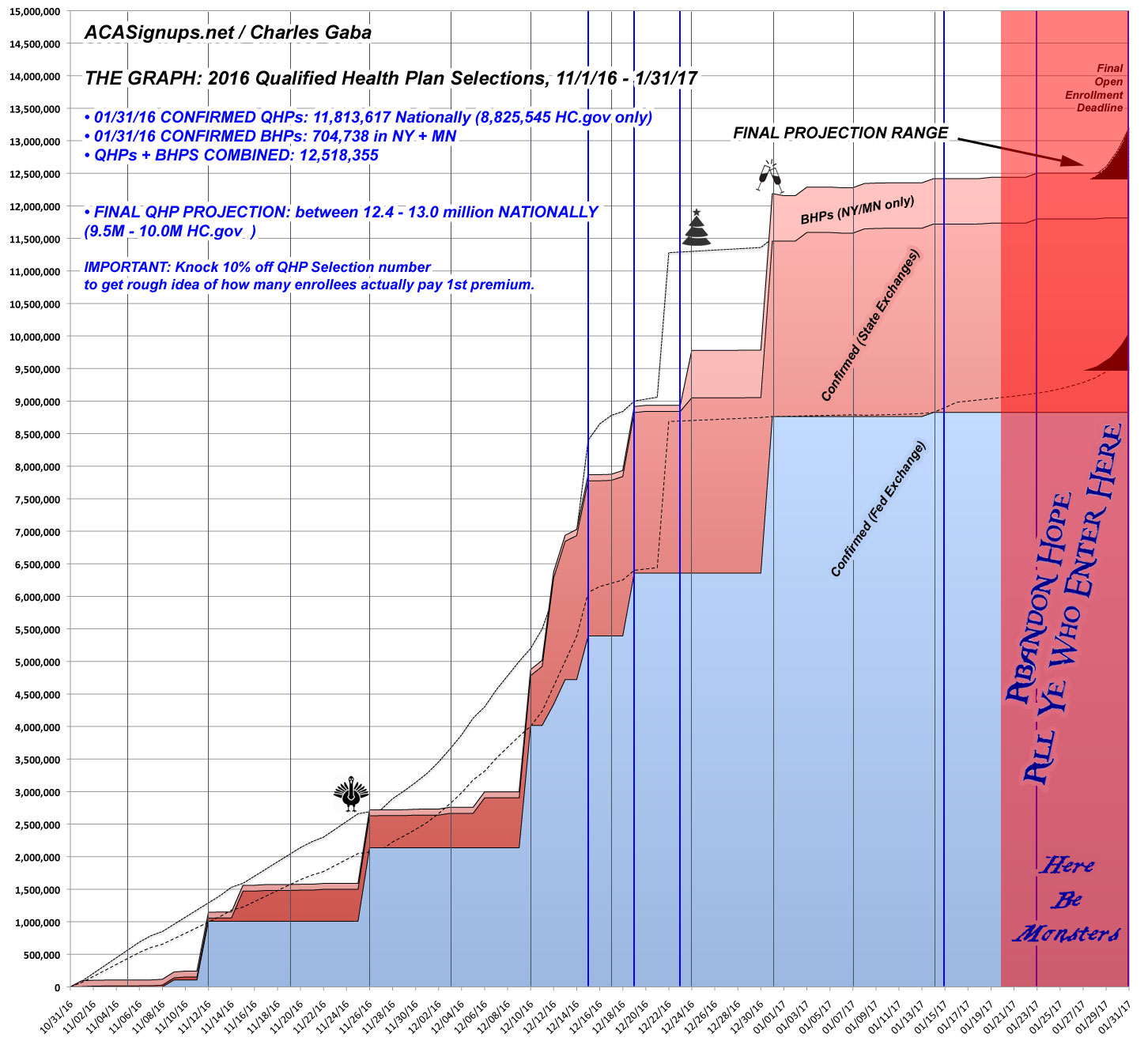