Arizona: Here's the ~524,000 residents who could lose coverage, by county (CORRECTED)

OK, this appears to be quickly turning into my next project thing. The methodology here is pretty much the same as the other states; the only major difference is that while I do know the total Medicaid enrollment for each county (as of December 2016), I don't have that broken out between traditional and expanded Medicaid. Fortunately, I have a hard state-wide number for that: Around 398,000, or roughly 20.8% of the state-wide total. I've therefore multiplied each county number by 20.8% to get a rough estimate of the ACA expansion tally for each.

Like Texas, I'm also no longer expecting Arizona to beat last year's Open Enrollment total by much. Assuming 209K QHP selections, there should be around 125K indy market enrollees and 399K Medicaid expansion enrollees who'll be in a world of hurt post-repeal, or roughly 524,000 altogether.

NOTE: The original version of these tables had some of the Medicaid expansion numbers in the wrong row...for some reason the original report from Arizona's AHCCCS website had La Paz county listed at the bottom instead of in alphabetical order with the rest of them. The tables below have been corrected. Sorry about the error, and thanks to Ed Darrell for the catch. 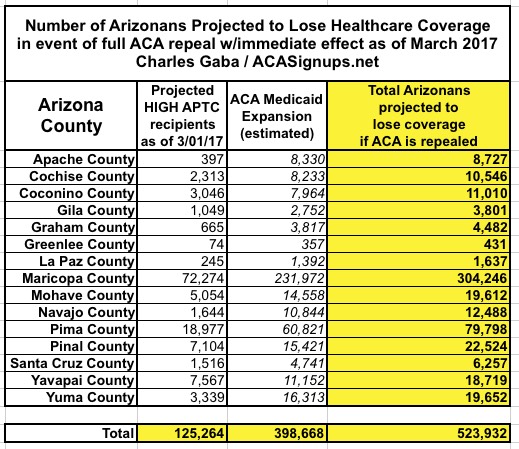