Through the extended deadline for January 1, 2017 coverage, Americans are demonstrating clear demand for quality, affordable coverage as 6.4 million consumers have signed up for Health Insurance Marketplace plans through HealthCare.gov, an increase of 400,000 plan selections compared to last year at this time.

One of the big issues I've been concerned about is the number of new enrollees. Here's the latest on that:

Total plan selections from November 1 through the extended deadline of December 19 include 2.05 million new consumers and 4.31 million returning consumers actively renewing their coverage. Consumers whose coverage will be automatically renewed for January 1 are not yet included in these totals.

A direct comparison with last year's "week 7" snapshot is a bit tricky, even though they both run through 12/19, because they had already added auto-renewals to the total, making an apples-to-apples comparison of the total enrollments tricky.

However, the new numbers can be directly compared. Last year it was 29% of 8.25M:

Nationally, I've confirmed a total of 2.36 million new enrollees to date, so they'd have to add either 2.24 million or 2.94 million more new enrollees between now and 1/31 to hit either HHS or my own projections respectively.

It's also worth noting that "400,000 more than this time last year" note in the press report. If there were 343,000 fewer new enrollees, but the total (not including auto-renewals) is 400,000 more overall, that must mean that around 743,000 more current enrollees actively re-enrolled than last year.

OK, so I blew it on the "overtime surge" substantially...but this is where the auto-renewals come into play. It's entirely possible that instead of, say, 2 million people being auto-renewed via HC.gov, it'll be 2.6 million...which would put things right back on track with my expectations regardless.

As I keep reiterating: Considering that immediately after the election I was deeply concerned that the numbers would flatline entirely, things aren't looking that bad even if the numbers fall short of the 13.8M target by both HHS and myself. However, I should also note one more important item: During today's conference call, CMS head Andy Slavitt reiterated that HHS still believes they're on track to hit their original target for OE4. The "hard" number they hope for is the same as mine (13.8 million), but their actual range was anywhere from 12.8 - 14.9 million, while my range was 13.5 - 14.0 million. 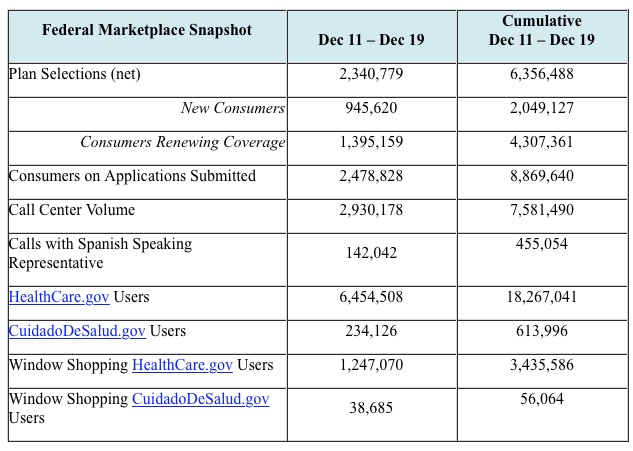