Bumping up my 12/15 estimate to 8.4 million (no change to final projection)

I made my original 2017 Open Enrollment Period projections before November 1st, and have only made a couple of modifications to The Graph since then...mainly to account for the fact that the 1st fell on a Tuesday this year instead of a Sunday. None of this changed my final projection of around 13.8 million QHP selections nationally by the end of OE4 on January 31, 2017.

In fact, the only time I seriously considered changing my final projection was November 9th, when I briefly speculated that Donald Trump's election could cause a disastrous drop-off in enrollments, flatlining at perhaps 1.5 million total. This particular concern was, fortunately, unfounded, as it turned out that not only did enrollments end up pacing my projections almost pefectly, they were actually running slightly ahead of my expectations overall.

Still, until yesterday, I stuck by my projection that around 7.7 million people would sign up for 2017 coverage by midnight last night, with perhaps 540,000 signing up at HC.gov and another 160K across the state exchanges. With the massive traffic building up at HC.gov and other exchanges, however, I noted that it looked like I had underestimated the volume for the official deadline for January coverage.

Sure enough, earlier this afternoon, President Obama confirmed that more than 670,000 people signed up via HC.gov yesterday alone...12% more than last year's record of 600K.

Between this and some other states chiming in (California and Colorado), I've now confirmed 7.6 million enrollees through yesterday...but that's still missing a whole mess of enrollment data from states like Idaho, New York and Vermont, which haven't reported any enrollment numbers yet. In addition, that doesn't include HC.gov enrollees from Sunday or Wednesday, which I estimate at 220K and 450K respectively.

In light of that, I'm adjusting my 12/15 estimates up as follows:

On the one hand, this is a whopping 700,000 enrollee increase from what I expected, which is great. On the other hand, this does not mean I'm bumping up my final, cumulative projection. I'm keeping that at 13.8 million for now, for a couple of reasons:

In other words, The Graph may end up having a more dramatic vertical spike this week...followed by a far less dramatic, nearly horizontal line for the second half of the period as current enrollees dry up and new additions drop off.

Hopefully I'm wrong about this and there'll be a pleasant upside surprise. In the meantime, my 1/31 projection still stands at 13.8 million. 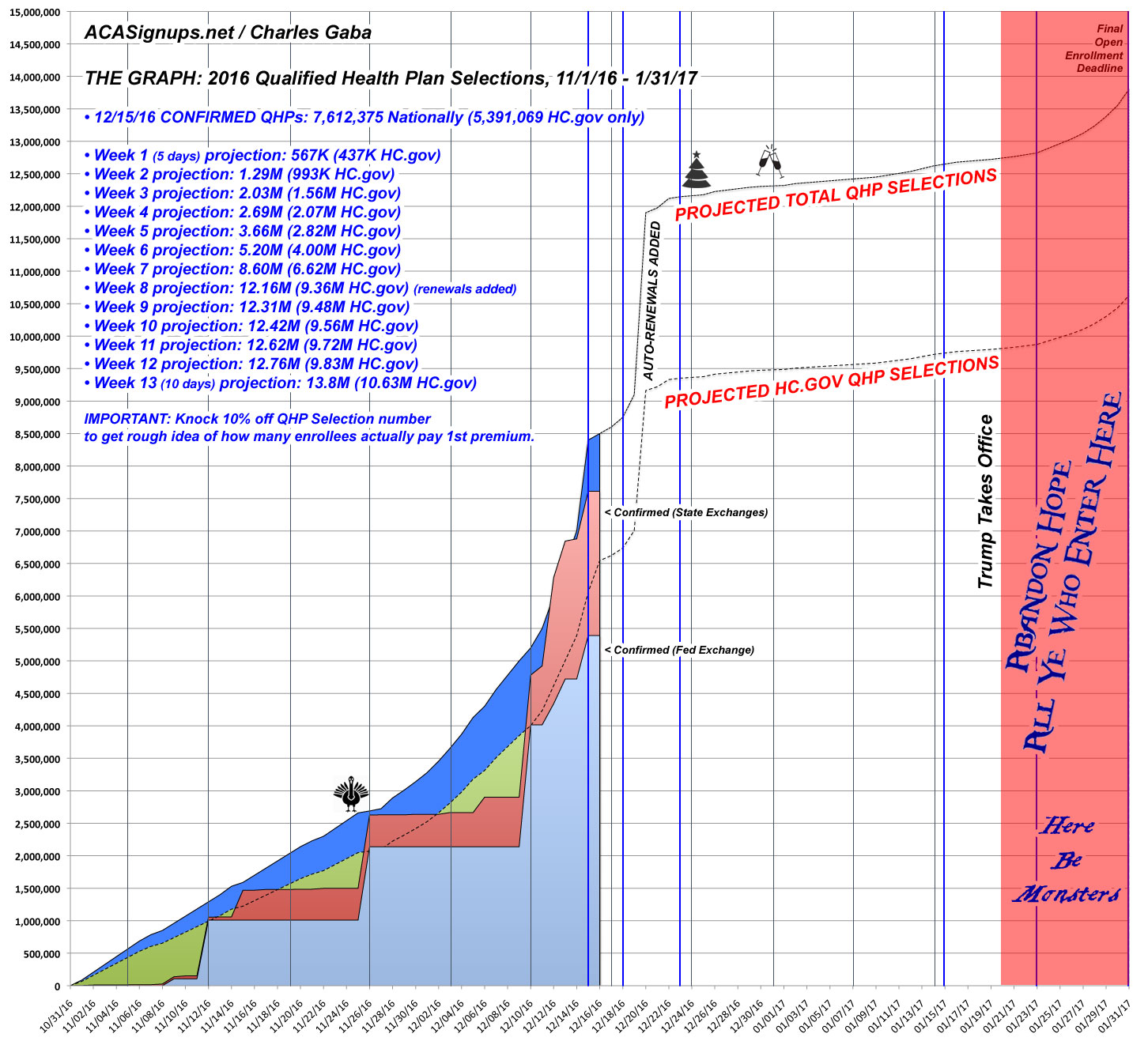