As anyone who's visited the site the past few days knows, I've spent countless hours digging up data to find out exactly how many people are enrolled in Medicaid/CHIP specifically due to the ACA's expansion provision. This is much more difficult than you'd think for a variety of reasons. For one thing, each state seems to have different methodology for how they track and report Medicaid enrollees (some weekly, some monthly, some quarterly, etc). For another, there's a wide variety of eligibility thresholds under pre-ACA Medicaid for different groups of residents in each state (pregnant women, infants, children, parents, etc), and since the funding mechanism varies depending on whether the enrollee qualifies for "normal" Medicaid or "ACA expansion" Medicaid, categorization can be tricky. Finally, due to the churn factor (people moving up and down the income scale as well as gaining or losing job-based or other forms of coverage), the numbers can jump around from month to month or even week to week.

My original recent estimate of how many people were enrolled in Medicaid specifically due to the ACA came to around 11.4 million people. This is the number I used in my exclusive piece over at healthinsurance.org a week or so ago.

Then, last night, thanks to a detailed report (with full source citations) from, ironically, an anti-ACA group called the Foundation for Government Accountability, I was able to update/correct the expansion data for quite a few states. While I was at it, I also took a second look at several additional states and found more recent hard data for those as well. In the end, the total number jumped by nearly a million people, to 12.3 million.

As you can imagine, this took tons of time to compile...and I was therefore actually a bit irritated this morning when the Kaiser Family Foundation released their own full analysis estimating exactly the same thing.

I'd have been thrilled that they took care of all of the heavy lifting for me...except that this report came out right after I finished doing the work myself. GAHHHH!! Furthermore, their national total comes in at just 10.7 million...1.6 million lower than I have.

However, upon reviewing their report, it turns out my own work wasn't done in vain after all...because the KFF's report, as impressive and detailed as it is, cuts off as of December 2015.

I plugged their numbers in next to mine for comparison. There are a few states where the differences are nominal rounding errors. For almost every state with a significant variance there's an obvious explanation: My number is based on more recent data than KFF's (this is especially true in California, Arizona and Indiana, as well as in Louisiana where Medicaid wasn't even expanded until this past summer).

There are still three entries with a significant discrepancy which I'm unclear about (DC, Maryland and Oregon), but in all three cases, KFF's numbers are actually higher than mine, and they add up to just 99,000 total, so I'm not gonna sweat it too much. 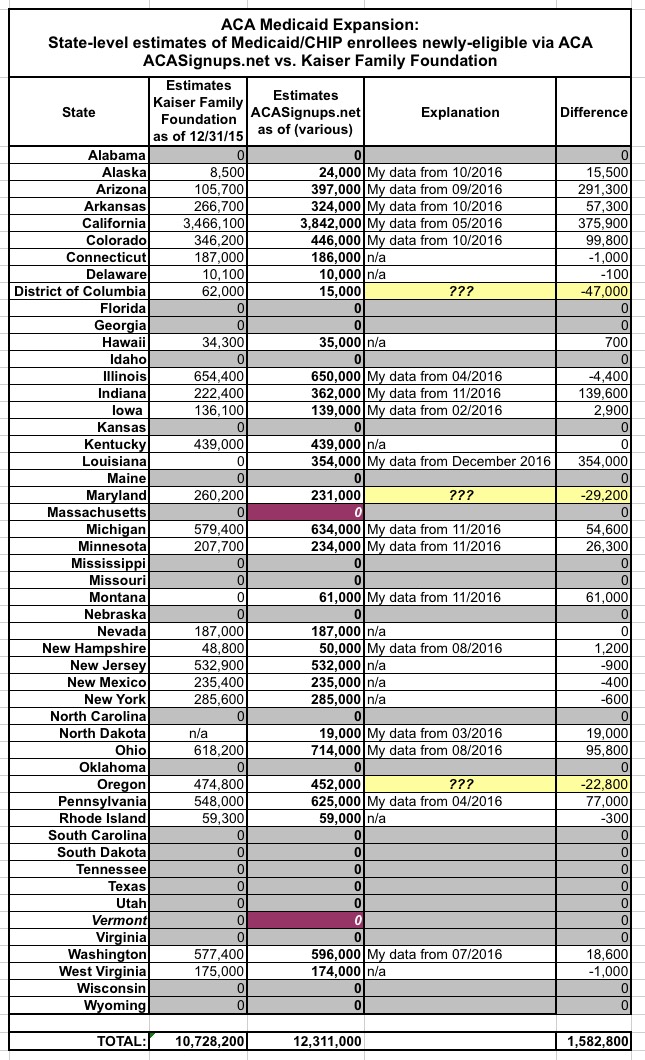