Last night I wrote a pretty extensive post about the Q1 2016 ACA Exchange Effectuated Enrollment Report, which breaks out the effectuated enrollment numbers as of the end of March. This is a follow-up post with some additional oddball items of interest. I'll probably add some things, so check back later for updates.

First up: While the national net attrition rate from the end of open enrollment through the end of March was around 12.6% (11.08 million vs. 12.68 million), the drop-off rate ranged widely state to state. Here's a table breaking this out. The net attrition is over 20% in 5 states and DC and between 15-20% in 5 more states, but is under 10% in 14 states. In fact, Rhode Island saw a net increase in effectuated enrollees from January through the end of March.

The other thing to note here is that there are some discrepancies between the official federal CMS report and the assorted state-based exchange reports. Some of these were as of April, not March, so it's not strictly an apples-to-apples comparison. The only one which really stands out to me is Colorado, although this isn't surprising given my repeated posts about how confusingly laid out their monthly enrollment reports are. 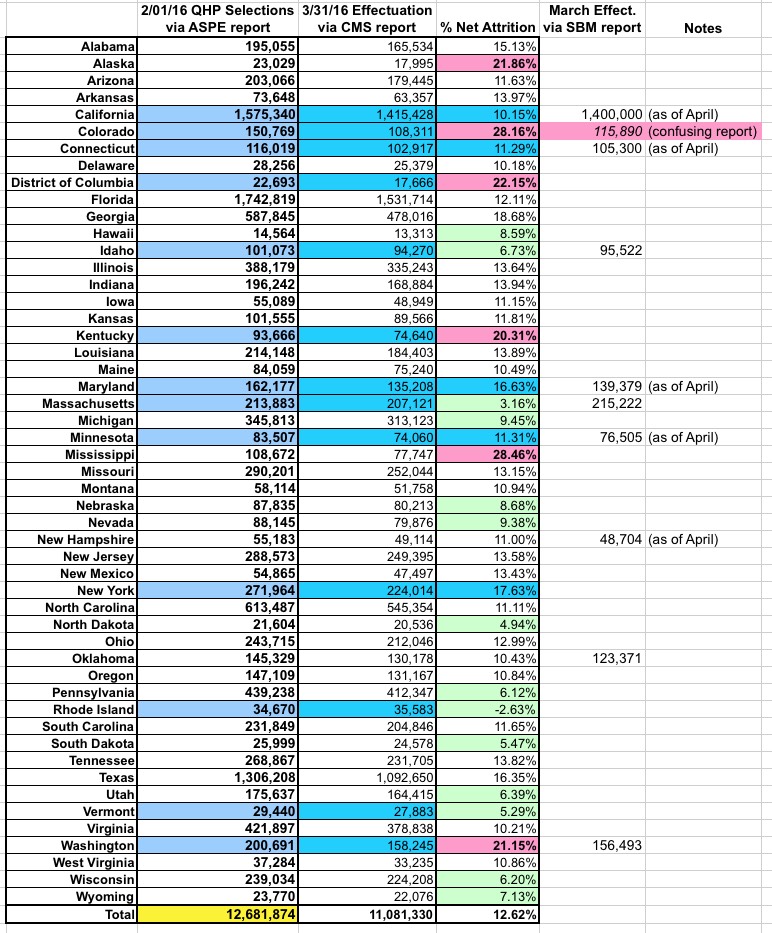 In operating the Marketplace, we are committed to providing access to coverage and financial assistance to individuals and families who are eligible while maintaining strong program integrity protections. Throughout 2014, 2015, and into 2016, the Marketplace has worked to resolve consumers’ data matching issues, including for those individuals whose citizenship, immigration status, or household income application information did not match information in our trusted data sources.For various timing and operational reasons, data matching actions were more concentrated in the first quarter during 2015 than they are likely to be this year. Thus, we do not expect a comparable reduction in data matching issues going forward. Nonetheless, with such a strong start, we do anticipate substantial progress for the year as a whole.

This is very impressive, actually. Remember that in 2015, about 112,000 people got kicked off their HC.gov plans for legal residency reasons, and another 240,000 or so had their APTC/CSR messed with due to income data screwups, so this speaks well of CMS's ability to improve/streamline the system.

The majority of these consumers (60 percent) received a special enrollment period for loss of minimum essential coverage. This means the consumer enrolled in Marketplace coverage after losing other health insurance, like coverage from their job. In addition, 18 percent of SEP plan selections were made by consumers who initially applied for coverage during open enrollment but needed to receive an eligibility determination from their state Medicaid agency before they could be determined eligible for Marketplace coverage and/or financial assistance. The tax season SEP for 2015 accounted for 9 percent of SEP plan selections. The tax SEP was not available for 2016. Finally, small numbers of consumers enrolled for other reasons, including birth, adoption, marriage, a move, or other circumstances. 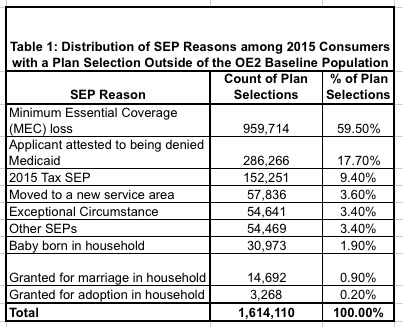 Only 152,000 people signed up via the 2015 #ACATaxTime SEP via HC.gov, plus an additional 62,000 via the state exchanges, for a total of around 214,000 nationally. This is one of the reasons why they decided not to offer a "tax filing season" SEP again this year; in spite of all the cries for it last year, a relatively small number of people took advantage of it.

Last year, SEPs made up appx. 15.2% of total annual QHP selections nationally (2.1M / 13.8M). If you subtract the #ACATaxTime, this drops to 14% (although some of those 214K would presumably have qualified for a different SEP anyway).

Assuming a similar ratio this year, there should be a similar 2.1 million off-season SEP QHP selections, for something along the lines of 14.75 million total for the year...or around the same 7,900/day SEP average. We'll see if this year's crackdown on SEP verification has any impact on that average, but won't know that for quite some time.