UnitedHealthcare drops off exchange in at least 5 states...but also admits they ARE making money in some places

Over the past week or so, UnitedHealthcare started making good on their threat last fall to drop out of the ACA exchanges in at least some of the 33 states that they offer individual market policies in. On April 8th they said they were pulling up stakes in Arkansas and Georgia (although they're keeping a small presence in Atlanta via their experimental "Harken Health" division). Then, last Friday, they said they were dropping off the Michigan exchange as well...and just today, Adam Cancryn noted that they're pulling the plug on Oklahoma, while Zachary Tracer says they're pulling out of Louisiana. Ugh.

HOWEVER, it appears that they aren't dropping out of other states. In Virginia, at least, it looks like they'll continue offering HMO plans, although they are dropping PPOs.

So...how about all the other states? Well, news will probably continue to leak out one or two states at a time, but Cancryn has provided a fascinating screen capture from what I presume is their Q4 2015 financial report: 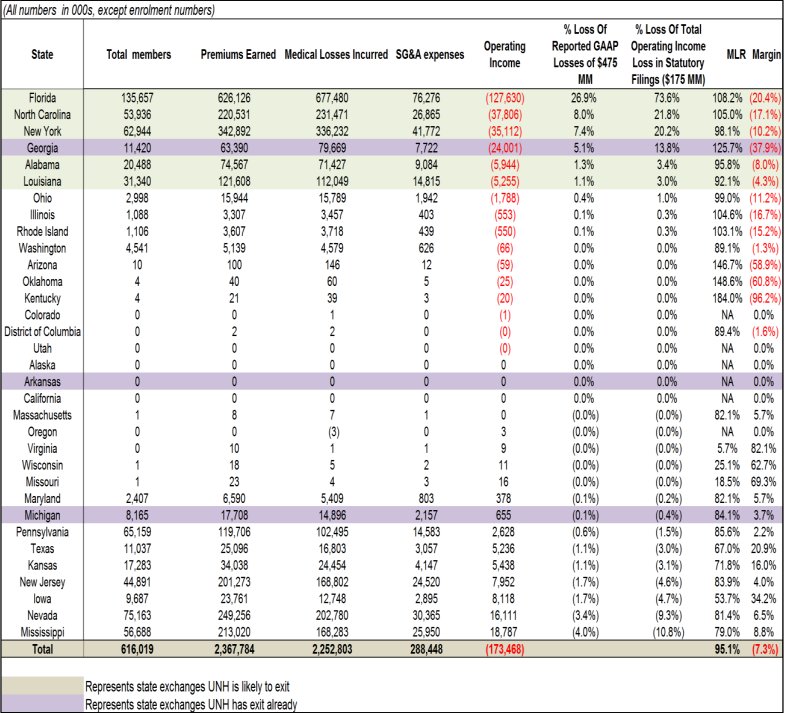 It's important to note that, according to Cancryn, this table includes all of UHC's individual enrollments in each state, both on and off the ACA exchanges. I'm not sure whether it includes grandfathered/transitional plans, but those should be a pretty small portion of the total even if it does.

As you can see, while UHC did lose about $173 million on the indy market last year, that was out of $2.4 billion in premiums, or roughly 7.3% in losses. While that's certainly not good, take a look at the states near the bottom; obviously UHC is capable of making a small-but-decent profit in at least some states. Florida made up nearly 3/4ths of their losses, so I'll be surprised if they stick around the Sunshine State.

So far, Michigan is the only state they're dropping where they're making money, although $655,000 is obviously pretty slim pickings for a behemoth like UnitedHealthcare. MOre interesting to me is Virginia...they appear to be staying in place next year even though, according ot this table, they don't have a single person enrolled in the state at the moment? Huh. Weird.

Also note that their total individual exchange enrollment number including off-exchange enrollees is around 616,000 nationally. If they decide to stay in all the other profitable states from last year (MS, NV, IA, NJ, KS, TX and PA), that's roughly 280,000 people who wouldn't have to shop around unless they wanted to next year.