Aside from that, the other interesting tidbit from Young's piece is that apparently I missed the release ofGallup's 2015 3rd Quarter Uninsured Rate survey last week. This is the first quarter since the ACA Exchanges and Medicaid Expansion launched 2 years ago that Gallup has found the uninsured rate to increase (if only slightly), from 11.4% to 11.6%. However, even this isn't too unexpected: Last year, the rate held steady at 13.4% for the 2nd and 3rd quarters, since things are pretty stable during the off-season. This year, with Medicaid expansion pertty much tapped out, the uninsured rate was almost certain to remain flat at best between Q2 and Q3; it inching back up could simply be noise in the survey's margin of error. It should be back on the decline again starting soon, as 2016 Open Enrollment ramps up.

Here's Gallup's fourth quarter uninsured rate report, in which the rate has continued to inch it's way back up to where it was in the first quarter of 2015:

Despite the uninsured rate not changing much over the course of 2015, it has been lower in each quarter compared with the same quarter in 2014.

Results for the fourth quarter are based on nearly 43,000 interviews with U.S. adults aged 18 and older from Oct. 1-Dec. 30, 2015, conducted as part of the Gallup-Healthways Well-Being Index. Gallup and Healthways ask 500 U.S. adults each day whether they have health insurance, which, on an aggregated basis, allows for precise and ongoing measurement of the percentage of Americans with and without health insurance.

As I've noted in the past, it bothers me that Gallup never runs the Y-axis all the way down to 0%, so I've whipped up my own more detailed version of their graph. In addition, I've added lines showing the two critical starting points: Q1 2010 (when the ACA was actually signed into law) and Q3 2013 (when people were able to actually start enrolling in ACA exchange policies as well as ACA Medicaid expansion in most states). Finally, I've added color-coded sections showing the roughly 8 million uninsured U.S. adults who can't possibly be counted against the ACA's impact on the uninsured rate: Undocumented immigrants (who don't legally qualify for either exchange policies or Medicaid) and those caught in the Medicaid Gap (in states which have refused to expand the program). You can click the image below for a high-resolution version.

While the uptick is greater than I expected and is thus a bit disappointing, it's also not entirely unexpected. Adults over 18 make up around 77% of the population, or around 246 million people out of 320 million total. That means that every 246K = appx. one tenth of a percentage point uptick or downtick on Gallup's survey results.

The increase from Q2 to Q4 (11.4% to 11.9%) is 0.5 percentage points. The June (Q2) effectuated exchange report was 9.95 million people. By September 30 (Q3) this was down to 9.3 million, or 650,000 fewer people enrolled. That's 0.26 percentage points already accounted for, or over half of the change. On the federal exchange, 6.05 million people renewed their exchange policies, which suggests roughly 8.4 million renewals nationally...or 900K fewer than the total effectuated in Q3. That's up to another 0.36 percentage points, although this should be more than made up for by the 2.6 million and counting (more, when you include the state-based exchanges) new folks who have/are signing up for 2016. 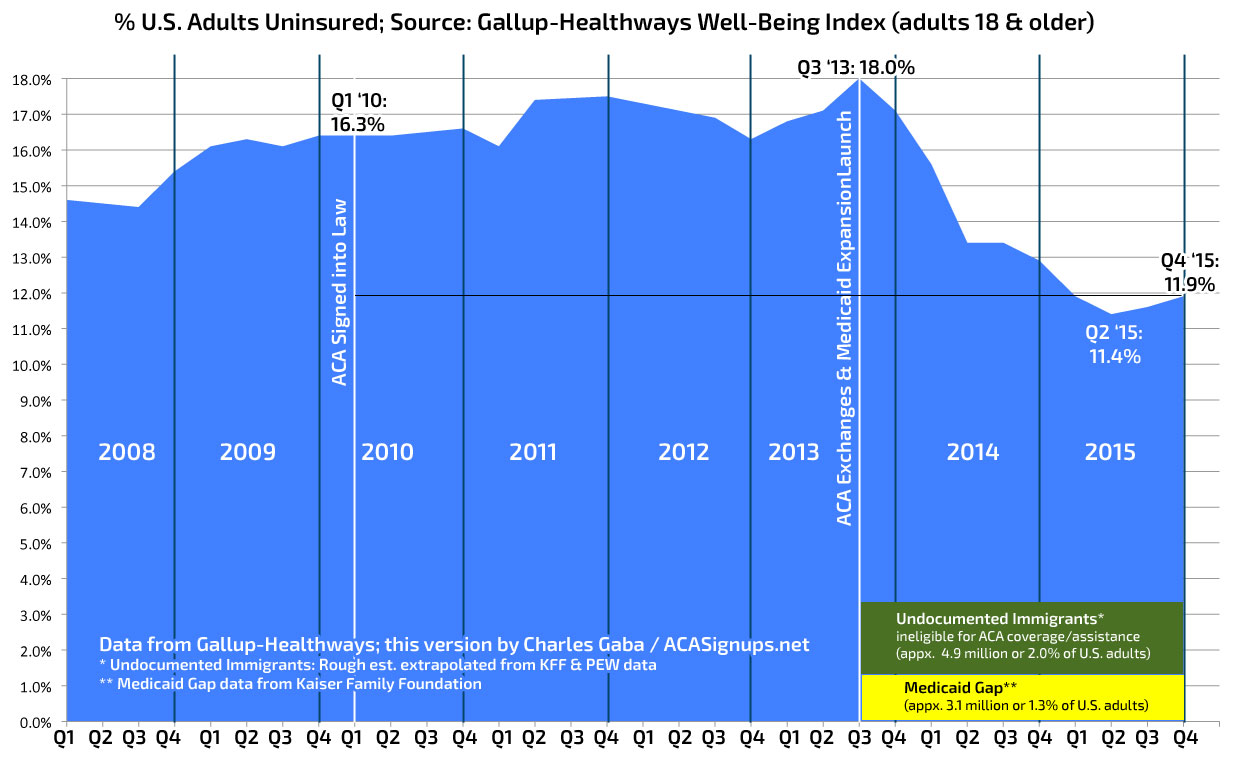