There's a lot to absorb here, and I missed the conference call from around an hour ago, so there may be additional details/key points which I'm unaware of, but the report itself is very detailed (in fact, they've broken it into two separate reports this time; the first one covers the overall national data, the second breaks down the individual state-level data).

In addition, there are two major changes from the first ASPE report from last year. Last time around, the report only covered one month (11/15/14 - 12/15/14), and didn't include auto-renewals on the federal exchange, which meant that it only included around 4 million QHP selections even though the actual number was up to around 8.8 million as the end of 2014.

I was expecting something similar this year--in fact, I figured that only November (11/1/15 - 11/30/15) would be included, which would have made the report somewhat useless for my purposes (aside from perhaps some partial data form the "radio silent" states of New York, Kentucky, Vermont and DC).

HOWEVER, it turns out I was dead wrong about all of this, and I couldn't be happier: Not only does this year's ASPE report include auto-renewals for every state, it runs all the way through December 26th, 2015 (in fact, the footnotes say that California and Massachusetts data runs through 12/27 and 12/28 respectively, which is kind of odd but whatever).

In addition, as always, the ASPE report is chock full of all sorts of additional data geek demographic goodies: Breakdowns by metal level, age bracket, income level, gender, ethnicity, renewals vs. new additions and so on.

Next, add the additional QHP selections after 12/26 in the state-based exchanges:

...and you're up to at least 11.37 million as of January 2nd. In fact, it's a bit higher yet, since there's still a week's worth of numbers missing from California, Connecticut, DC, Idaho, Kentucky, Massachusetts, New York and Vermont. I'm assuming around 20K or so, which would bring the grand total up to roughly 11.39 million.

Again, these numbers are gonna bounce around slightly, but it looks like I'm within 0.5% of the exact number.

UPDATE: HOLD EVERYTHING! Covered California just released their own press release which states:

SACRAMENTO, Calif. — With less than one month remaining in this year’s open-enrollment period, Covered California announced Thursday that more than 238,000 new consumers had enrolled in health care coverage by the end of Jan. 2. Covered California also announced that more than 124,000 new and renewing consumers had enrolled in the new optional family dental coverage.

Setting aside the dental plan news (which is nice as well), let's look at the 238K new enrollee figure as of Jan. 2nd.

(NOTE: This entry is pretty long with the graph, so I'm moving to a new entry for further updates...) 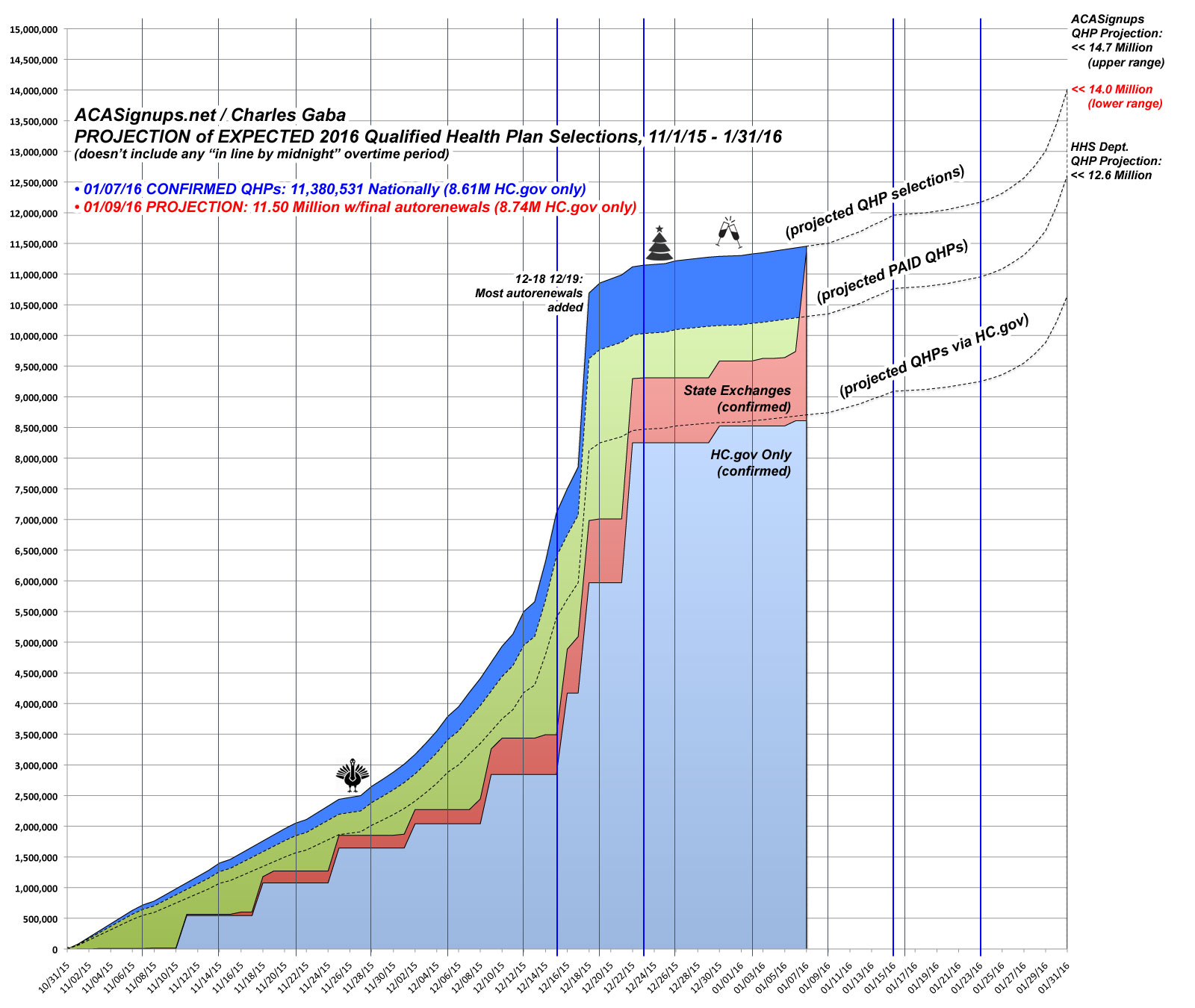