How effective will the 2016 Mandate Penalty be in getting Young Invincibles to enroll?

Ever since I posted my latest article on the growing Individual Mandate Penalty (again, it's up to $695 per person or 2.5% of household income this year), I've heard the same response from many ACA detractors (and even some supporters): Even with the increase in the mandate penalty (technically, it's called the "Individual Shared Responsibility Payment"), it's still too small for it to make sense economically for most people when compared to the cost of enrolling in a compliant policy.

Even with tax credits, the reasoning goes, even the least-expensive Bronze plan (or Catastrophic for those who qualify) is still more expensive than the mandate tax. Of course, if you pay the penalty, then you're still stuck with absolutely no insurance whatsoever, whereas if you enroll in even a basic Bronze plan, you're at least covered for major medical expenses (ie, the type which can wipe out even a $10K deductible*), while also receiving many basic medical treatments like checkups, immunizations and cancer screenings at no charge or for a nominal co-pay. However, it's true that in some cases, the up front dollars paid are indeed higher for the policy than the fee.

*UPDATE: D'oh! Thanks to Esther Ferington for reminding me that the actual worst-case scenario might not be nearly as bad as this, due to the ACA's limit on total out of pocket maximums. For instance, a single, non-smoking 26-year old in Detroit making $20K/year would have an out-of-pocket maximum of $6,450 no matter how much they rack up in medical expenses. On the one hand, that'd still be a disaster on $20K/year. On the other hand, it's also still a lot better than $10K...not to mention the $100K+ which the expenses might rack up without any insurance at all).

Of course, much of this is subjective and, due to the very nature of insurance itself, inherently relies on unknowns. After all, if you knew for certain that you'll never need any medical treatment whatsoever over the next 12 months, paying anything for health insurance would technically be a waste of money. On the other hand, if you know for certain that you're going to rack up a million dollars in medical expenses next year, pretty much any ACA-compliant policy would still be money well spent. Unfortunately, no one knows one or the other for certain, which is kind of the point of insurance in the first place.

I cannot stress this point enough: I am in no way advocating that anyone NOT enroll. I'm basically just playing Devil's Advocate here as a thinking exercise.

The question is how many and what demographic of people this dilemma is true for. There are so many variables of age, income level (ie, tax credit eligibility), household size/dependents, carriers/markets/cities/states and so on that it would take forever to test out every single potential combination to see which ones are "better off" taking a pass and paying the penalty.

However, data nerd that I am, I decided to take on the challenge...with several assumptions and rules to keep me from going crazy trying to cover all the bases. Here's what I did:

OK, with all that in mind, here's what I came up with.

The first thing I needed to do was to figure out what the actual shared responsibility tax penalty would be. If I understand how it works, you first have to subtract the minimum federal tax filing income threshold from their total income. The threshold was $10,150 as of 2014. This may have gone up a bit since then, but that's what I have to work with:

OK, so that's what we're measuring against. Now comes the tedious part: Plugging in all 3 ages at all 5 income levels for all 10 cities...that's 150 different cases in all. Here's the results; bear in mind that these prices are only available through the exchanges for the first few income brackets due to the Advance Premium Tax Credits which chop the prices down: 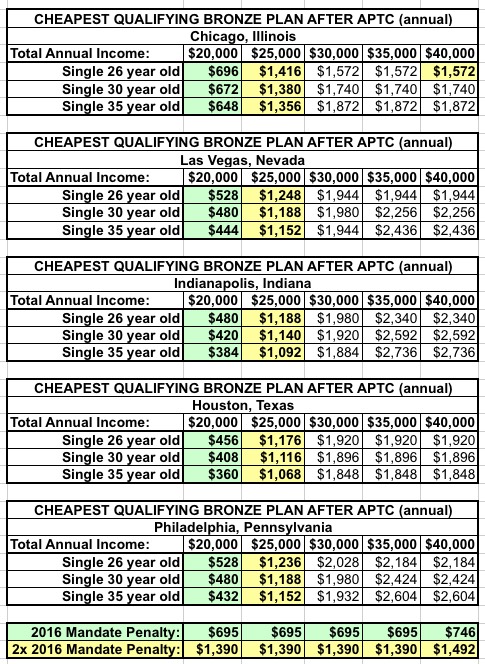 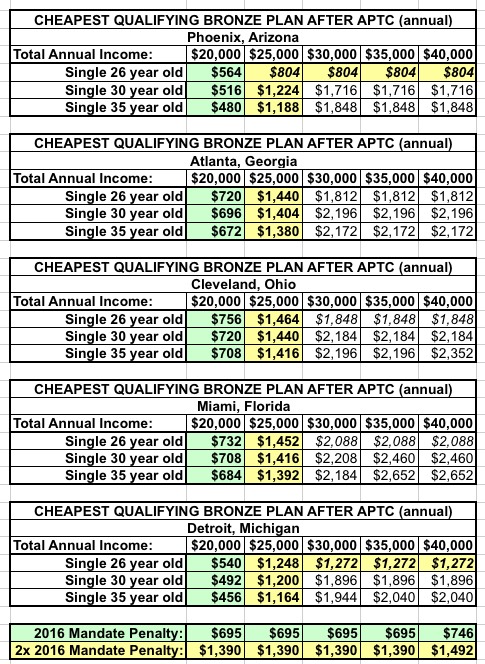 As you can see, enrolling in an exchange-based healthcare policy is an absolute no-brainer at the $20,000 level, and still makes sense at $25,000.

It's above $25K, or over 210% of the FPL, where the decision becomes more difficult, because aside from a few exceptions (Catastrophic plans in Phoenix and Detroit), even the least-expensive plan starts costing more than twice as much as the penalty at $30K and higher.

For everyone else, healthinsurance.org has a very handy calculator which lets you easily figure out just what your tax penalty will be if you don't get covered (along with a lot more details on exceptions, penalty maximums and so forth).

So, what's the solution here? Well, obviously it would be best if the cost of coverage were to come down further...either through switching to a Single Payer healthcare system (a guy can dream) or, failing that, by beefing up the Advance Premium Tax Credits and Cost Sharing Reductions (in both amount and the income range they're available at); in other words, strengthening The Carrot.

HOWEVER, if you want to go at it from The Stick side, it looks to me like jacking up the penalty. Going with $800 or 3.5% of income, for instance, would do the trick for just about all of the Young Adult population:

Once again, I'm not saying that individuals at $30K and up should pay the fee, I'm just noting that this is a legitimate issue which might cause 2016 enrollments to suffer as a result.

UPDATE: Thanks to Rick Gundlach for reminding me of another way of looking at the issue: For the upper 3 income levels ($30K, $35K and $40K), they'd still have to pay around $700 regardless of whether they enroll or not. That means that, in practical terms, a policy running, say, $2,000 for the year is actually only costing the enrollee around $1,300, since the first $700 or so would have to be paid out one way or the other anyway.