Hey, Heritage Foundation: How do you like them apples?

Remember a few weeks ago when the right-wing Heritage Foundation published a study which tried to claim that only 3% of the net increase in Americans with healthcare coverage due to the first year of the Affordable Care Act exchanges was via private individual policies, with a crazy-high 97% of it allegedly coming from Medicaid expansion?

Remember how the only basis for this argument was an extremely shaky claim that employer-sponsored insurance had supposedly dropped by 4.5 million people from 2013 to 2014 (which supposedly cancelled out all but 260,000 of the private policy gains)??

Finally, remember how I completely obliterated this argument with a mountain of solid, reliable evidence proving pretty damned conclusively that their "3%" claim was nonsense, and that the actual ratio--while still weighted heavily in Medicaid's favor--was more like 2:1, or 70/30 at most?

Well, thanks to the Florida Dept. of Insurance's 2015 Health Insurance Market Report, I think I can safely rub some more salt in that wound.

Before I post their key findings, I should clarify that yes, of course Florida is only one state...but it's the 3rd largest one, with 6.2% of the national population, and pretty representative demographically and economically, I should think. In addition, bear in mind that Florida has a Republican governor, Republican-held state House and Republican-held state Senate, so while the FL administration is not above censoring information to fit their ideological agenda, they sure as hell aren't likely to willingly publish anything which runs counter to the powers that be at the Heritage Foundation.

With that in mind, here's what the FL Health Insurance Advisory Board found:

As illustrated above and shown in Table 1 below, total enrollment in Florida’s commercial health insurance markets increased in 2014 by 18.91% or 593,325 covered lives. Total covered lives at year end 2014 were as follows:

In other words, the only way that the Heritage Foundation's "net loss of 4.5 millions ESI in 2014" claim could possibly be true is if:

Somehow I find that a bit of a stretch.

Here's the chart they're referring to from the same page, breaking out each segment by both percentage and raw number changes: 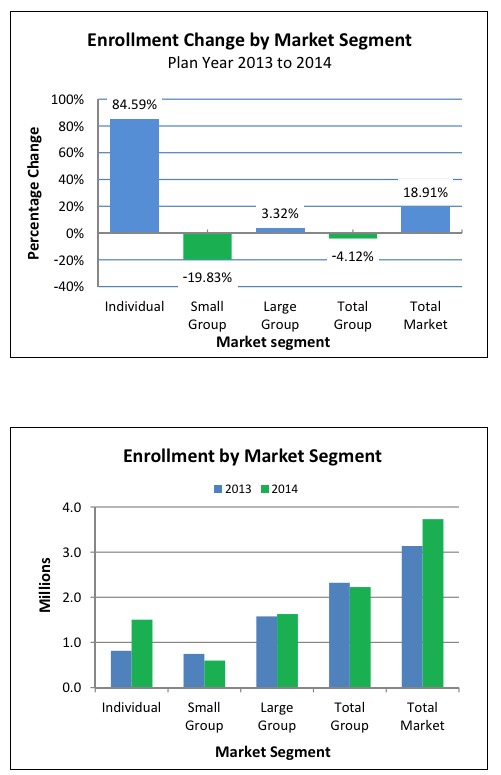 Now, the Heritage Foundation could try to argue that they were referring only to exchange-based enrollments. This makes no sense at all, since the only effective distinction between the two is that off-exchange enrollees don't qualify for federal tax credits (even if their income slips below the 400% FPL level), but what the hell; let's take a look at that as well: 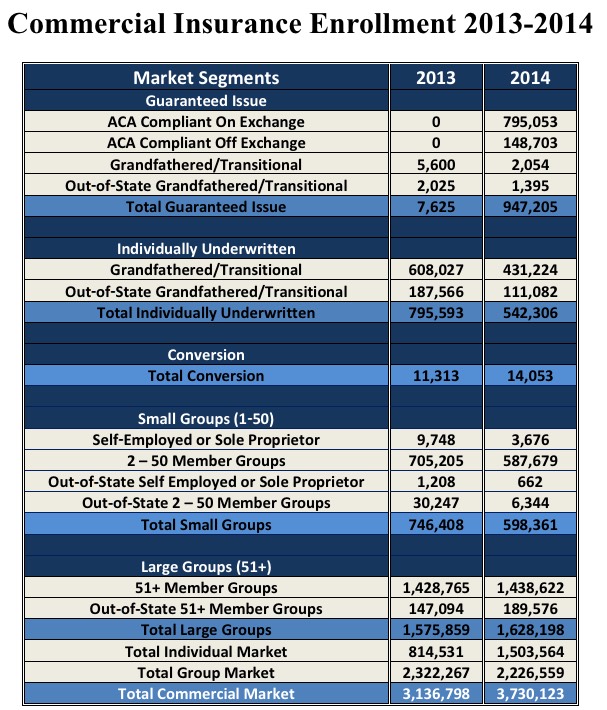 Meanwhile, the off-exchange total, which includes Grandfathered, Transitional and some ACA-compliant policies went from 795,593 in 2013 to 694,458 in 2014. Yes, the off-exchange tally did drop, but only by about 100,000 people...outpaced nearly 8x by the addition of the exchange-based enrollees.

In short, Heritage Foundation, go jerk yourself a soda.