Friday, there were two major developments: First, the state insurance superintendent released their approved rate hikes for the various companies:

How does this impact the overall statewide weighted rate increases for 2016? Well, unfortunately, the article doesn't provide any additional market share/enrollment data (although it does include a corrected number for BCBS), but this does still fill in some of the picture.

With certain assumptions (NM Health Connections averaging 10.5%...splitting the difference between 4-17%; Presbyterian averaging 4.5%), here's what the new table looks like: 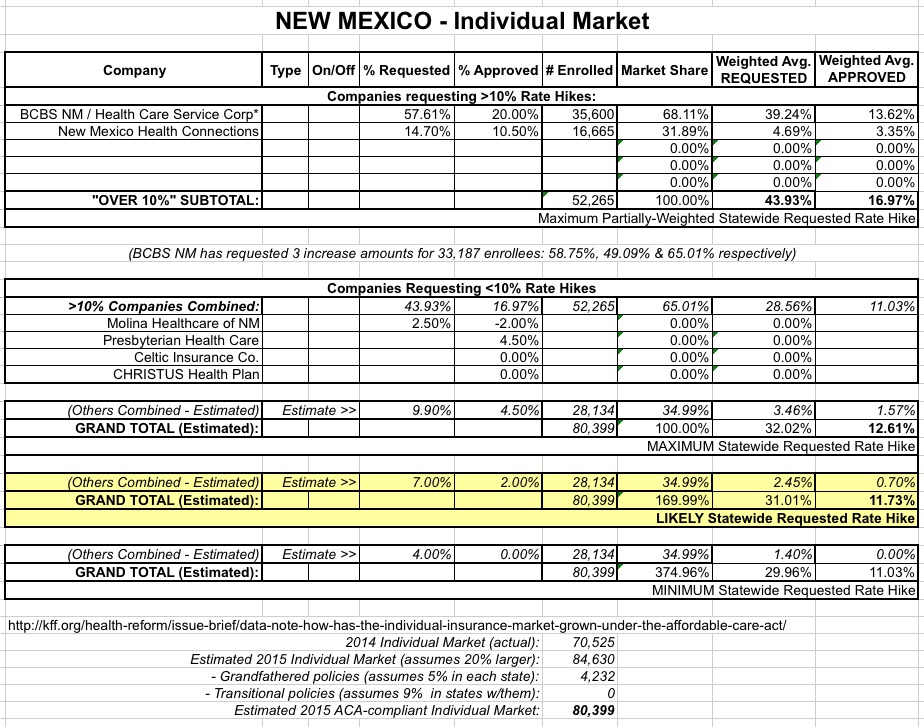 So, the good news is that instead of an overall 30% hike, the approved weighted average has plummeted to a mere 11.7% or so (possibly as high as 12.6%). This isn't fantastic, of course, but it's right in line with the 10-12% pre-ACA annual rate hikes which were the norm, as well as the national average for 2016 across 20 other states so far.

Blue Cross Blue Shield of New Mexico President Kurt Shipley strongly disagreed with Franchini’s comments, saying his organization provided more detailed information than it had for previous rate requests. He said it even submitted an additional proposal that included insurance offerings that would be comparable to rates Franchini had approved for the other insurance companies.

...Blue Cross now has 30 days to request a hearing on Franchini’s decision. [BCBSNM President Kurt] Shipley said he hasn’t decided whether to do so, but told Franchini he remains open to further discussions.

“I remain optimistic that we can still get something in place,” Shipley said.

If no agreement is reached, Shipley said Blue Cross likely would not offer any plans through the health exchange for 2016. Open enrollment begins on Nov. 1.

Franchini said New Mexico has a competitive insurance market, and Blue Cross customers could shop around if that were to happen.

Well, now. There you have it. Blue Cross wants a 50%+ hike; the state regulators are sticking with 20% max, so BCBSNM is threatening to pull out of the ACA exchange if they don't get their hike.

I'm not an insurance regulator nor an actuary, so I obviously have no idea whether BCBS is being reasonable here or not, but that's not really the point. The point is that the ACA exchanges have many regulatory tools at their disposal when it comes to the private carriers operating on them: They can require that participating companies include certain minimum coverage, that they include provider networks, and so on. What they can't do, however, is legally require that a particular insurance company participate in the first place.

The benefit of participating on the exchanges is that it offers tens of thousands of potential new customers, a one-stop shop with its own marketing/outreach program taken care of by other entities and especially the fact that a good 85% of those new customers will have a large chunk of their premiums paid for by the government anyway while the insurer gets the full payment amount.

However, if the company decides that all of these enticements aren't worth the hassle or downside, there's nothing that the HHS Dept. or the state insurance commissioner can do to force them into doing so.

The closest parallel I can think of here is in Minnesota, where PreferredOne, which seriously underpriced their individual policies on MNsure, decided to drop off the exchange completely this year, forcing thousands of people to switch to one of their competitors (or pay a massively jacked-up full price amount to stick with PreferredOne off of the exchange). In that case, PreferredOne didn't even bother to stick around long enough to see whether their new rates would be approved or not; they just bailed completely.

So, how will this play out this fall? Well, assuming that the regulators call BCBSNM's bluff and sticks with the 20% cap, and assuming BCBS does indeed pull off of Healthcare.Gov, that means that about 35,000 New Mexicans will have to do what they really should be doing anyway this November: Shopping around for a different carrier.

The larger problem is that it's always theoretically possible that in some states which have only 1 or 2 companies, they could all decide to bail on the ACA exchange, which would leave the HHS Dept. in an awfully awkward position (and, if it's a state-based exchange, they'd be in big trouble as well assuming that their funding comes from fees imposed based on enrollee policies).

In the meantime, officially, New Mexico's approved weighted average rate increase has just dropped from 30% to around 12%.