Before I get to the actual visualization itself, some important disclaimers/caveats:

As a result of all of the above (not to mention population growth), it's entirely possible--in fact, quite likely--that some of the estimates shown are off by a bit. Employer-Sponsored Insurance, Medicare and Medicaid, in particular, could be too high or low by up to 1-2 million people each given the large numbers involved.

With all of that out of the way, here's my best crack at trying to portray the current healthcare coverage status of every single person in the United States of America as of October 2013 (just prior to the launch of the ACA exchanges and Medicaid expansion program) and July 2015. Comments welcome. I've added some additional notes below the graphic. 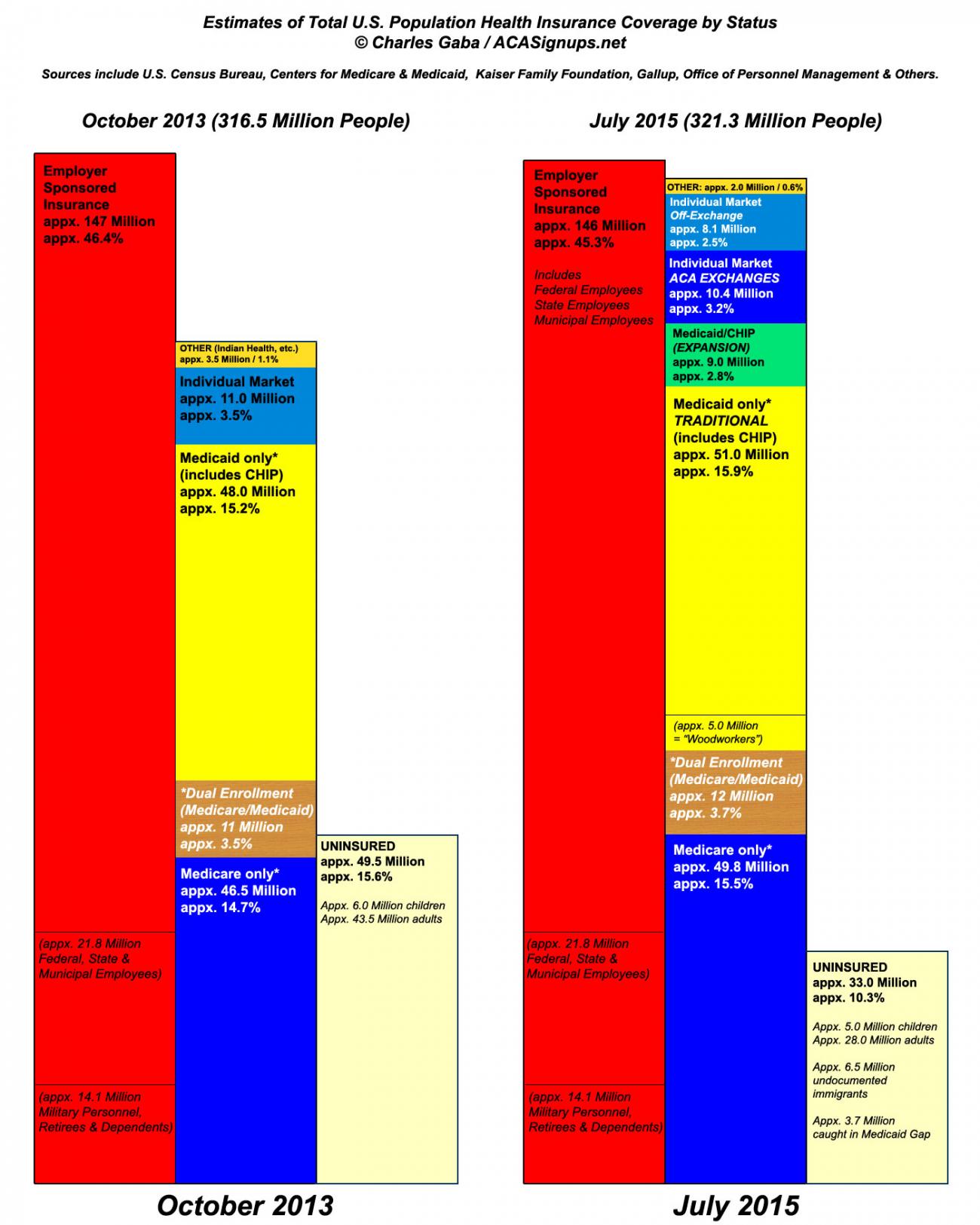 UPDATE: Julie Rovner correctly points out that while the ESI section includes both federal, state & municipal employees (including the roughly 1.5 million active duty military personnel), it's unclear as to whether it includes the 12.5 million or so non-active duty folks via Tricare. After doing some poking around, I have to assume that they are included there if only because, frankly, there's nowhere else they could be listed. As I noted above, there's a lot of rounding, averaging, etc. flying around, in both the 2013 and 2015 charts, but slicing 14 million people out of any section other than ESI would make the estimates dramatically different from every one of the consensus numbers. So, until I hear better evidence otherwise, I'll assume that they're included as well and will "semi-break out" TriCare/VA folks the way I did with Medicaid "woodworkers".

UPDATE x2: OK, the VA/TriCare question aside, this is about the best vote of confidence I could ask for from Larry Levitt of the Kaiser Family Foundation:

@charles_gaba @jrovner I'd say it's roughly consistent with what we know so far.

UPDATE x3: I was deliberately avoiding using Pie Charts for this because a) it makes population growth difficult to visualize and b) it's harder to visually compare pie wedges than rectangles, but what the hell (and no, the colors don't match the above; this is a quickie using Excel's default settings): 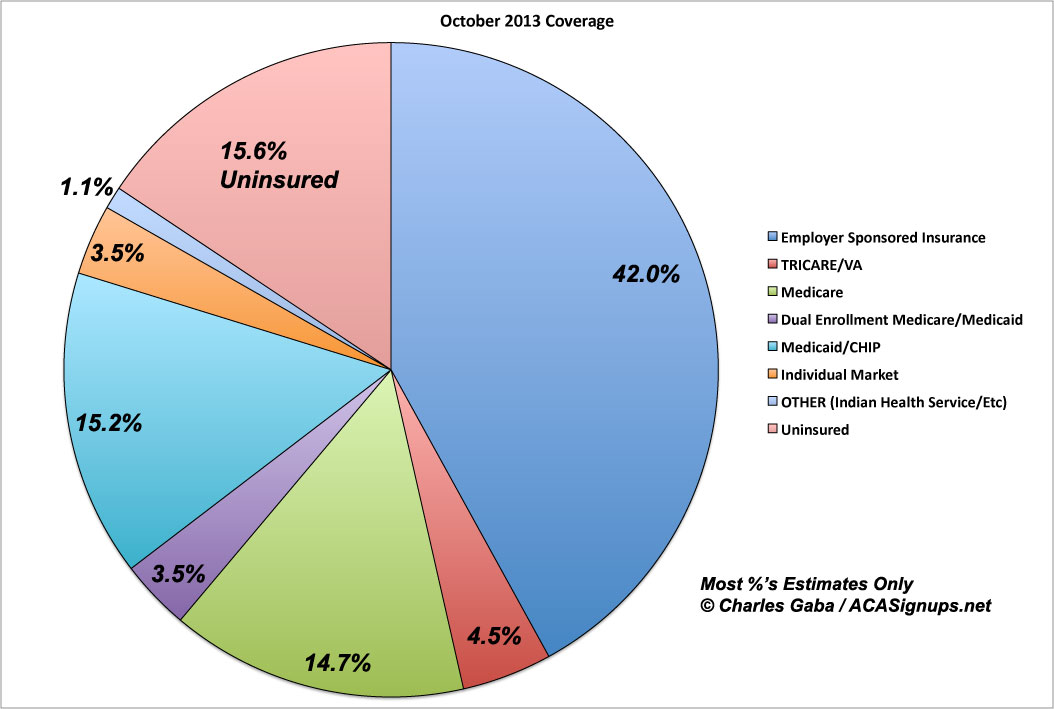 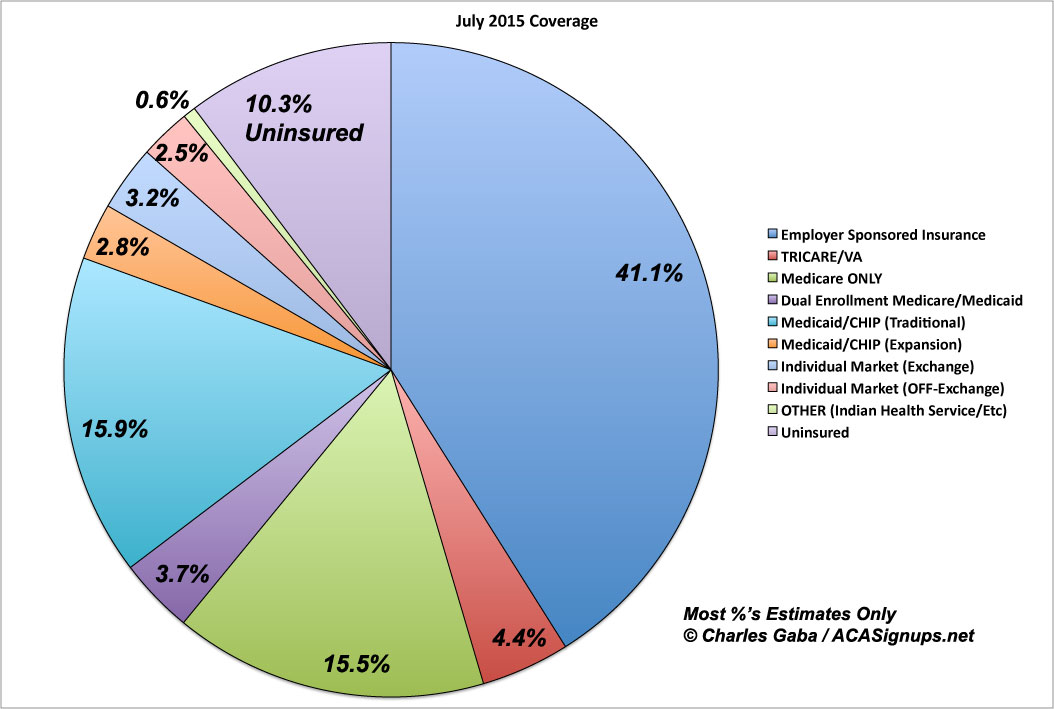 UPDATE x4: Lynn Blewett of SHADAC points out that the 2014 National Health Interview Survey shows an increase in total private insurance enrollment, and is pretty sure this includes an increase in Employer-Sponsored Insurance. However, Levitt seems to indicate that this is more on the individual market side, not ESI specifically.

As I noted above, most of these numbers are still pretty fuzzy, so it's entirely possible that either one is correct (or, for that matter, that both are...it's possible that ESI has gone up slightly and the individual market has also gone up, just a couple million fewer than shown above). However, neither of them (nor any of the several other respected healthcare journalists/analysts who've commented so far) have indicated that I'm significantly off on anything above, which suggests that the overall picture is reasonably accurate. I'm hoping to do an updated/tweaked version of these graphs every quarter or so; the next one will likely be just prior to the 2016 Open Enrollment Period which starts on November 1st.

UPDATE x5: Per a suggestion by someone in a different thread, I've modified the "bar" chart by moving the Uninsured section over to its own, separate column. This makes the chart even more readable by shortening it, while also making it easier to compare the key change: The reduction in total Uninsured.