Also hot off the presses, Nick Budnick at the Oregonian reports that OR is the first state to approve final 2016 individual market policy rates. Since Oregon is not allowing "transitional" policies for 2016 (they gave a 1 year extension vs. the 2-3 that some states allowed), this should apply to all individual policies state-wide (as well as small group policies):

More than 220,000 Oregonians who buy their own health insurance will face higher premiums next year, and Portlanders could see some of the biggest hikes in the country.

State regulators have announced the 2016 rates for people who aren't covered by their employers or government programs.

The overall news is not good for consumers. Some insurers had asked the state to approve rates similar to last year's lowest. But many insurers lost money from unexpectedly high costs, so officials proposed raising many rates in preliminary decisions two weeks ago. The final decisions issued Wednesday resulted in a slightly better range of options for consumer.

I went directly to the Oregon Insurance Division website and found the actual table which lists all of the individual companies, the requested rate changes and the final decisions, along with a sample premium listing for each (ie, a single 40-year old Silver plan for someone living in Portland) to give an idea of what a typical price change might mean: 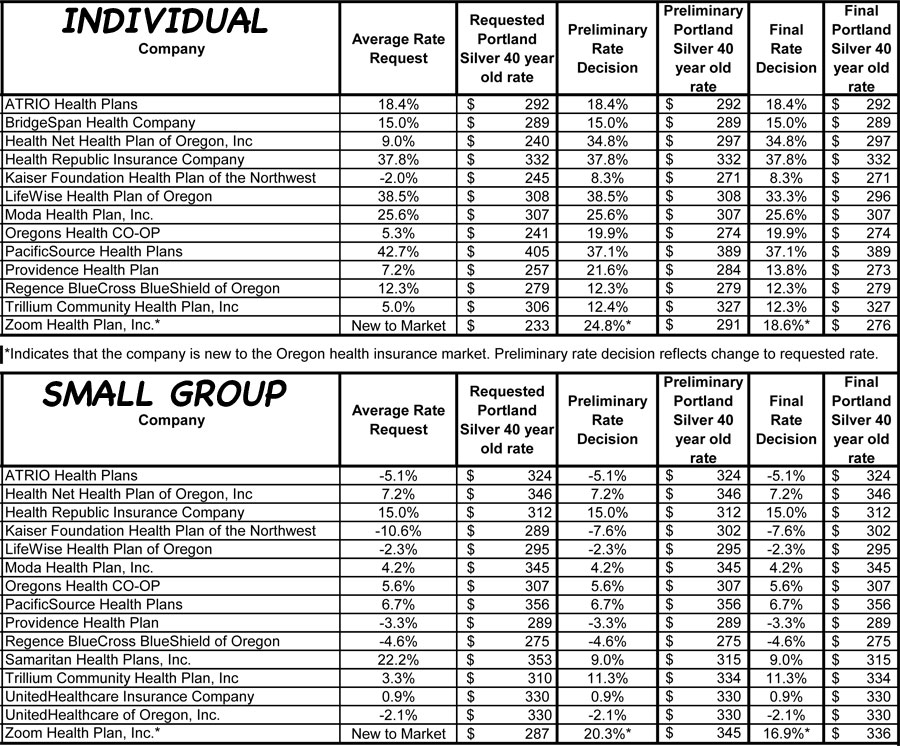 OK, so the average increases range anywhere from 8.3% to 37.8% on the individual market, and anywhere from a 7.6% reduction to an increase of 16.9% in the small group market.

What does this mean for the people actually enrolled in these policies, well, I compiled a rough market share breakdown from a few weeks ago which should be reasonably accurate (Budnick gives the total individual market enrollment as over 220K, so presumably another 10,000 or so have enrolled since then, but I presume the relative market share hasn't shifted around much: 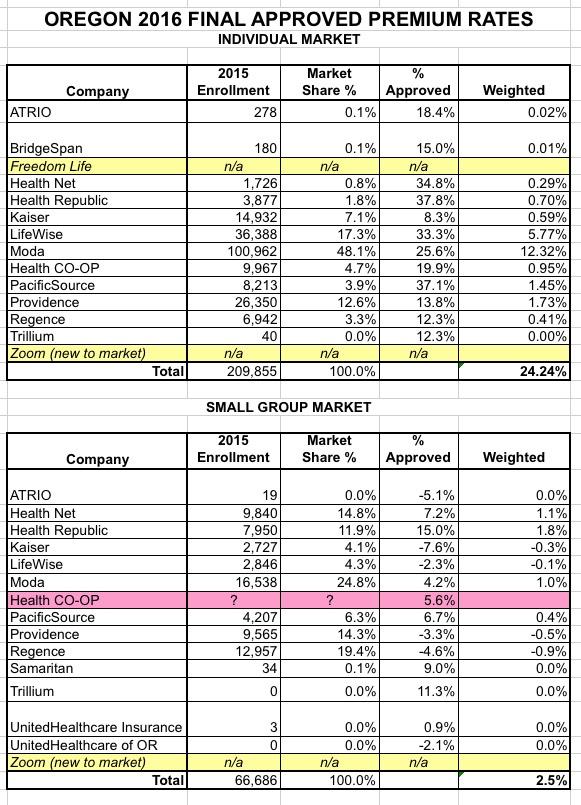 Ugh. Things are looking pretty darned good on the small group market side (I don't know how many enrollees the CO-OP has, but unless it's a dramatically large number their 5.6% increase shouldn't move the needle much), but it's admittedly unpleasant on the individual market side: An overall average weighted increase of about 24%.

The silver lining here (pun intended) is that, as noted in the Oregonian article, even with these hikes, the rates are still pretty much in line with other states, and shopping around could result in a decrease for some people. For instance, using the 40-year old Portland example above, someone enrolled in a Silver plan via PacificSource (currently paying $284/month this year and looking at a 37% hike to $389/month) could switch to a Kaiser plan and only pay $271/month...a decrease of 4.5%, or $13/month!

Of course, that also depends on the different networks, deductibles, co-pays and so on between the two, but that's why it's vitally important that everyone shop around instead of blindly autorenewing. I cannot stress that enough.