When the Republican Party replaced the director of the Congressional Budget Office, Doug Elmendorf, with "one of theirs" (Keith Hall, who previously worked as an economist for George W. Bush), there was understandably plenty of concern (or hope, depending on your politics) that CBO projections would suddenly become radically different from what they had been under a "Democratic" CBO director, especially when it comes to politicized issues such as the Affordable Care Act.

Well, according to a brand-new report from the CBO released just now, that's actually a fair assessment...but not in quite the way that Republicans probably expected:

Summary Over the past several years, a number of proposals have been advanced for repealing the Affordable Care Act (ACA), which became law in March 2010. In this report, the Congressional Budget Office and the staff of the Joint Committee on Taxation (JCT) analyze the main budgetary and economic consequences that would arise from repealing that law.

To conduct the analysis, CBO and JCT first considered the effects of the ACA’s repeal on health insurance coverage and on the federal budget over the next 10 years, holding gross domestic product (GDP) and other macroeconomic variables (such as interest rates) constant— assumptions that underlie most cost estimates used in the Congressional budget process. The agencies then examined the macroeconomic effects of repealing the ACA and estimated the consequences of the resulting feedback for the federal budget over the next decade (involving changes in tax revenue, for example, that stem from changes in GDP). Finally, CBO and JCT considered the budgetary and economic effects of repealing the ACA for the period beyond 2025.

As has been the practice for past analyses of the ACA, CBO and JCT estimated the budgetary implications of a repeal in two broad categories: the effects of repealing the act’s provisions concerning insurance coverage—including subsidies provided through the insurance exchanges, added costs for Medicaid, revenues from certain penalties and taxes, and related effects—and the effects of repealing other provisions of the act, which would mostly be related to Medicare spending and tax revenues. For the purposes of this analysis, CBO and JCT assumed that a repeal would take effect on January 1, 2016, and would not change federal law retroactively. As discussed below, all of the resulting estimates are subject to substantial uncertainty.

What Would Be the Major Effects of Repealing the ACA?

CBO and JCT estimate that repealing the ACA would have several major effects, relative to the projections under current law:

In other words, they're fairly certain that repealing the ACA would directly increase the deficit by $353 billion over the next 10 years, but that this would be partially offset by indirect deficit reductions. Even so, when the dust settles, the bottom line is that the federal deficit would see an increase of around $137 billion due specifically to ACA repeal.

Keep both of the numbers above in mind when you start seeing "dueling press releases" from Democratic and Republican outlets. The Dems will obviously be pushing the "$353 billion deficit increase!!" part (ignoring the macroeconomic effect which would, theoretically, reduce the damage) while the Republicans will be pushing the "repeal would save $216 billion!" line, completely ignoring the greater deficit increase.

I debated whether to use the $353 billion or $137 billion number in the headline, since both are technically true in different ways. I had a lengthy Twitter discussion with Loren Adler of the Committee for a Responsible Federal Budget (and Ken Kelly, who's awesome but whose profession I'm still a bit unclear on), who straightened me out and explained that the CBO traditionally would list only the $353 billion figure in the main report. The corresponding $216 billion reduction projection might be listed as a separate, supplementary document...and from our discussion, it sure sounds like that number is a lot less bankable than the deficit increase would be. In the end, I decided to include both numbers. I complain a lot about other outlets oversimplifying or posting screaming headlines out of context, so I want to be careful not to do that here.

But wait, there's more! That's just for the next decade; after that the (budgetary) "benefits" would taper off while the negatives of repeal would continue to grow:

To illustrate what "so large" could mean, here's the actual table. Check out the 2025 column and notice the trend: Even including the "macroeconimic feedback" which the GOP is insisting be included in the main report these days, notice that the increase in the deficit would be expected to grow to nearly $100 billion per year.

Naturally, the GOP will focus on the first 5 years, when full repeal is projected to reduce the deficit by $108 billion...but would ignore the next 5, when the deficit would increase by more than double that, with no end in sight after that: 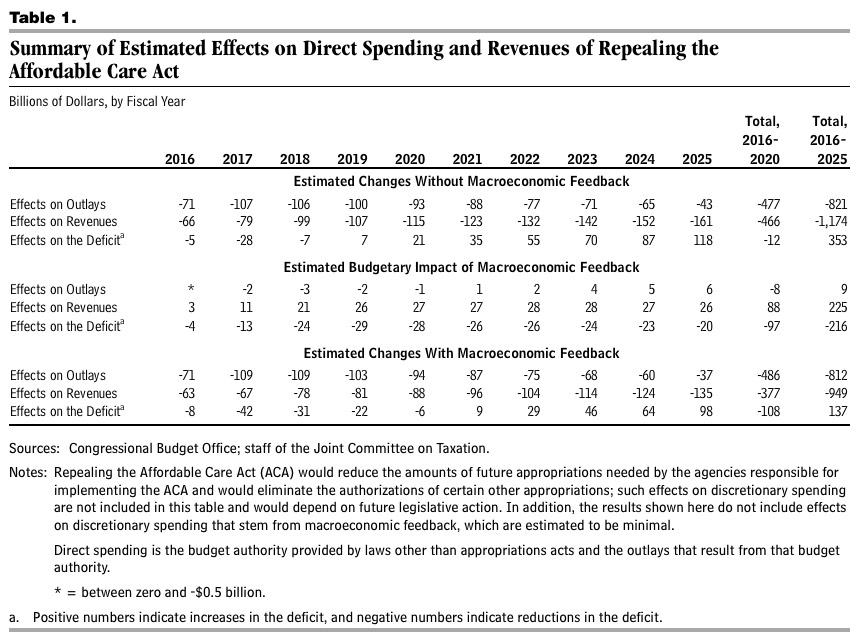 OK, so that's the bean counter side. What about the human impact?

Once again, the GOP will no doubt issue press releases saying "See?? The CBO says that repealing Obamacare will mean 8 million more people with employer-sponsored insurance!!", completely ignoring the 30-32 million reduction in those covered on the individual market and/or Medicaid roles.

Anyway, read the whole thing. Not a pretty picture for those wishing to repeal the law, though obviously they'll cherry-pick the parts which look good to them.

UPDATE: Annnnnnnd regular as clockwork; thanks to Jeffrey Young of the Huffington Post for the heads up; here's the Republican Budget Committee's official statement in response to the CBO report:

WASHINGTON D.C. – The non-partisan Congressional Budget Office (CBO) today found that repealing the President’s health care law would boost the nation’s economy by increasing labor supply and grow the country’s Gross Domestic Product (GDP) to a notable degree. In a response to a request by the Senate Budget Committee and Chairman Mike Enzi (R-WY) on the effect the President’s health law has on the economy, CBO determined that repealing the law will increase economic growth.

“CBO has determined what many in Congress have known all along,” said Chairman Enzi. “This law acts as an anchor on our economy by dragging down employment and reducing labor force participation. As a result, the deficit reduction that the Democrats promised when it was enacted is substantially unclear. While CBO’s report notes that the deficit impact of repealing the law is highly uncertain, and could even reduce the deficit, it does show that repealing this law will boost nationwide employment and grow the economy.”

Hah. Of course. No mention of the increased deficit projections or the massive increase in the uninsured.

Reminds me a lot of one of those misleading movie review blurbs used by the studios...you know:

A negative review of the 1997 film Hoodlum, for instance, praised actor Lawrence Fishburne as "fierce, magnetic, irresistible." The studio then slapped the word "Irresistible" on all their ads.