One is about Marco "$57,000 per enrollee!!" Rubio's attempt at an Obamacare replacement plan. Yawn.

One is about Ted "Joseph McCarthy Lookalike/Soundalike" Cruz being "hypocritical" by enrolling the ACA himself (this is mildly amusing, but people comply with laws they personally oppose all the time, so I'm not really making hay out of this one).

The third is a right-wing attack on the HHS Dept's claim of 14.1 million "newly enrolled" due to the ACA since October 2013; I haven't done an analysis of this piece yet.

And then there's this nonsense from Katie Pavlich, "Townhall editor and Fox News contributor", so you know this is gonna be loads of fun:

“More than 16 million Americans have gained health coverage thanks to the Affordable Care Act. #BetterWithObamacare,” another tweet said.

First, it’s important to analyze this White House white lie. While more Americans do in fact have health insurance in the wake of ObamaCare, the administration fails to point out that citizens are required by law to do so or pay a fine.

Um...in what way is this a "white lie"? The statement doesn't say anything about what the motivation was for all of those people. Did some of them only enroll due to the individual mandate? Sure, but the bulk of them were people who wanted healthcare coverage but couldn't afford it previously. Or do you really think that the people standing in around-the-block lines last March were doing that just to avoid what was just a $95 per person fee, not payable for another year?

The irony here is that Pavlich would have had a better case if she went after the "more than 16 million" figure instead of the "but they were all forced to!!" silliness.

This wasn’t the case in decades past. Times — and the law — have changed. The government criminalized the decision not to purchase healthcare, and the IRS has been tapped with enforcing the requirement. More people have health insurance because they’ve been forced into the system, not because they want insurance or because they have easier access.

Um..."criminalized" suggests that you'll go to jail or something if you don't comply with the law. There's no jail time here...and, for that matter, it's my understanding that the only thing the IRS can legally do (barring any unrelated tax fraud) is to withhold your tax refund, not actually penalize you for failing to pay the tax. I could be wrong about that, but you certainly aren't gonna get thrown in jail.

Also: Wrong. Only 19% of those who did enroll in private policies did so primarily due to the tax penalty (another 21% said they might or might not have without the penalty):

The other 60%, however, enrolled because of reasons like, say, having pre-existing conditions which meant they couldn't get enrolled prior to the law, not being able to afford it until now and so forth (admittedly, 34-36% did list the tax penalty/legal requirement as being among the reasons they enrolled): 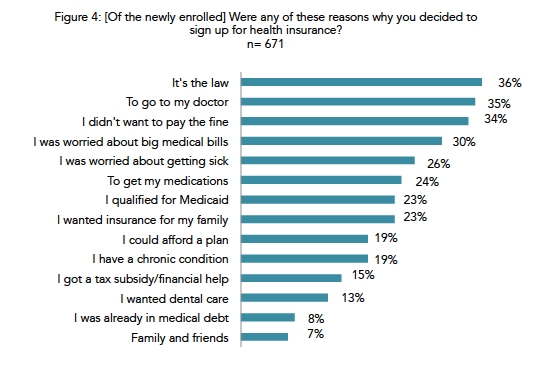 Second, let’s review how ObamaCare was passed in 2010. It happened in the middle of the night through a change in Senate rules and without a single Republican vote. Then-Speaker Nancy Pelosi (D-Calif.) is now infamous for saying, “We have to pass the bill so you can find out what is in it, away from the fog of the controversy.”

Yes, it's true that the law passed without a single Republican vote, even though the Dems threw a ton of Republican-friendly concessions into the law including (ironically) the "states rights" provision that allowed for the creation of state-based exchanges instead of forcing everyone to go through a single federal exchange. We all saw how that worked out.

However, again, thanks for reminding everyone; let's state that again, in bold:

The law which got rid of denials for pre-existing conditions, allowed young adults to stay on their parents' plan until they turn 26, which requires insurance companies to spend at least 80% of premiums on actual healthcare expenses and which made it illegal for insurance companies to kick you off of your policy just because you actually, you know, get sick...was brought to you PURELY BY THE DEMOCRATIC PARTY, PERIOD.

According to research from the Manhattan Institute, health insurance premiums for people living in a number of states across the country have gone up by more than 100 percent.

This is disingenous, and even if it wasn't, premiums for people living in "a number" of other states have gone down since last year. For that matter, premiums had been rising by an average of 11% per year prior to the ACA being signed into law anyway, which means that whether it had passed or not, rates would likely be a good 50% or higher than they were in 2010 by now anyway, barring some other significant healthcare-related legislation.

Overall, costs to the taxpayer have been enormous, with $2 billion spent on HealthCare.gov, which didn’t work properly for a year, and an estimated $2 trillion in addition to enforce ObamaCare over the next 10 years. Data from a Government Accountability Office report released in 2013 has been cited showing ObamaCare adds $6.2 trillion to the long-term U.S. deficit, a far cry from liberal claims that deficits would be reduced as a result of the law.

Hmmmm....$2 billion, you say? Yes, that is a lot of money; that's around $260 per enrollee (assuming 7.75 million of the 8.8 million HC.gov enrollees actually pay their premiums this year). Of course, that compares pretty favorably with Republican Senator Marco Rubio's "anti-Obamacare" exchange, "Florida Health Choices", which has cost over $57,000 per enrollee. That's just 220x as much, but whatever.

UPDATE: In fairness, I should also add in the cost of the other 14 state-run exchanges as well. The cost estimates vary (in fact, earlier estimates put HC.gov at $3.5 billion, but later estimates (from right-wing sources the Weekly Standard and National Review, I might add) peg the HC.gov cost at somewhere between $1.7 - $2.1 billion, which I presume is where Ms. Pavlich came up with her own $2.0B figure); the only one I've found which seems comprehensive lists the tab as $3.9 billion collectively.

That means that Sen. Rubio's Florida project has "only" cost about 100x as much per enrollee as the ACA exchanges combined.

Also, you have a slight typo there; I think you meant "...which didn't work properly for 2 months, worked reasonably well for the rest of the year, and has worked quite smoothly since last November".

As for your "$6.2 trillion added to the deficit" claim: I'm assuming you meant "debt" not "deficit" (deficit refers to a single year...which contradicts your "long term" description, and I find it hard to believe that any policy is going to increase a one-year deficit by 60% more than the entire annual budget). Anyway, that "long term" you refer to is spread out over a whopping 75 years, which is rather silly. Even assuming that proves to be 100% accurate (come back in 2090 and we can take a look), that's $83 billion per year--not chump change, I admit, but let's knock a few zeroes off the end, shall we? Plus, of course, any number of things could change over the next 7 and a half decades...for instance, the CBO just projected that the ACA will cost $142 billion less over just the next ten years than they thought back in January (that's $14.2 billion less per year). The January projection was itself $68 billion (over 10 years) lower than they had projected in April 2014...and even that was about $100 billion less than they had thought in an earlier estimate.

Now, I may be comparing apples and oranges here; it's possible that the CBO's estimates aren't counting the same numbers as the GAO's 2013 report...but assuming they are, it sounds an awful lot to me like instead of $83 billion per year, we're now looking at around $52 billion per year. Again, that's still a lot of money, but that's still about 37% less than your scary-sounding $6.2 trillion.

Further, and most detrimental, is the mass retirement of doctors. According to a 2013 study from Deloitte Center for Health Solutions, 62 percent of physicians will retire early with 55 percent limiting their work hours due to new rules and regulations. Not to mention the millions of people who lost their doctors and coverage because of ObamaCare, despite the president repeatedly promising that would never happen.

Hmmmm...I take it you mean this study?

Let's see here...regarding your "62% of doctors will retire early" claim, here's what the study actually says:

Also, "due to new rules & regulations" was not listed as the reason for this belief by most doctors. The study actually says:

By medical specialty, the greatest elements of job dissatisfaction among physicians not currently satisfied with practicing medicine are:

OK, so only 22% seem to think that "government regulations" are the biggest gripe they have (and that doesn't necessarily mean that they're "retiring" or "cutting back" because of them, just that they're grumpy about the regs...which may or may not have anything to do with the ACA in particular).

Huh. Lessee, what else does this physician survey, which Ms. Pavlich touts so strongly, have to say about Obamacare?

Hmmmm...so, 40% of 40% (that is, just 16%) thought that their income dropped due to the ACA in 2012...and this is down from 48% who had thought that their income would decrease in 2011. Apparently 52% of doctors knew better than to flip out before seeing what happened, and another 32% calmed the heck down once they realized that Obamacare wasn't destroying their practices.

As for the remaining 16%? Well, perhaps the ACA did have some negative impact on their income...but then again, they might have been among the "over half" who saw their income drop by "10% or less"...and just because they think the ACA was to blame doesn't prove that it was. For that matter, what if some of those 16% happened to be committing fraud, performing unnecessary tests and so on? Wouldn't it be a good thing for the ACA to "cut the income" of doctors if that income was unnecessary tests/procedures? I'm not saying this is the case, mind you.

Not to mention the millions of people who lost their doctors and coverage because of ObamaCare, despite the president repeatedly promising that would never happen.

OK, you got me there. Yes, that was a pretty dumb thing of President Obama to say. As I noted last fall:

President Obama saying "if you like your policy you can keep it" was foolish for the same reason that stating "If you like Facebook exactly the way it is, it will stay that way forever!" or "If you like the iPhone 4S, Apple will have to keep it available for purchase until the end of time!" would have been foolish.

So yes, some policies were cancelled last year, and some will be this year. Most people will replace them with new policies, most of which will have more comprehensive coverage than the old ones. Life will go on (in fact, for many of those who couldn't get insurance before the ACA due to having pre-existing conditions, life will literally go on).

The House has voted nearly 60 times to repeal ObamaCare in some fashion, whether it’s stripping out mandates or defunding the legislation altogether. Those efforts should continue. GOP presidential candidates will run on the promise of repealing the disastrous law, and if elected, they should follow through on those promises from the Oval Office.

Ooooh...yes, please, please, more of this.