UPDATED x2: In which I apologize to FOX News' Bret Baier (yes, you read that right)

Fox News cited an unnamed "independent expert" to cast doubt on the veracity of recent Affordable Care Act enrollment numbers, which have exceeded 16 million Americans and are reported to have driven the largest reduction in uninsured persons in 40 years.

...On the March 16 edition of Special Report with Bret Baier, host Bret Baier briefly reported on the enrollment numbers, offering the unevidenced claim that "an independent expert says the reality is fewer than 10 million people have signed up."

I suppose I could write a lengthy screed explaining 8 ways from Sunday how utterly full of garbage that is (i.e., if you don't include Medicaid, don't include sub26ers on their parent's plan, don't include off-exchange enrollments and don't bother including the 14 states running their own exchanges), but really...why bother? FOX has literally pulled a number out of their ass here. I can do the same thing:

"FOX News claims that none of their on-air personalities have molested goats. But an independent expert says that at least 40% of them have."

See how easy that was?

UPDATE: Well whaddya know? Bret Baier himself apparently took offense to my speculating about his posterier being the unidentified source, so he's personally responded:

And sure enough, here's Fox's source:

But measuring a different way, an independent expert who took into account insurance losses during some of those years had a much lower estimate: 9.7 million.

The Department of Health and Human Services estimated that 16.4 million adults have gained health insurance since the law's major coverage provisions began taking effect in 2010.

The lower independent estimate is based on a large daily survey called the Gallup-Healthways Well-Being Index.

...According to the HHS estimate, 14.1 million adults got their insurance after the law's big expansion began at the end of 2013. HHS said it used Gallup-Healthways data to arrive at that figure.

...Gallup's lower number was computed in a different way.

Dan Witters, research director for the Gallup-Healthways Well-Being Index, said his survey shows the uninsured rate declined from 16.3 percent in early 2010 to 12.3 percent this year among adults 18-64. That translates to about 9.7 million fewer uninsured adults over that time period.

OK. First of all, credit where due: Mr. Baier has indeed given his source, and the source certainly is a reputable one...interestingly, the same Gallup poll that HHS is using.

So, thanks for that, and I'm actually going to do something I never thought I'd do: Apologize for being rude to FOX News. There, I said it.

So, how on earth can the same data from the same source generate such different results?

Well, as I've noted in the past, it really depends on whether you're going by the monthly, quarterly or annual numbers, since the uninsured rate jumps around a lot. In this case, the "early 2010" rate of 16.3% appears to be from this Gallup survey:

The close to 300,000 surveys Gallup has conducted so far in 2010 find an average of 16.3% of Americans reporting being uninsured at the time they were interviewed. More Americans on average have government healthcare and fewer have employer-based coverage so far in 2010 compared with 2009 and 2008.

I should also note that I was a bit surprised to see Mr. Witters give the age range surveyed as "18 - 64" when Gallup's own survey methodology clearly states it as being over 18 only, with no upper age limit:

Results are based on telephone interviews conducted Jan. 2-Feb.28, 2014, as part of the Gallup-Healthways Well-Being Index survey, with a random sample of 27,855 adults, aged 18 and older, living in all 50 U.S. states and the District of Columbia. For results based on the total sample of national adults, the margin of sampling error is ±1 percentage points at the 95% confidence level.

If you go by the starting point of the ACA being signed into law (March 2010), Gallup does indeed have the uninsured rate being 16.3%, vs. 12.3% as of February 2015. That's a drop of 4 percentage points. what does that mean in actual numbers? Well, bear in mind that the national population has grown from around 309 million total in 2010 to around 320 million as of early 2015; those 11 million additional people confuse the comparison a bit. Also remember that again, these surveys don't include children under 18, which make up around 24% of the total population, and whose uninsured rate has always been lower than the population as a whole.

Note that I actually found this a bit questionable on Monday.

So, here's what it looks like when you list all of the quarterly Gallup polls in a row. To me, if you're going to use the Gallup-Healthways index as your data source (and HHS claims to have used it for their primary source), all this "blending" stuff seems a bit disingenuous. Instead, I'd just go with the actual quarterly Gallup surveys and compare the starting and ending points. This gives the following: 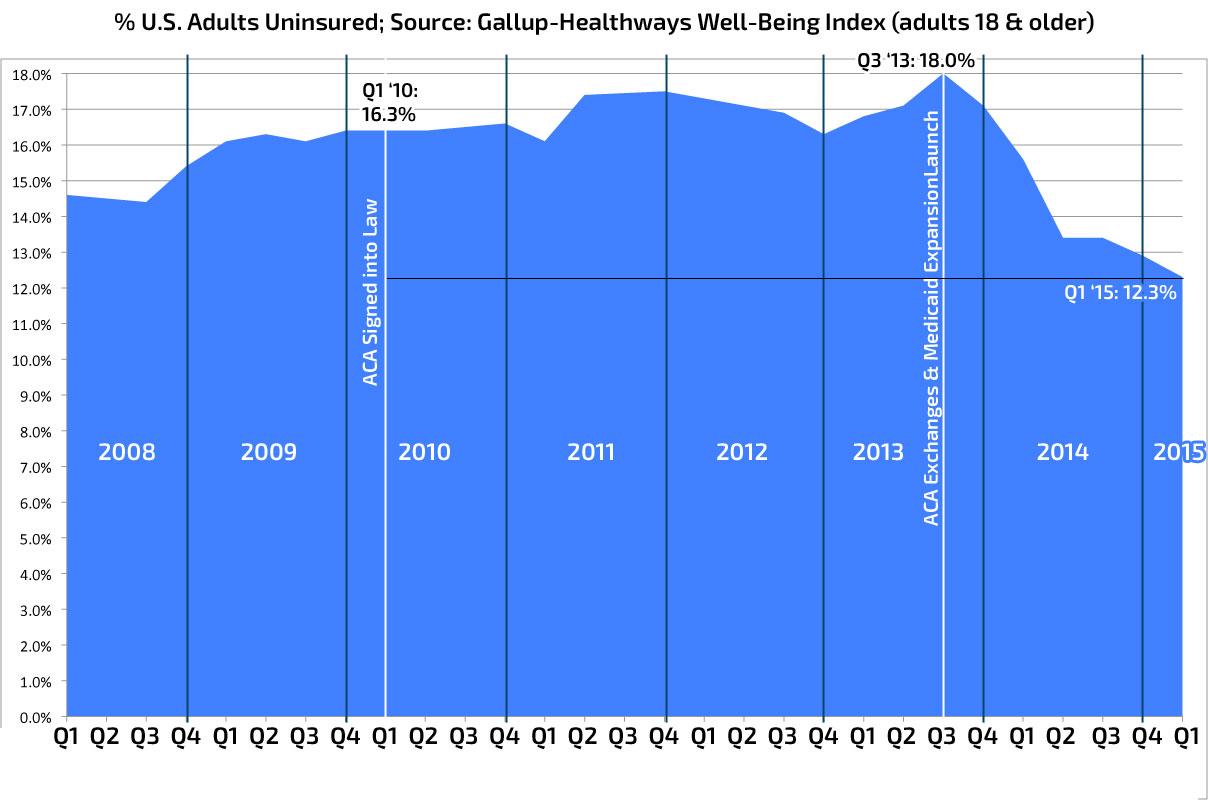 This is exactly why I found starting with the signing of the law so questionable in the first place. As you can see, the uninsured rate jumped around a lot between 2010 and 2013. For that matter, it's a bit silly to use March 2010 as the base point since even the earliest provisions of it took several months to actually get implmented; the "sub26er" rule didn't kick in until October 2010, if I recall, and it's not like every one of those 2.3 million young adults pounced on it all at once.

That doesn't mean that those 2.3 million "sub26ers" shouldn't "count", but in terms of the total NET uninsured rate going down due to the Affordable Care Act, that didn't clearly kick into effect until the 4th quarter of 2013, when the ACA exchanges and Medicaid Expansion enrollments started up.

If you use that as your starting point (Q3 2013, just before the exchanges launched), Gallup had the uninsured rate at 18.0% of all 242.7 million adults...or around 43.7 million people, give or take. That's a net uninsured reduction (including population growth) of 13.8 million (remember, HHS claimed 14.1 million since 10/1/13 in thier report on Monday, which is well within the MoE here).

According to a study by PolitiFact, FOX News lies 60% of the time*, so I had strong reason to suspect they made this claim up. This appears to be among the 40% of the time that they actually tell the truth...with one important caveat:

*UPDATE: Some have pointed out that the "lies 60% of the time" figure itself may be questionable, since obviously PolitiFact can't track every single factual statement made by FOX. Fair enough. Here's 50 specific statements made on FOX News which PolitiFact has confirmed as being "false", "pants on fire" or "mostly false".

The total number of people who have "signed up" (for Exchange-based QHPs, Off-exchange QHPs, Medicaid expansion, SHOP policies, etc.) since October 2013 is over 33 million people. It's just that over half of these people were switching from other types of coverage.

In short, my beef with FOX and Baier here is 1) they didn't cite the source (when they easily could have, ironically) in the first place, and 2) they conflated "signing up" with "net reduction in the uninsured" which are two very different numbers.

Still, again, credit to Mr. Baier is due: I questioned both the identity and credibility of his source, and he provided both.

UPDATE x2: I see that the FOX Nation folks have spotted my apology. Welcome, I guess.

Since this post seems to have turned into a Thing® today, I should also reiterate something else that I noted on Monday:

...The irony here is that they could have touted the "35% reduction in the uninsured rate" just as loudly if they had used October 2013 as the starting point. According to Gallup, in Q3 2013 the adult uninsured rate was 18.0%, and was down to 12.3% as of February 2015. That's a reduction of 31.7%, and doesn't include children under 18 or the 2 million or so exchange enrollees whose policies started on March 1st (as well as a bunch more Medicaid/CHIP enrollees). Throw those into the mix and I'm pretty confident that the overall insured rate is indeed down 35% since just 10/1/13.