It's important to stress that this is not the final enrollment report for Massachusetts; it's the final daily report, which only includes the number of people determined eligible to purchase a private policy (Medicaid enrollees, however, are instant-activation; the number listed here is the number actually enrolled as of that day).

For most of the open enrollment period, QHP selections were running around 45-50% of the total QHP determinations; the other half are people who hadn't actually completed the process or who accidentally submitted 2 applications or whatever.

However, for the final week, it's pretty safe to assume that anyone who bothered to create an account, fill out their info and submit their application was pretty likely to actually put a policy in their shopping cart and check out (as well as paying their first premium on the spot), since yesterday was the (extended) deadline to do so. Therefore, it's a pretty safe bet that all 2,816 of those listed below (of the 7,057 total, which also includes MassHealth), at a minimum, can be added to the total.

That means that the total QHP selection tally should be at least 143,000...and could, theoretically, be as high as 246,397, assuming every single one of the remaining determinations was an individual person who actually came back and checked a plan out. Obviously that's highly unlikely, but 150K-160K would certainly be reasonable.

The actual number won't be announced until Friday's weekly report, which will also let us know "How many have PAID???" (it's a bare minimum of 101K, but likely far higher than that in the end). 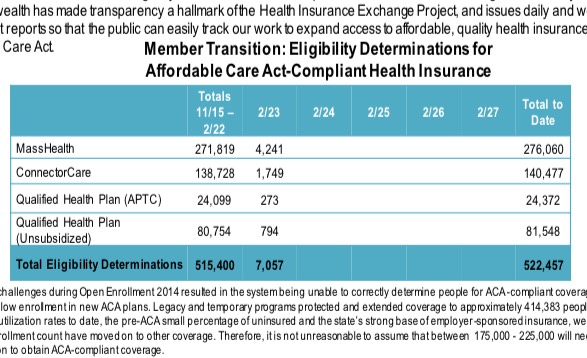