When the dust settles, who will prove to be more accurate...the head of the Health & Human Services Dept...or me? :)

A couple of days ago, I took a look at my own target to see whether 12.5 million still seems realistic or not. I looked at the data from several different angles, and concluded that 11.6 million should be the bare minimum QHP tally, which would essentially split the difference between 10.4M & 12.5M.

I went back to my 2014 spreadsheet, and as far as I can tell, it looks like total QHPs crossed the 5.4 million mark at midnight on March 24th. They hit 7.1 million as of midnight on March 31st. That means they managed to enroll roughly 1.7 million in the final 7 days of the official enrollment period. My projection assumes around 2 million in the final week of 2015's open enrollment period, which isn't all that much higher (I was actually surprised by this; I hadn't checked those particular numbers when I came up with my 2015 "curve")

Let's look at the individual states again (reminder; in this context, "underperforming" only refers to being measured against my state-level projections, which may not have been realistic in the first place). On February 3rd, I reduced my targets in 9 states, but raised them in 26 other states (albeit not as dramatically). The two pretty much cancelled each other out.

Today, with a couple more weeks worth of data baked in, I'm making some further, final adjustments (and in fact I've tweaked every state except for Iowa and Tennessee): 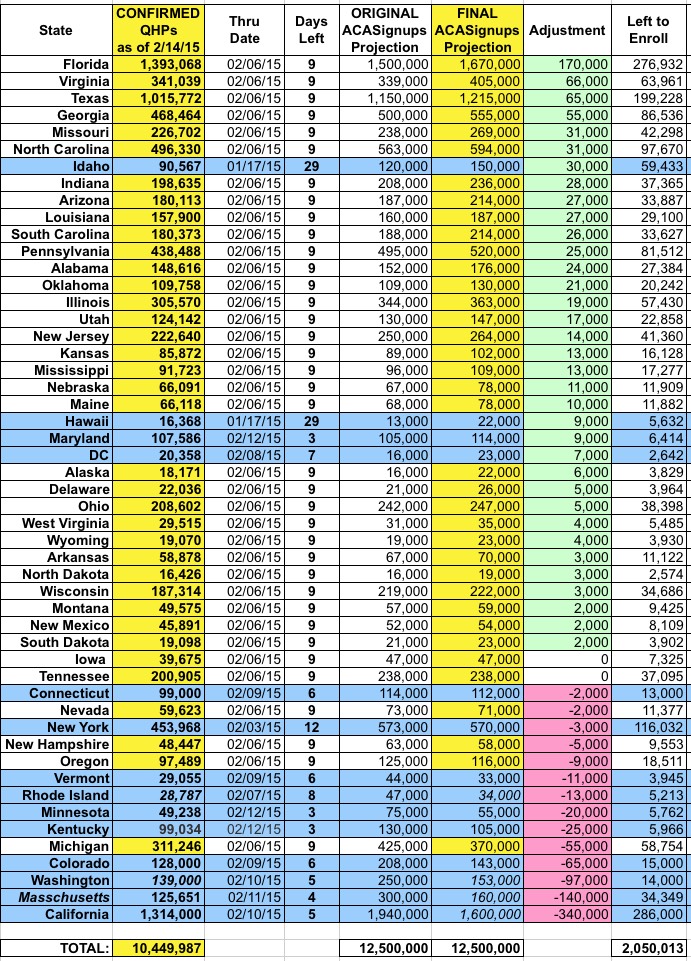 In the end, I'm cutting my projections in 14 states, with the following caveats/explanations:

And yes, I did note that only 4 of the 14 states (MI, NH, NV & OR) are being run through HC.gov...and 2 of those, Nevada and Oregon, were only brought onboard HC.gov this year. I'll let others ponder the significance of this.

So, that's a total reduction of 765,000 QHP selections. If that was the whole story, I would reduce my national projection down to around 11.7 million and call it a day.

HOWEVER, I've also increased my final targets for practically every other state. I won't go into detail on all of them, but here's the major ones:

Now, obviously the final number is not going to be exactly 12.5 million, and the overperforming states aren't going to exactly cancel out the underperformers.

Still, I'm pretty confident that when the dust settles, it'll be somewhere between my original projection (12.0 million) and my official one (12.5 million)...although I suspect it'll still be at the higher end of that range; let's call it between 12.2 - 12.5 million.

In other words, yes, I'm finally backing off of my until-now steadfast 12.5 million figure...but that could just as easily be proven to be right on the nose, or even undershooting.

On the other hand, at the moment the following message is showing up on the Massachusetts exchange website...