On Wednesday the 11th, HHS should issue a report including all HC.gov QHP selections as of Friday the 6th. I'm expecting the total to be roughly 7.75 million, or about 276K for the week.

Aside from being absurdly accurate (yay, me!), the other number that leaps out at me is that there are still a good 2.9 million people who have submitted QHP applications but hadn't actually pulled the trigger and selected a plan as of 2/06. I'm expecting the final HC.gov tally to end up around 9.4 million, which would only require 57% of these folks to complete the process...and that's not even including the expected final surge of people who are just now getting around to starting the process. And remember, we're just talking about the 37 states on HC.gov right now...if 83% of those 2.9 million finish the job, the national total will hit 12.5 million even if not a single additional person enrolls via the 14 state-based exchanges beyond those already confirmed.

Granted, a lot of these incomplete applications could be duplicates (people setting up 2 accounts but only using one, etc), and even the ones which aren't dupes won't all be completed (some folks may change their minds, go off-exchange, have gotten a job with ESI in the past month or so, etc), but I'm pretty confident that at least 57% of these are actual poeple who do plan on completing their enrollment by 2/15.

Here's the last state-by-state breakdown before the Final Surge (again, I highly doubt that they'll bother issuing a 13th "weekly snapshot" when that would only leave the final 2 days of the enrollment period out): 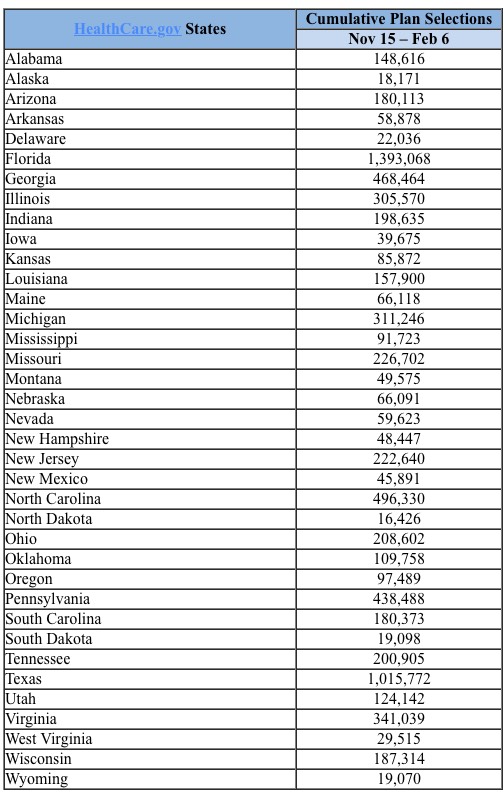 I'm plugging the latest numbers into The Spreadsheet even as you're reading this, and will have further analysis in a bit.