Massachusetts: All's Quiet on the Bay Stater Front, but should start heating up quickly

With yesterday's 1,737 QHP determinations, Massachusetts has likely tacked on another 800 QHPs or so, bringing them up to around 117.5K. In order to reach the 170K target I've estimated, they'll have to enroll about 52K in just 11 days, or a whopping 4,700/day.

I won't know until their weekly report tomorrow whether my "45% of determinations" ratio still stands. At this point the other half of the lingering QHP determinations should start to be kicking in...there's over 214K total; if 117.5K have already selected a plan, that means there's still another 96K people who have gone through about 2/3 of the process already; most of them should be coming back to complete the job now. 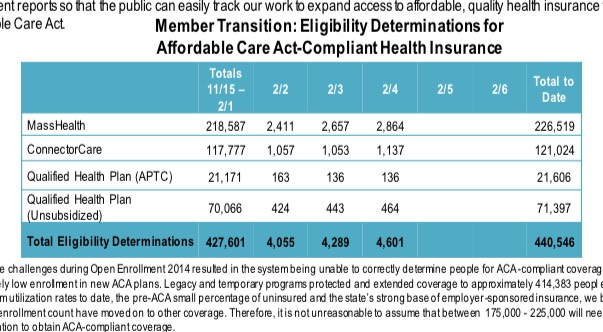