This update from MNsure comes not from their normal Enrollment Update page (which still only runs through 1/23), but from their monthly board meeting report from 1/28: 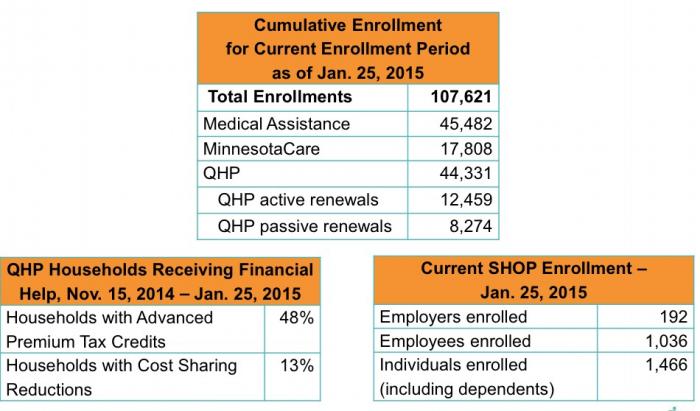 Huh. The actual QHP numbers are fine--that is, Minnesota is still lagging behind where they should be, but they've added 201 over the past couple of days, which is fine given that we're in the slowest part of the enrollment period.

However...what's going on in the lower-left? "Advanced Premium Tax Credits" is the government-ese name for "Tax Subsidies'. In most states they're averaging somewhere between 80-90%...yet in Minnesota, it's less than 50%? What's up with that?

In addition, Minnesota is the only state which has implemented a "Basic Health Plan", aka "MinnesotaCare", which was allowed for by the ACA and which is sort of a public/private hybrid program. As you can see, nearly 18,000 people have enrolled in this program for 2015, and pretty much all of them would otherwise be enrolling in QHPs with heavy tax subsidies. If that were the case, instead of 44.3K enrollees with 48% receiving credits, Minnesota would be boasting over 62,000, with 63% receiving credits.

However, even taking that into account, 63% is still much lower than average. I'd imagine that the rest has much to do with both their lagging enrollment overall as well as the unfortunate withdrawl of 2014's exchange-leader PreferredOne from MNsure this year. Anyway, it's kind of interesting.

UPDATE: Thanks to Joe Campbell of MNsure for pointing out that in addition to the 17.8K new MinnesotaCare enrollees who would otherwise likely have enrolled in QHPs, there's something like 60-80,000 MinnesotaCare enrollees from last year who are being renewed as well who would otherwise have enrolled in QHPs this year. Obviously not all of them would have done so yet, but assuming, say, 50K of them had done so by now, that would actually be about 68K more QHPs who would all have qualified for tax credits in addition to the 21.3K who did...making a ratio of 89.3K / 112.3K with credits, or around 80%...which is right at around the same range as most other states.

Here's a bunch of other interesting demographic stuff as well: 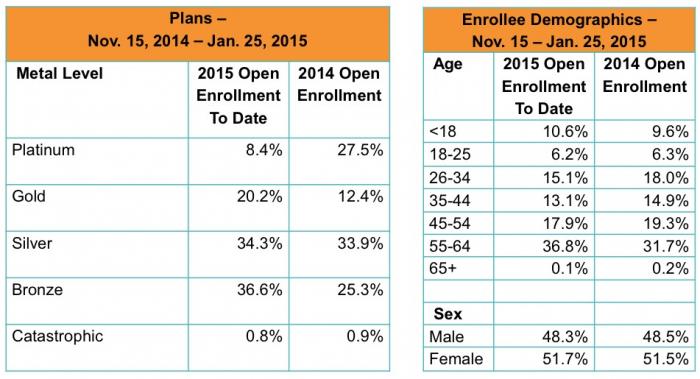