Yesterday I posted an article in which I attempted to coin the term "Halbig Conspiracy!!®" (complete with not one, but two exclamation points). However, others including Kevin Drum of Mother Jones and Brian Beutler of the New Republic prefer the term "Halbig Truthers®", which I have to admit rolls off the tongue better, so I'll go with that instead.

In any event, last night Drum made a (tongue-in-cheek?) offer to give $10 to anyone who:

...can point out a conservative who so much as suspected that subsidies were limited to state exchanges prior to March 2010. Surely that's incentive enough? Let's start digging up evidence, people.

This led to a brief Twitter exchange in which Vox's Adrianna McIntyre offered to match Drum's $10, and I upped the ante (um...sort of) by offering up my collection of mint-condition official Todd McFarlane "Spawn" promotional action figures to sweeten the pot (I was a movie theater manager in a prior life and these were left over after the live action movie bombed in 1997). 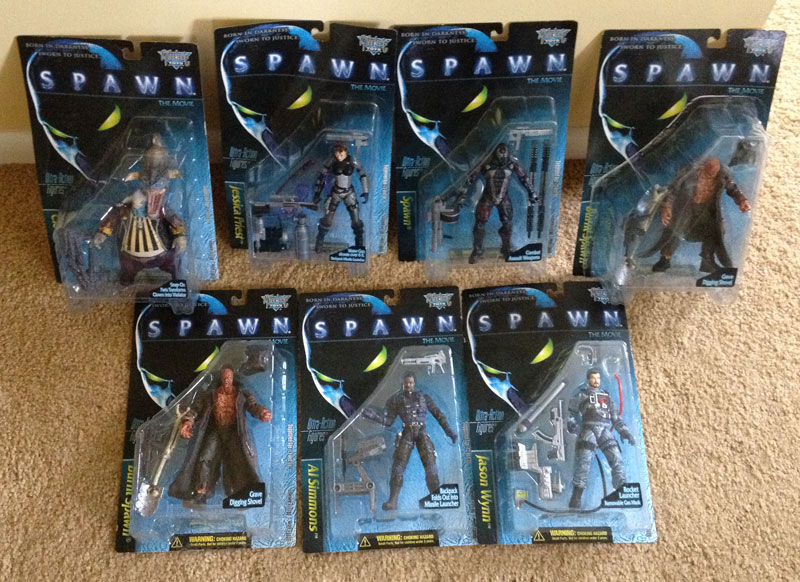 All snark aside, a regular follower of this site, Eli Gerber, pointed out that Avik Roy actually did write an article about the Halbig case before it was even a case...except that even that was in September 2011, long after the bill had been passed and signed into law.

While this doesn't meet Drum's $10 criteria (he was referring to references before the law was passed), the Roy article does have a couple of interesting bits which tie directly into the Halbig claims about "no reference to tax subsidies via the Federal exchange" being done deliberately instead of by accident:

But that’s where the glitch comes in. Section 1401 of the law, along with numerous other sections, refers to the “premium assistance” subsidy as being available only to taxpayers “which were enrolled in through an Exchange established by the State under [section] 1311 of the Patient Protection and Affordable Care Act.” (Emphasis added.) There’s no mention of subsidies being available to individuals who participate in exchanges established by the federal government.

The Treasury Department tries to work around the glitch

Jonathan Adler (who, with Michael Cannon, has been the chief driving force behind the Halbig case):

Jonathan Adler, writing at the influential legal blog The Volokh Conspiracy, agrees that Congress may have made a mistake, and that the IRS doesn’t have the latitude to invent provisions where they don’t exist:

The exchange-related provisions of the law were not written all-that-carefully. Nonetheless, federal agencies lack the authority to unilaterally revise statutory mistakes. (A point Cato’s Michael Cannon also makes here.) Congress may have wanted to make tax credits more widely available — just as it may have wanted those making less than poverty-level income to be eligible for exchanges as well — but that is not what Congress did.

If you follow the link to Cannon's piece, he again uses the term "glitch" in both the headline and the opening sentence of his piece.

So, ACA opponents Avik Roy as well as both Adler and Cannon themselves admit, more than a year and a half after the final version of the law was signed, that the "established by the State" bit either was or at the very least may have been a "glitch" or a "mistake." A glitch is technically defined as "a short-lived fault in a system" but in common parlance means a mistake or unintentional error.

Again, I'm neither a lawyer nor a legal scholar. It's entirely possible that either the full DC Circuit Court or the SCOTUS may rule based on the precise wording of that particular phrase instead of looking at the larger context of the law as a whole. None of the yammering back and forth between ACA defenders or opponents is likely to have any impact on the actual court decision, of course. Even so, people should stop trying to claim that this was some sort of Democratic bluff (which they then apparently then kept secret, which would completely negate the entire point of such a bluff), when both of the "chief architects" (the term often used to describe Jonathon Gruber when it comes to the ACA itself) of the Halbig case openly describe the wording as being done by accident instead of by design.