When I first attempted to sort out the complicated Medicaid/CHIP enrollment data to figure out which enrollments should be counted and which shouldn't, one of the most important things I learned from my contact at CMS was that the CMS monthly reports include the exchange-based Medicaid/CHIP enrollments for some of the state-based exchanges/marketplaces (SBM's), but not for others (or for the 36 federally-run states). However, they didn't tell me which states this applied to, so I carefully read the actual monthly CMS reports to find out.

If you look at the footnotes on Page 6 of the December CMS Report, you can see that according to the official CMS report there are only two states in which the report includes SBM data for Medicaid and CHIP Determinations (columns VI and VII): Maryland and Massachusetts. There are no other states listed as inlcuding SBM data for those columns. A couple of other states (California, Rhode Island) do mention including applications from the SBM's, but not the actual determinations, which are what we're talking about here. The reports for October and November only include SBM determinations from MD and MA as well: 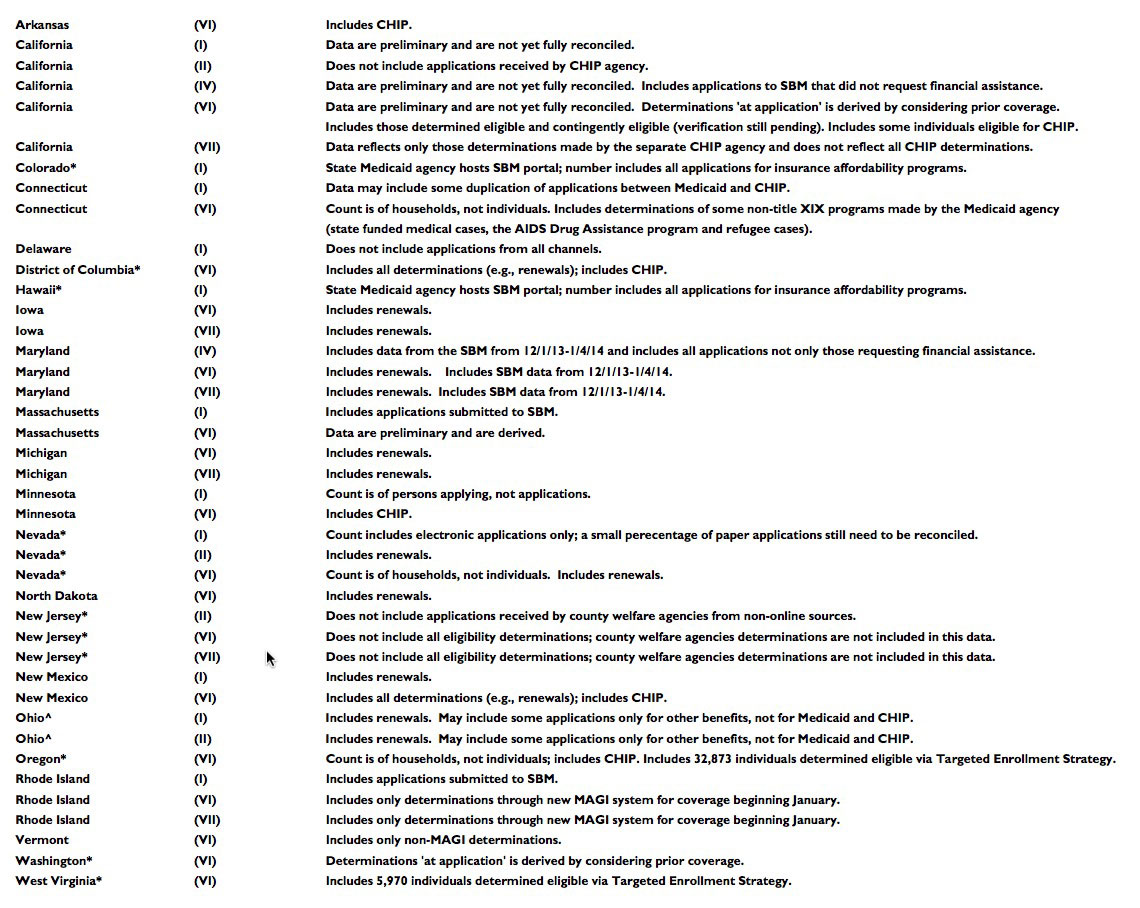 More to the point, notice that WASHINGTON only has a single note of any sort next to it, which has nothing to do with the SBM (state-based marketplace, aka the Washington Health Exchange).

In other words, until yesterday, I was confident that the CMS report was not double-counting exchange-based Medicaid/CHIP enrollments for Washington State, and that therefore any enrollments listed on the CMS report were direct/off-exchange enrollments...that is, people walking into a state Medicaid office, filling out a form, calling them up and so on.

HOWEVER, last night I received an email from Mike Haggerty, a site visitor who alerted me to the possibility that I might be double-counting WA's Medicaid/CHIP numbers after all.

So, today I checked into it. I contacted Bethany Frey, Media Contact for the Washington Health Exchange, and asked her a simple question:

I'm trying to find out whether that data [from the WA Health Exchange's press releases] includes off-exchange Medicaid enrollments as well...In other words, is the WA Exchange handling ALL Medicaid enrollments for EVERYONE in Washington now, or are some people enrolling via other means?

Her response was simple and to the point:

Yes, we have a “one door approach” here in WA. Everyone who is newly enrolling or redetermining their coverage must come through wahealthplanfinder.org.

Which means that I now have to wipe out a whopping 312,285 Medicaid/CHIP enrollees from the spreadsheet and graph.

This also calls into question whether I'm double-counting any other states as well, since the CMS report footnotes say nothing about any other state exchange determination data being included on their report either.

And that is another reason why I'm giving the Avalere Health report so much influence. They forgot to include about 1.3 million legitimate enrollees themselves, but they also pointed out that I've been including a lot of other enrollees who it turns out I shouldn't be.

And with that, I'm lopping the top-end Medicaid number from 14.06 million down to 13.7 million (the low-end number stays at around 2.4 million, however, since this isn't impacted by the Washington change). The irony of this error is that Washington is also the state which has been including the most precise data in their press releases.