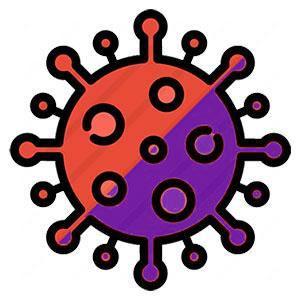 For a long time I used July 1st, 2021 as my start point, but in December I decided to back this up to May 1st, 2021 instead. Pinning down an exact date for this is a bit tricky since a) different populations were made eligible at different points in 2021, and b) it takes 3-4 weeks after getting your first vaccination dose before you can get the second one, but May 1st is what I've finally settled on. This doesn't really change things much, however.

There's still a clear and dramatic correlation between how much of the population has been 2-dose vaccinated and its COVID death rate since last May. The least-vaccinated decile has a death rate ~3.6x higher than the most-vaccinated decile. It's important to note that this jumps around a bit from month to month since a few counties move from one decile bracket to the other as vaccination data is bulk-updated: 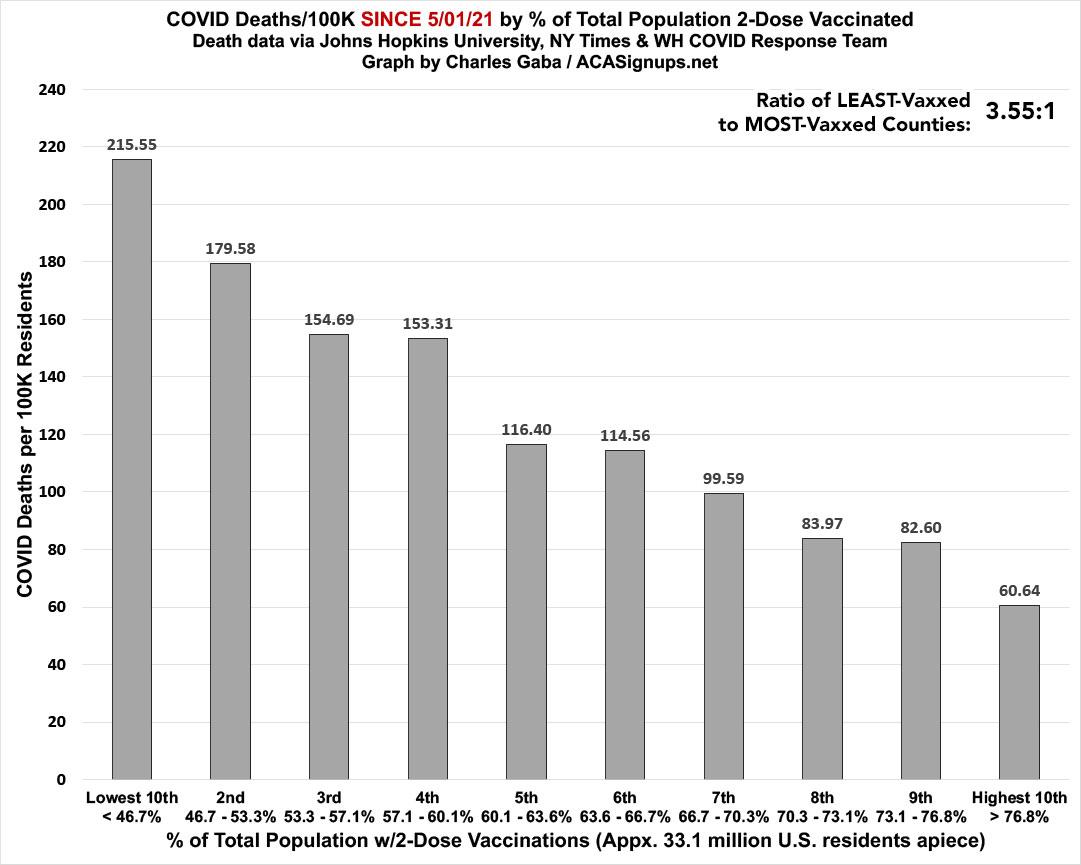 As always, what's even more disturbing is how closely the death rate by partisan lean matches the death rate by vaccination rate; they're nearly mirror images of each other: The death rate since last May in the reddest tenth of the country is 3.2x higer than in the bluest tenth: 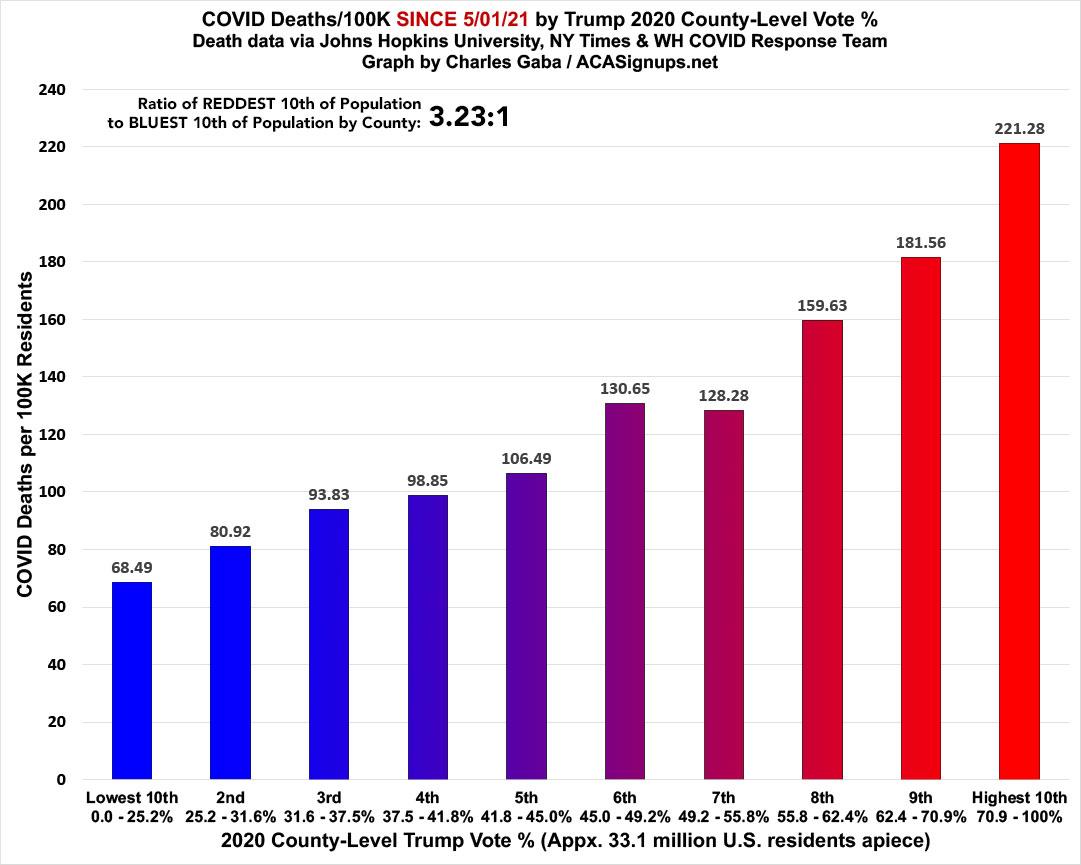 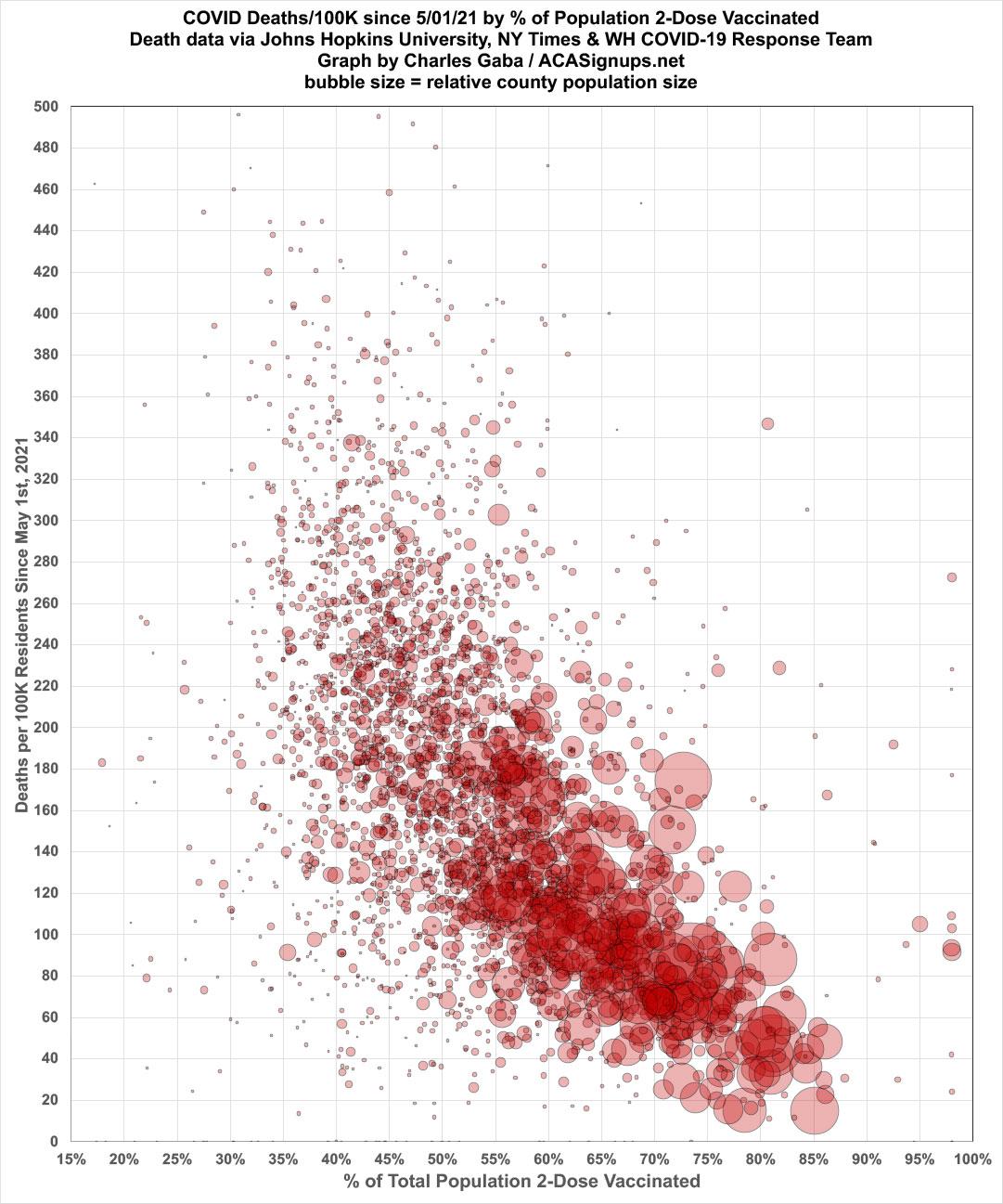 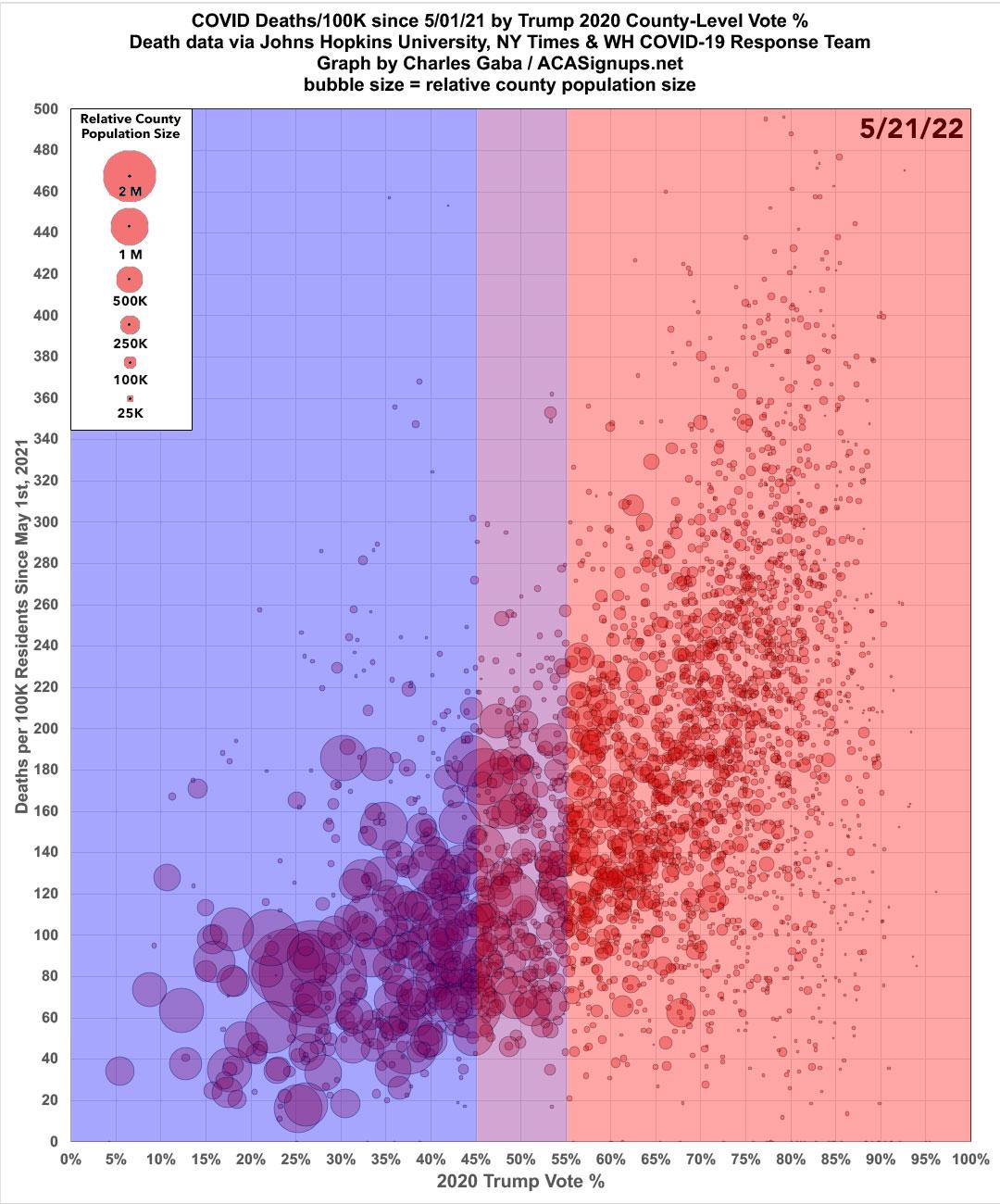 The graph below shows how the ratio of case and death rates in the reddest and bluest deciles have changed over time. The gap reached a peak of 4.5x higher at the height of the Delta wave last fall before dropping significantly during the Omicron wave...but since then it's flattened out and has held relatively steady for the past couple of months, aside from a one-time bump in March 2022 caused by a one-time data adjustment by the Massachusetts Health Dept.: 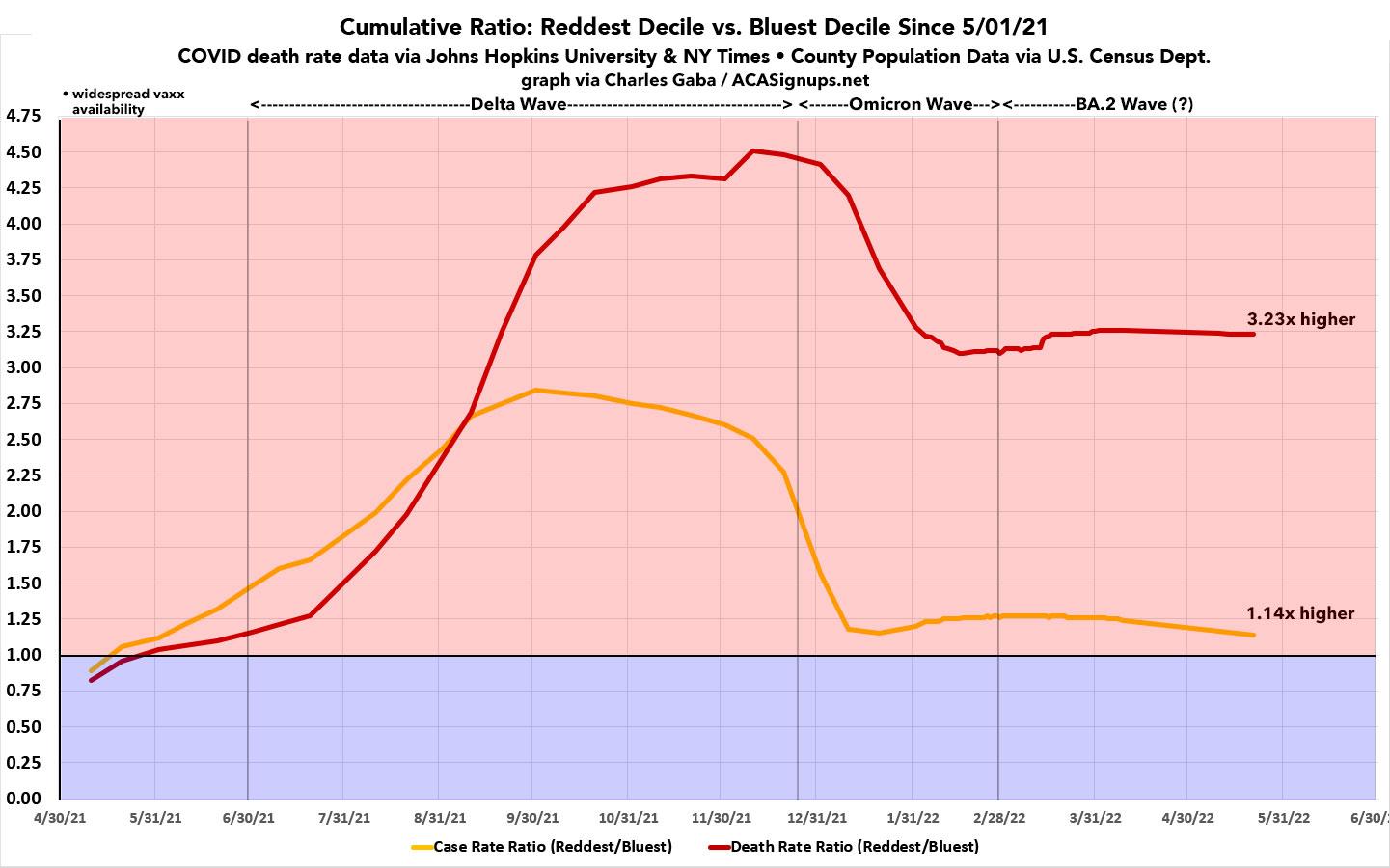 The final graph below shows the 14-day moving average of the death rates in the reddest & bluest deciles, dating all the way back to January 1, 2021. As I predicted back in late December, after reaching near parity in late January, the death rate in the reddest parts of the country has again been 3-4x higher than the bluest parts for several months. Axios recently posted a state-level version of this graph, although in that case they went with states where Trump or Biden won by 15 points or more: 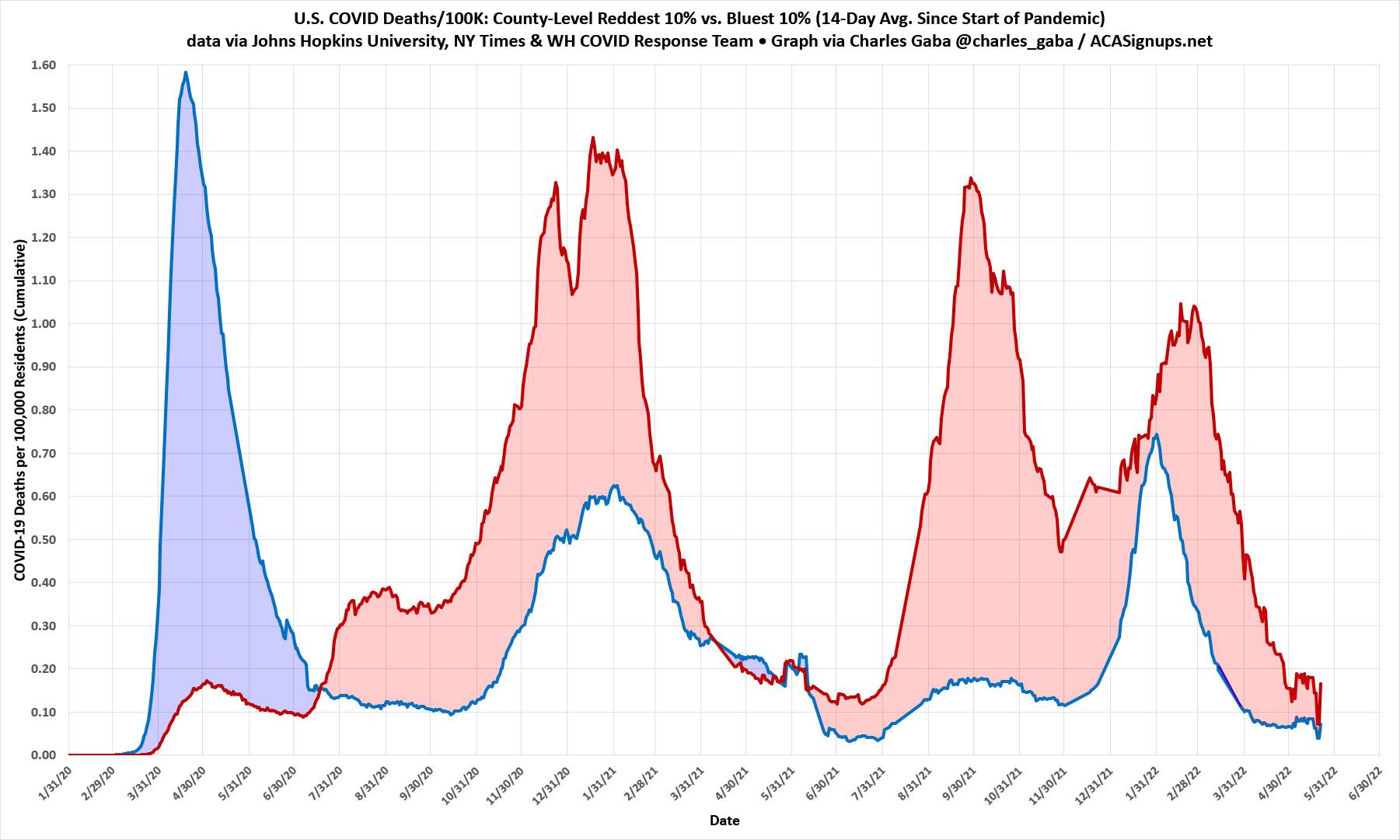