More recently, I've switched to posting the same data starting on December 15th, which is (roughly) the start of the Omicron variant wave (although this is fuzzier than the start of the Delta wave).

First, the partisan breakout: The case rate ratio is a very different picture under Omicron. For the first two months of Omicron, case rates are 1.13x higher in the BLUEST decile than the reddest. It's worth noting, however, that this is down from 2.2x higher seven weeks earlier: 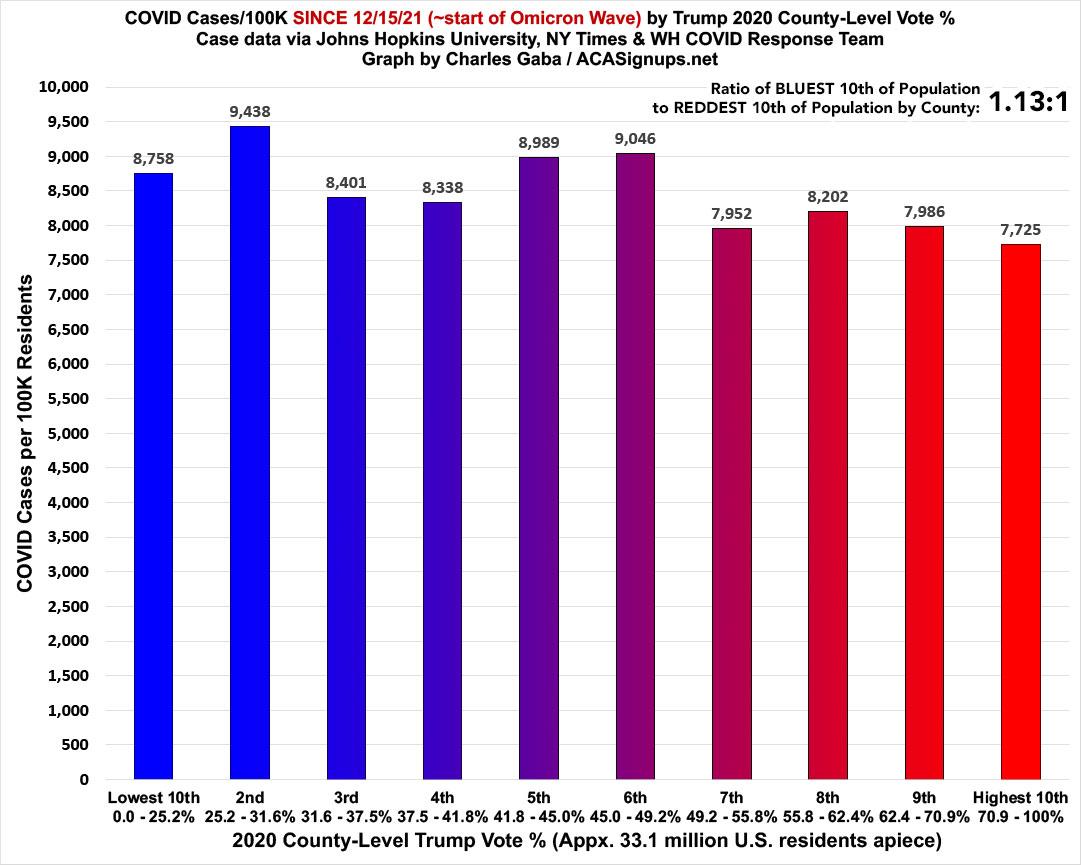 Death rates since Omicron started still swing red, as the death rate in the reddest decile is 1.96x higher than in the bluest. This is down from 2.9x higher seven weeks earlier, however, and down from nearly 5.8x higher during the Delta wave. On the other hand, it's up from 1.86x higher last week, which I'll be talking about more below... 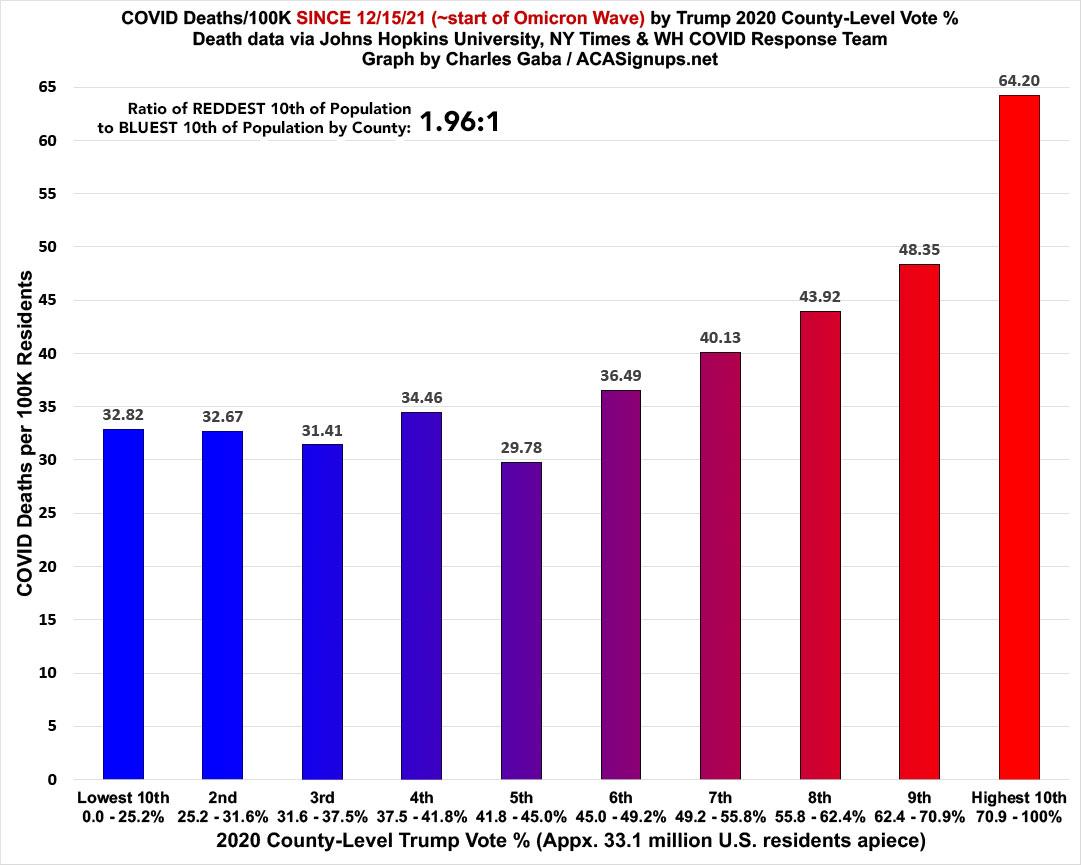 Case rates since mid-December are now 1.3x higher in the most-vaccinated counties...except that this is down from 2.4x higher seven weeks earlier: 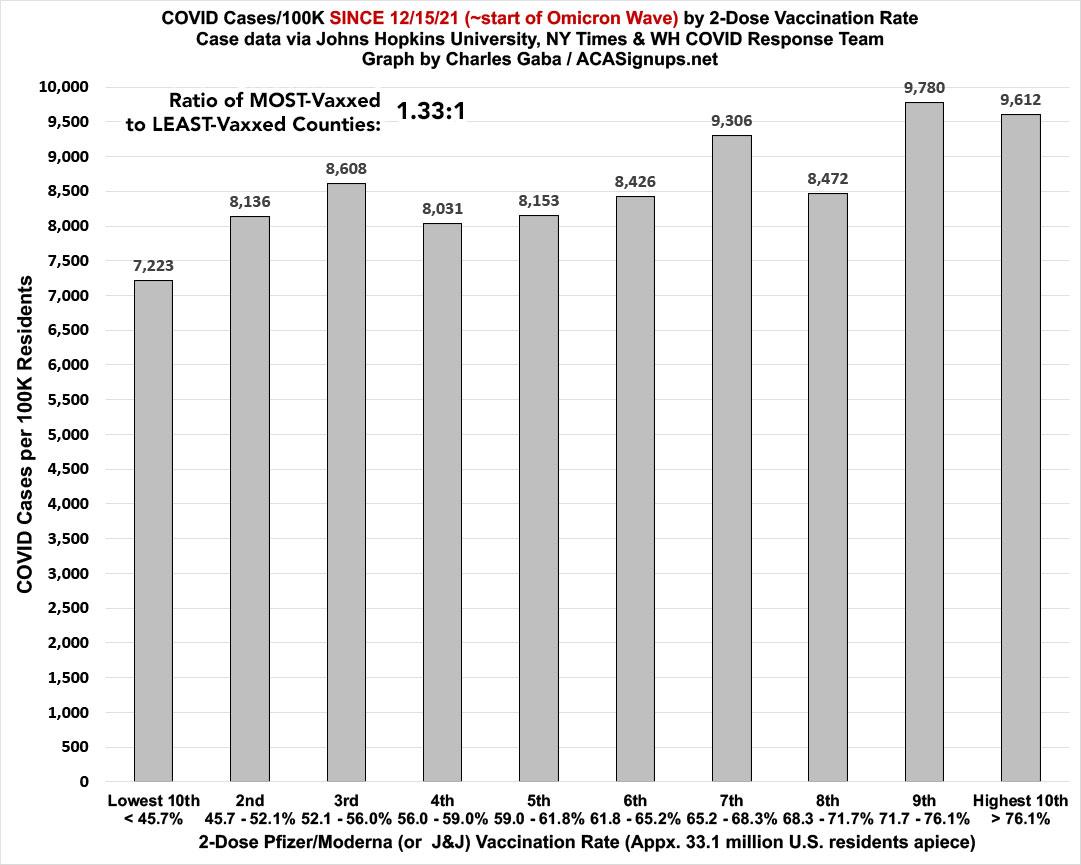 The death rate, however, is still 2.15x higher in the least-vaccinated decile than the most. This is down from 3.3x higher seven weeks ago, and way down from the 4.8x higher ratio during the Delta wave: 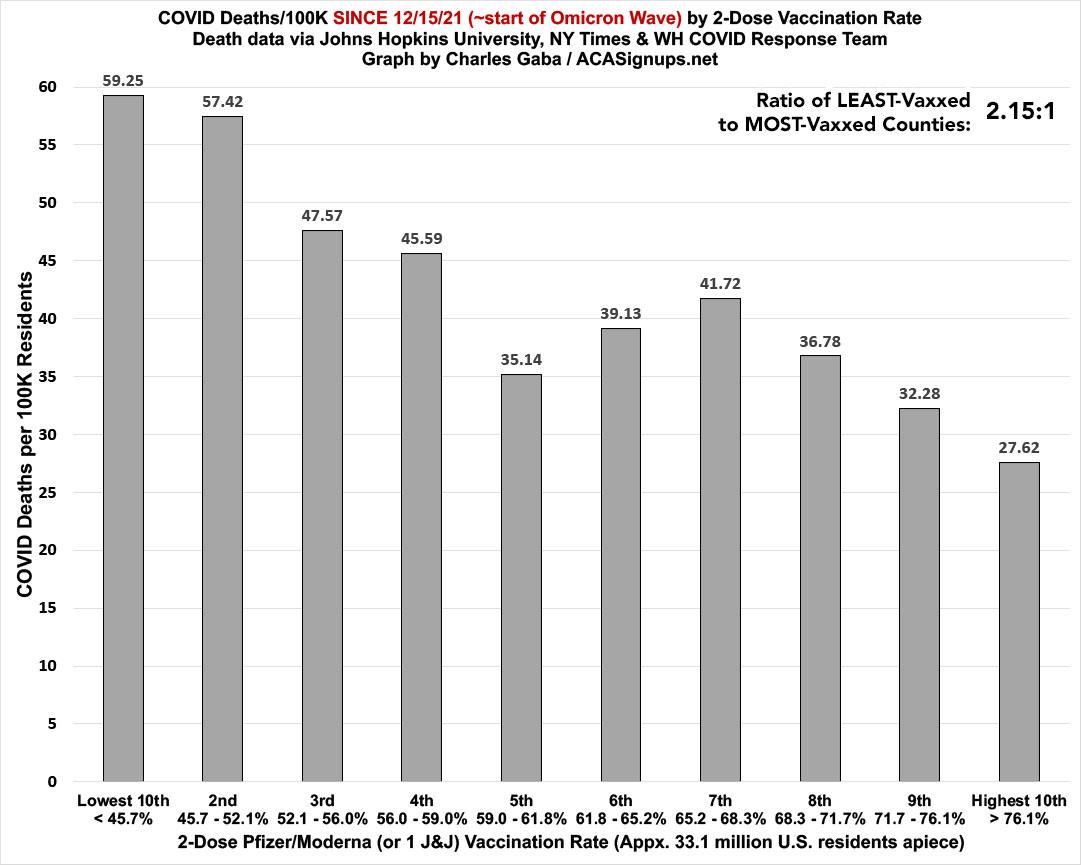 Here's what all four of the ratios above look like over time; the lines compare the Reddest vs. Bluest Deciles and the Least- vs. Most-Vaccinated Deciles. As you can see, the case rate ratios (at the bottom) are gradually moving back up to the 1:1 threshold again, while the death rate ratio has started to creep back up again. 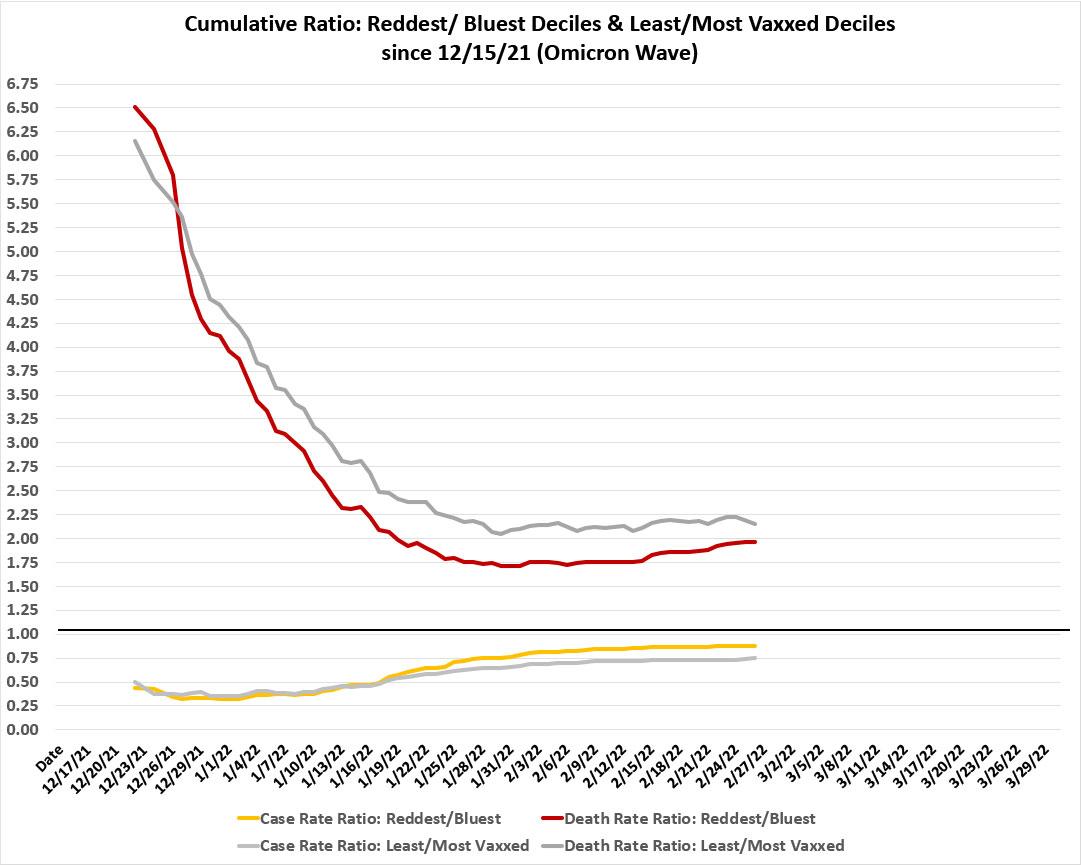 For comparison, here's what the Reddest/Bluest decile ratios look like over time if you start on May 1st, 2021...the point when pretty much all U.S. adults could theoretically have received their second COVID-19 vaccination shot (all adults became eligibie to get vaccinated in every state by early April; the second shot is given 3 weeks after the first). As you can see, both the case rate and death rate, which had been slightly higher in the Bluest decile until this point, quickly became higher in the Reddest decile and have stayed that way ever since.

Cumulatively, since May 1st, 2021, the death rate has run 3.1x higher in the Reddest decile than the Bluest decile. 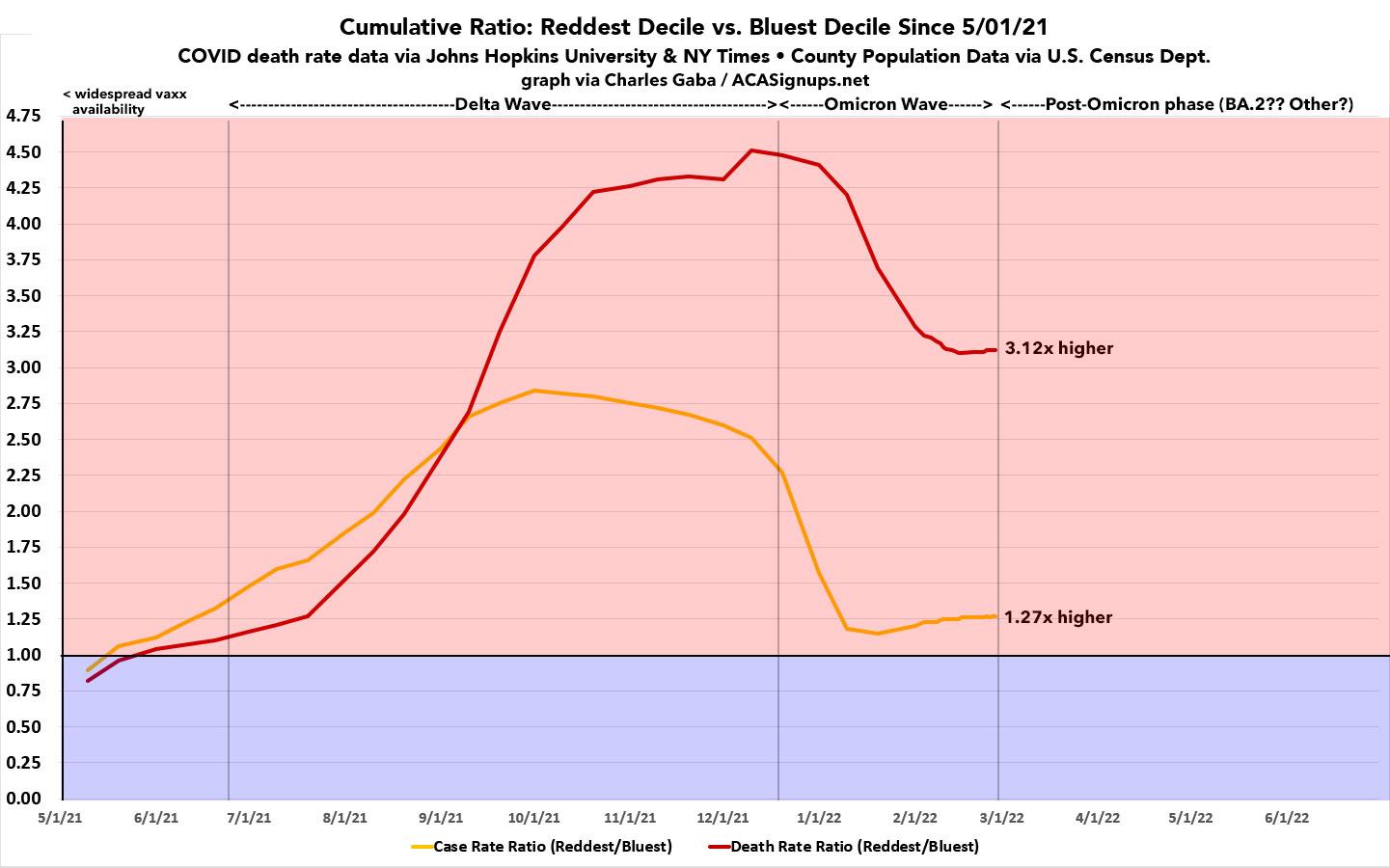 I've also added a new graph. This one shows the 10-day moving average of the ratio between the DAILY death rates in the reddest & bluest deciles, dating all the way back to January 1, 2021.