The Four Sons of CSR Loading: How millions can save thousands in Silver Load & Silver Switcharoo states 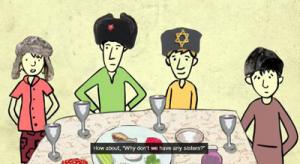 I've written a lot in recent weeks about the real world impact that Trump cutting off CSR reimbursement payments will have on 2018 premiums in various states depending on how they choose to load the additional cost. As I've noted repeatedly, there are basically four strategies they can take: They can assume the payments will continue; they can spread the load across all ACA-compliant policies; they can load all of the cost onto Silver plans only; or they can load all of the cost onto on-exchange Silver plans only, while also creating (if one doesn't exist) a special off-exchange-only Silver plan as a backstop for unsubsidized Silver enrollees (aka the "Silver Switcharoo").

As of this writing, most states have gone with the third or fourth of these options, but a handful are still pursuing the first or second.

A healthcare wonk-blogger colleague, Andrew Sprung of Xpostfactoid, described the four CSR loading strategies as The Four Sons from the Passover Seder:

*ATTENTION STATE INSURANCE REGULATORS: Please don't take offense; I understand that this is one hell of a messy situation and that there aren't any truly "good" options available to you. I'm not calling any of you "wicked" (with the possible exception of Ralph Hudgens of Georgia).

Way back in July I wrote up a detailed explainer of how the "Silver Switcharoo" gambit would work in theory. Now that it's no longer theoretical, I decided to take another shot at explaining it, this time using an actual spreadsheet to show how all four scenarios should work in the real world at three different income levels.

This is complicated stuff, but I've tried to streamline/simplify it as much as possible, so here's the ground rules:

OK, got all that? Let's begin:

First we have to check the baseline: How much is this individual paying for their policy this year?

At $18,000/year, the enrollee earns around 150% of the Federal Poverty Line ($12,060). That means as long as they enroll on the ACA exchange, the difference between the benchmark Silver premium ($450/month, or $5,400/year) and 4.08% of their income ($734/year) is how much they receive in tax credits this year: $4,666 total, or $389 per month. They apply that to whichever on-exchange policy they wish. They could get a Bronze plan for free (the tax credits are higher than the premium, but $0/month is as low as you can go)...but it would include a massive $6,000 deductible, whereas thanks to being eligible for CSR, the $3,000 Silver deductible is reduced to almost nothing, making Silver at just $61/month a much better value for them. Neither Gold nor Bronze makes any sense whatsoever.

At $54,000/year, the enrollee earns $450% FPL. They don't qualify for any financial assistance, so it's irrelevant what percent of their income the benchmark is, and all being equal it also doesn't really matter whether they enroll on or off exchange, since they're paying full price no matter what.

For purposes of this exercise, I'm also going to assume that the enrollee has chosen a Silver policy for 2017.

Now we get to the point of this article: HOW MUCH WILL THEY HAVE TO PAY IN 2018?

Well, that depends on what state they live in:

According to my data, on average nationally, unsubsidized 2018 individual market rates would have gone up around 15% assuming every carrier in every state assumed CSR payments would be made for 2018. That amounts to roughly $12.2 million in additional expenses total for all 16,000 enrollees as a whole (that is, around $93.8 million total in 2018 vs. $81.5 million in 2017).

The rate increases would vary from plan to plan and metal level to metal level, but again, to keep things simple, let's assume that if priced on the assumption that CSR payments would be made, each metal level would be bumped up by exactly 15%.

If so, that would give us the following:

The annual benchmark plan has gone up from $5,400/year to $6,210/year. The enrollee's income is expected to stay the same, so their tax credits should increase by around $810/year as well, or about $68/month.

At $18,000/year, the enrollee now receives about $456/month in tax credits. Again, they can get the Bronze plan for nothing...but if they stick with the Silver plan, they'll pay exactly what they did this year: $62/month, and the deductible will be pretty much wiped out. They should stay put.

At $36,000/year, they receive $227/month. Again, they'll pay exactly the same for the same plan ($291/mo)...but notice that if they really want to get the Bronze plan instead, it now costs $23/month less ($118/mo) than it did this year ($141/mo). In most cases they'll probably want to stick with Silver, but Bronze just became a bit more tempting, since it would cost $276 less for the year. Gold and Platinum still make little sense here.

At $54,000/year...well, they just saw their rates increase by 15% no matter what. If they want to keep their premiums at or below $450/month, they'll have to downgrade to the Bronze plan and take the bigger deductible.

HOWEVER, this doesn't appear to be in the cards. One way or the other, just about every carrier in just about every state is instead baking the CSR surcharge into their 2018 pricing somewhere...and that's where things start to get either interesting or ugly, depending on your point of view:

For all three of the "CSR Load" strategies, around $12,000,000 has to be added somewhere into the premiums...the only question is how it's distributed. Adding $12 million to the total just happens to bring the overall, collective premium increases up to just shy of 30%...which, by no coincidence, just happens to be exactly what I estimate the full CSR load rate increases to average nationally.

On the surface, spreading it evenly across all metal levels, both on and off the exchange, would seem to be the most "equitable" solution. Just divide $12 million by 16,000 enrollees to get $750...tack an extra $750 onto everyone's premiums and call it a day, right? Let's see what that looks like:

As you can see, the unsubsidized rate hikes for every metal level goes up dramatically, by anywhere from 23.3% to 25.8% depending on the metal level, averaging 29.7% overall.

Both the $18,000 and $36,000 enrollees see their premiums rise still further to match the additional $750, meaning they still pay the same amounts year over year for Silver ($61 and $291 respectively), and at $36K they can still get a Bronze for less than this year.

However, the $54,000 enrollee has a serious problem. He's paying $450 for a Silver plan this year...but next year everything is going up substantially. It doesn't matter whether he goes on exchange or off; his Silver plan sjot up by 29%, and if he couldn't afford Gold or Platinum before he sure as hell can't now. His only viable option is to downgrade to Bronze to save $42/month...but that's small comfort since his deductible just doulbed from $3,000 to $6,000.

Most states have realized that the "Broad Load" strategy is bad because it hurts unsubsidized enrollees no matter what; there's nowhere for them to go if they want to avoid the CSR surgcharge. Instead, about half the states have chosen instad to go with "Silver Loading": They push the full amount of the rate hike onto Silver plans only, leaving Bronze, Gold and Platinum untouched (well, OK, they're still increasing by the "normal" 15%, but nothing beyond that). Here's what that looks like:

Meanwhile, the $54,000 enrollee is actually hurt even more if they stick with their Silver plan, which is bad...but at least they have better upgrade/downgrade options than the "Broad Load" offers them.

Under "Broad Load", they'd have to pay either $408 for Bronze or $753 for Gold...neither one is a very good option. However, under Silver Load, the Bronze and Gold cost $345 or $690...the exact same price it would cost if CSRs were being paid in the first place.

Again, I'm not saying anyone should be jumping for joy at these rates, but it's making the best out of a bad situation. "Silver Loading" tries to minimize the pain, with the advantage of helping out subsidized enrollees even more.

However, there's one more option available. This is a spin on "Silver Loading", and while it's a bit more complicated, once you understand it you'll see why at least 13 states have wisely chosen this route:

The "Silver Switcharoo" uses the same premise as Silver Loading, but concentrates it even further. Instead of loading it onto all Silver plans, it crams 100% of the Silver load onto Silver plans available on-exchange only. This has the effect of jacking up unsubsidized on-exchange Silver rates even more...but thanks to an important technicality, this is actually a good thing.

First of all, by raising rates on on-exchange Silver even higher (40.5%, as opposed to 37.9% under Silver Load or 28.9% under Broad Load), this makes the tax credit formula work even better in lower income enrollees' favor: The $36K enrollee can now get a Bronze plan for nearly nothing ($3/month!), or they can upgrade to a Gold plan for a mere $348/month. That's just $58/month more than they're paying for their Silver plan now...less than $700 more to drop their deductible by $2,000. UPGRADING TO GOLD IS THE WAY TO GO FOR THIS ENROLLEE.

In fact, there are some states and scenarios where the Gold plan could end up costing less than Silver, especially for subsidized enrollees earning between 250% - 400% FPL ($30K - $48K for a single adult).

But this leaves the unsubsidized enrollee. If they stick with their current Silver plan, at full price they're really screwed: A 40.5% price hike to $632/month. Ouch!

Like Silver Loading, they could upgrade or downgrade to Gold or Bronze to limit the damage, but what if they really want to keep their Silver plan instead? Here's where the "Switcharoo" part comes in.

Thanks to CSRs being limited to on-exchange Silver plans, this frees up the carrier to also create (or actively promote, if it already exists) an off-exchange ONLY Silver plan which doesn't include the CSR surcharge.

This off-exchange Silver plan will only include the "normal" 15% hike, which means instead of paying $632/month, switching to it means the unsubsidized enrollee only has to pay $518/month...the exact same price they'd have to pay if the CSRs had been paid in the first place!

Once again, I'm not saying that they should be happy about paying 11.5% of their income for their premiums, and lord knows it's inconvenient and irritating to have to switch plans, especially when the "new" plan is essentially identical to the old one...but the goal here is to limit/mitigate the damage as much as possible, and "Silver Switcharoo" is the best option available to do so:

I know it's too late for every state should go this route, but Maryland's Insurance Commissioner is holding a special Public Meeting on Monday morning. Anyone who lives in MD should contact the state Insurance Dept. and strongly urge them to utilize the full Silver Switcharoo strategy if at all possible. If that's not feasible for some technical reason, at the very least they should go with the Silver Load strategy.

UPDATE: I almost forgot! Here's three bar graphs which demonstrate what the 2018 policy premiums above would look like under all four scenarios for all three income levels to help visualize both the dilemma and the potential upside for each: 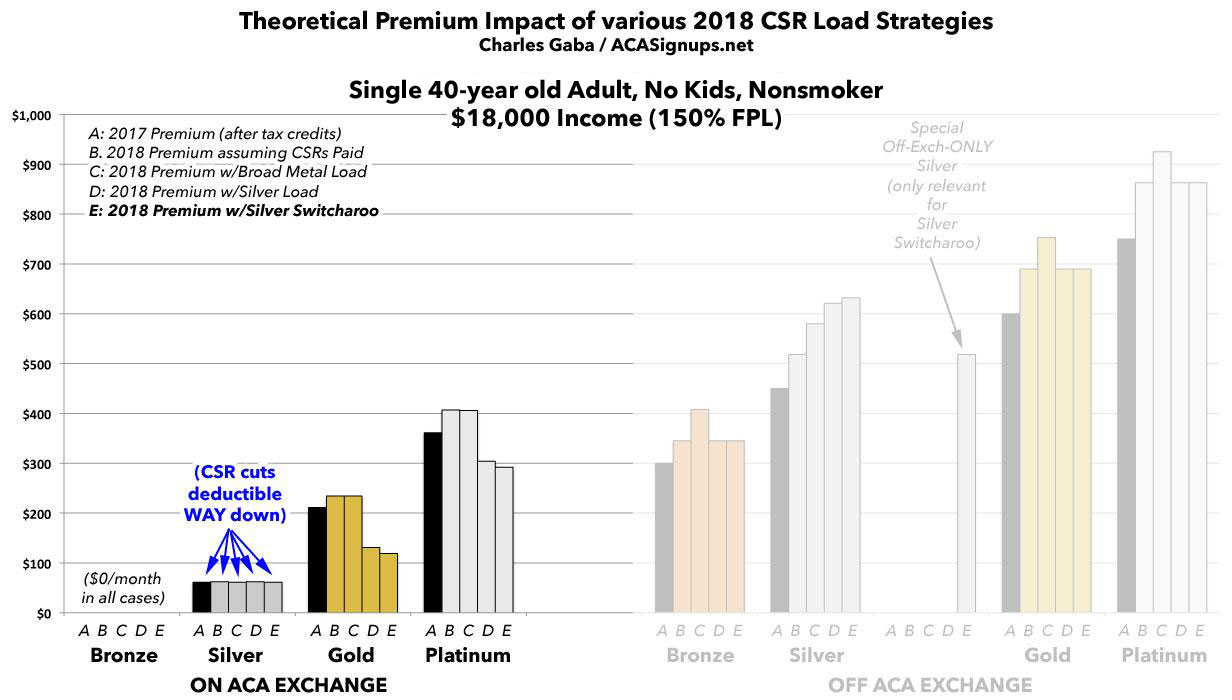 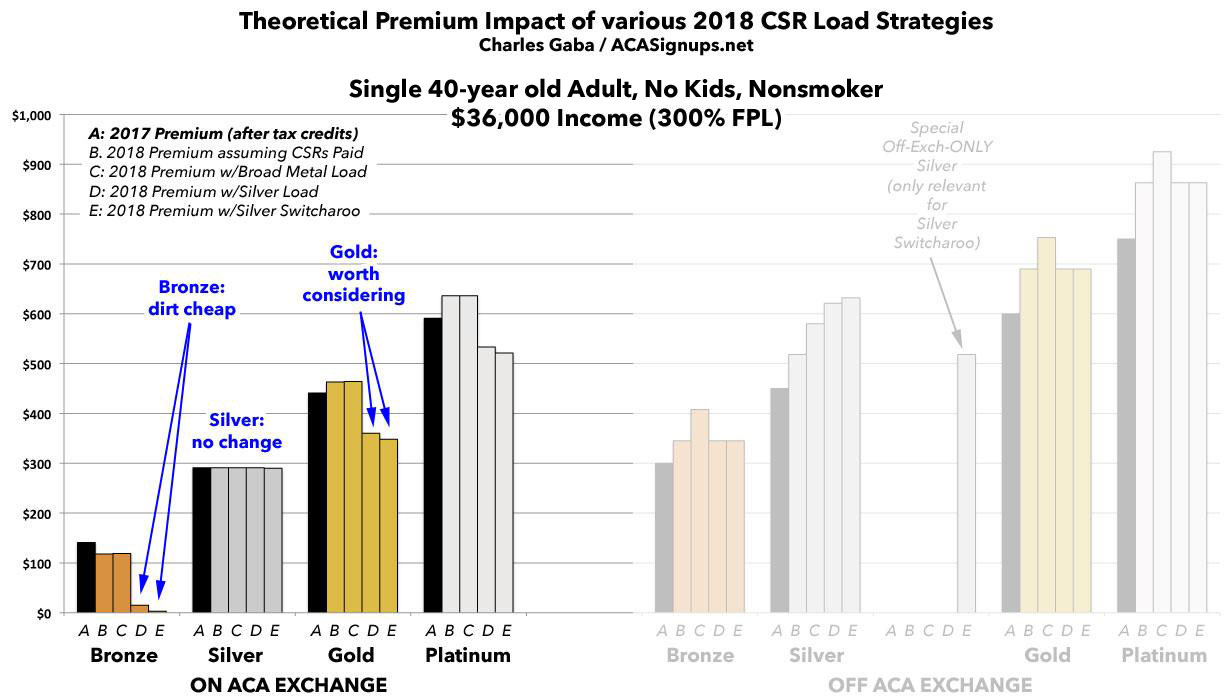 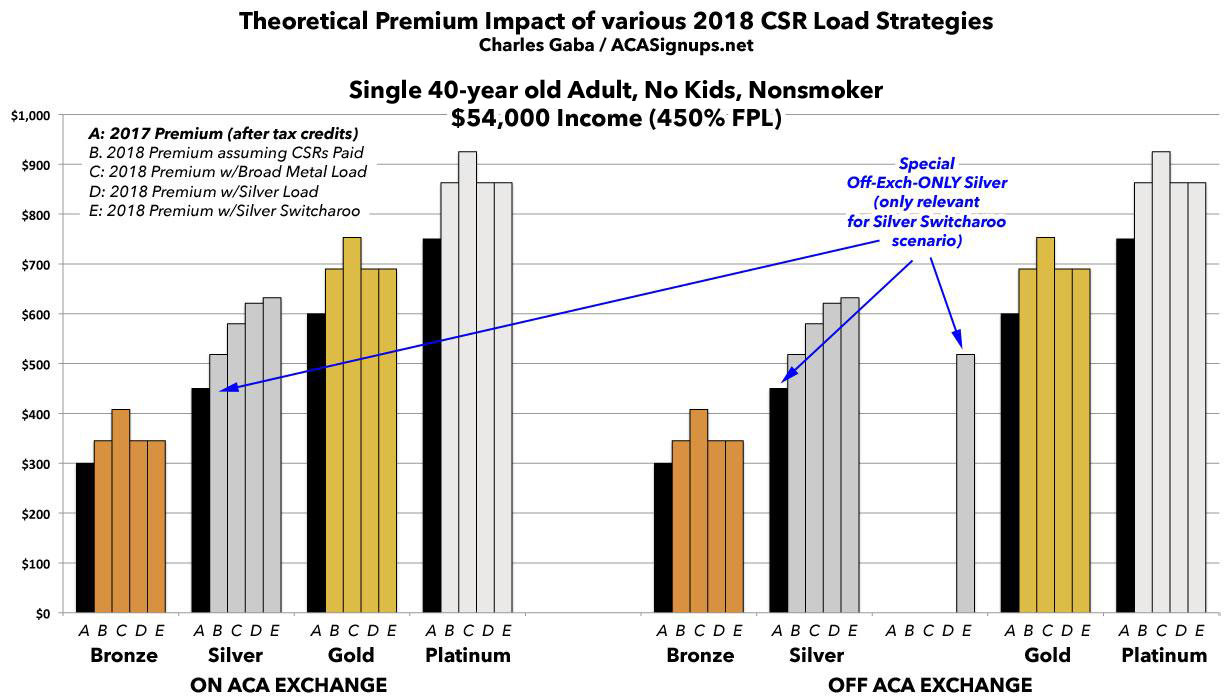