I ran the preliminary, requested 2022 rate increase numbers for Arkansas back in August. The Arkansas Insurance Dept. is pretty good about laying out the requested rates and covered lives in a straightforward way, so it seemed pretty clear cut at the time.

For the approved rate changes, however, things get a bit weirder. The AR DOI hasn't posted the approved filings publicly yet, but the Arkansas SERFF database shows the status for every carrier on both the individual & small group markets as being "Closed - Approved" (which makes sense given that the 2022 Open Enrollment Period starts in just 5 days), and when I check the handy "Plain Language Summary" forms for each carrier, they show lower rates than the original requested for 3 of the 5 individual market carriers (Oscar is new this year) and for 1 of the 7 small group market carriers. All of this certainly seems to indicate that those are the final/approved rates.

Based on those numbers, it looks like Arkansas' indy market plans are going up slightly less overall than the preliminary requests: 4.4% instead of 6.5% on average. Small group rates are going up nearly the same (4.0% vs. 4.1% requested).

However, there's two other things which caught my eye as well: According to the AR DOI website, Celtic's rate changes will impact 75,343 people, while QCA will impact 42,518... 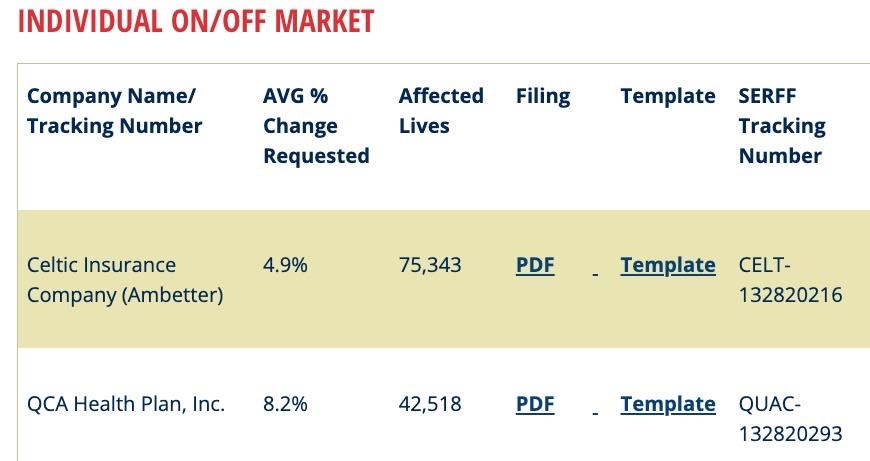 ...but when you look at the Plain Language Summary for each, it's clear that those numbers represent the number of policyholders, not covered lives, which are slightly higher in both cases (the sameis true of all 5 indy market carriers, in fact):

Across all five carriers, the statewide individual market enrollment total is actually around 351,000, vs. the 328,000 indicated by the numbers on the DOI website: 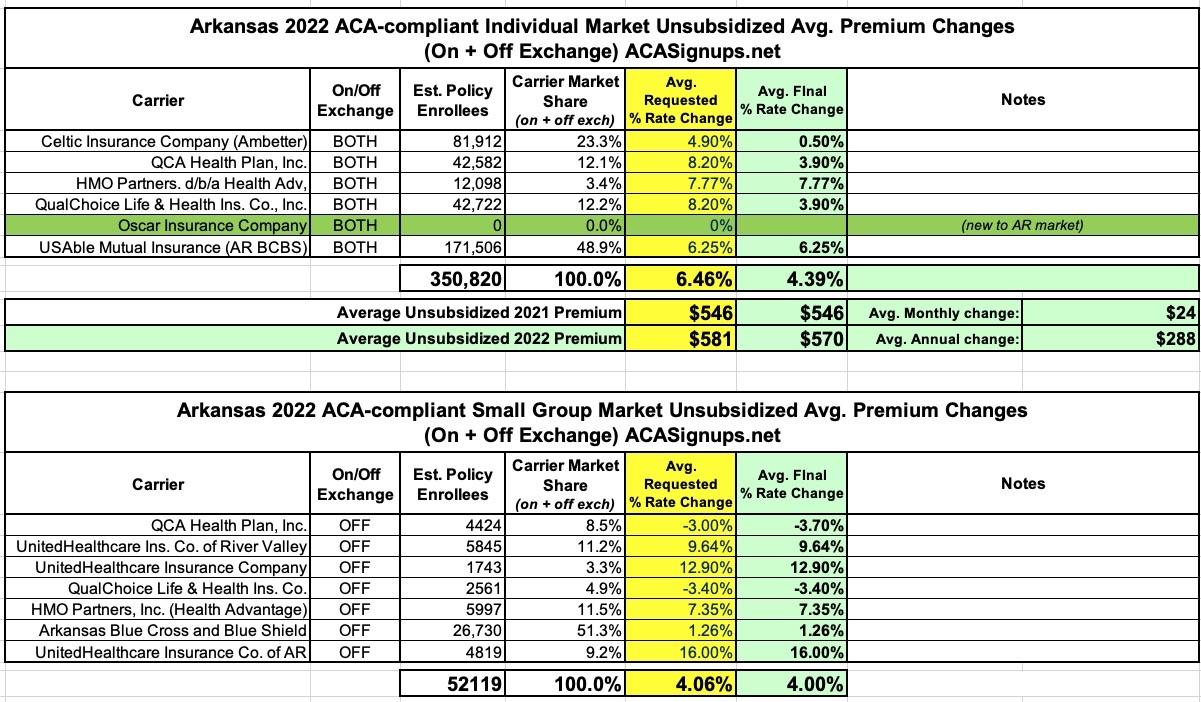 What's even odder about the "preliminary vs. final" rates is that the PDFs directly linked to next to the "preliminary" rates on the DOI page show the reduced rate changes as being "closed/approved"...back in August. Huh. Not sure what to make of that, but whatever.

In any event, the corrected enrollment number (around 23,000 higher than I thought) also partly resolves a problem I noted in August:

Arkansas' 328.5K ACA enrollee total is also noteworthy because the state supposedly had around 317,000 residents enrolled in the state's "Medicaid Private Option" plans in March 2021; these are actually ACA individual market plans with nearly all costs covered by a combination of federal & state Medicaid funds plus some wraparound state funding. If you subtract that total out it only leaves around 11.5K actual on-exchange QHP enrollees...except Arkansas actually had over 60,000 enrolled in exchange QHPs in February, so there's a ~48.7K discrepancy. Not sure what that's about.

This leaves around 33,800 QHPs. Still less than the 60,000 figure, but it reduces the discrepancy somewhat, anyway.