UPDATED x6: What the heck is going on with "Freedom Life Insurance Co."? 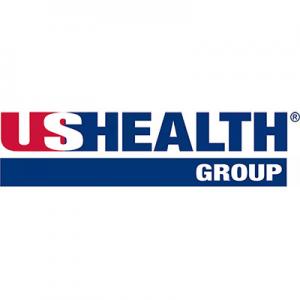 Do me a favor: Take a look through all 20 or so of the 2017 Rate Request entries I've put together. Notice anything? Here, I'll make it easier:

As you can see, in a few cases they seem to go by an alias ("National Foundation" or "Enterprise"), but the wording of the filing letter is pretty much identical in every state. In 5 of the 8 states, they're requesting the exact same 17.37% increase, and in 7 of the 8 they don't have a single person actually enrolled.

Question: How do you estimate how much you need to increase your rates if no one is even enrolled in your policies?

Bigger question: How do you operate a national health insurance carrier (remember, that's 8 states out of 20...they could potentially pop up in up to 30 others yet) with a grand total of 8 people enrolled in your policies? I assume that they have other divisions (ESI? Managed Medicare? etc) which actually have a substantial amount of revenue, but this just seems weird to me.

Out of curiosity, I ran a search for "Freedom Life Insurance Co." and found them listed under a whole mess of different names: "Enterprise Life Insurance". "National Foundation". "US Health Group". "Homeland Healthcare". They seem to pop up an awful lot under "consumer complaint" sites, although I suppose that's probably true of lots of insurance companies.

Anyway, it's kind of weird. I'm sure someone who works in the industry can explain what's going on here, but for the moment it's a head scratcher.

UPDATE: Wow...this was unexpected. Anyone who knows who Wendell Potter is will agree that when it comes to all things healthcare insurance related, if he says it's weird...believe me, it's weird:

@charles_gaba now this is weird

Furthermore, check out commenter "M E" below, who claims:

I'm an agent in one of your already listed states. I've never heard of them, and I get called or emailed all the time about selling new/different carriers. Sounds very suspicious, honestly.

UPDATE x2: OK, a Google search shows that even their website isn't under that name; it looks like it's under "USHealthGroup.com" or, alternately, "USHealthFamily.com", a separate website, both of which claim to be underwritten by "Freedom Life Insurance Company of America" and "National Foundation Life Insurance Company".

They seem to specialize in short-term insurance and the dreaded "mini-meds" (aka "junk insurance" in the pre-ACA days), neither of which qualify for ACA-compliance and certainly don't qualify to be ACA exchange QHPs.

UPDATE x3: OK, I think I see where this is heading.

Thanks to @Practicing for digging up the following links:

First, from an Insurance-Forums.net discussion from back in 2011 (I've cleaned up the discussion to avoid redundancies):

Today, a health insurance client forwarded to me a proposal from Freedom Life (US Health Group). I recognized the plan because I used to sell Freedom Life before 2007.

What amazed me is that the policy has a $5,000,000 life-time cap. Upon closer inspection of the 28 page brochure, I never found the words "major medical". There was a statement that said, "This specialty plan will not subject you to the limitations of Health Reform laws" (paraphrased).

So it appears that by refusing the remove the $5,000,000 lifetime cap, Freedom Life avoided having their plans and company subject to every aspect of HealthCare Reform, including the MLR, Preventive Care, etc.. It is essentially the same plan they've sold for the past 10+ years, but can't legally be called "Major Medical". Very SNEAKY of them.

At $361 @ month for a 44 year-old smoker ($6,000 deductible w/ 70-30 of $20,000 and Critical Illness/Accident deductible elimination riders) it was quite expensive, but the brochure was laid out so well with real life stories and examples that the client was impressed enough to consider dumping his $329 a month $1,500 deductible HSA...thinking that the Freedom Life was better! All the more reason why our expertise is so needed during this crazy Health Insurance Reform era we're entering.
-Allen

I know I don't sell health but are you telling me the client voluntarily paid $32 more per month, increased his deductible $4500 as well as having an additional $6000 of coinsurance because of critical illness and accident elimination riders?

He ALMOST did, because the brochure was so eye-grabbing. I found out that the agent who pitched the Freedom Life proposal is making his rounds with local business owners, like my client. Apparently he's doing a brisk business just walking in and dropping off this brochure.

I guess it's the world we live in.. Flash and Sizzle sells.

Later in the thread there's a link (again, from 2011) to "freedomlife.net/Brochures.aspx"...which, if you go there now, goes to a broken link and a dead domain name.

Second, check out class action legal judgment out of Florida from 2004:

FREEDOM LIFE INSURANCE COMPANY OF AMERICA, a Texas corporation, Appellant, v. Kim WALLANT and Louis Borek, on behalf of themselves and all other similarly situated, Appellees.  •  Decided: December 29, 2004

...Wallant and Borek purchased GPPO(A) health insurance policies from Freedom Life under an out-of-state group health insurance program, administered by CIA, under Florida Statutes section 627.6515. Both later obtained coverage through other insurance plans due to their dissatisfaction with Freedom Life. In fact, the vast majority of GPPO(A) policyholders, all but 375 of 7,836, are no longer insured by Freedom Life.

Wallant, as a purported class representative, sued Freedom Life due to denied and delayed claims under her policy. Borek later joined the suit as a class representative.   The class as defined by the representatives included:  “All insured persons who were issued illegal certificates that did not comport with the clear requirements of Fla. Stat. § 627.6515(2) and whose certificates contained adhesion language pertaining to dispute resolution that was both procedurally and substantively unconscionable for five(5) years prior to the filing of the initial complaint.”   The representatives also alleged that Freedom Life improperly denies and delays claims in contravention of Florida law and the terms of the policies.

Of course, none of this proves that there's anything especially wrong with Freedom Life; I imagine that most insurance carriers have been sued for one reason or another, and the above links are 5 and 12 years old respectively. I'm not accusing Freedom Life of anything here; let's just say that I don't plan on using them as my health insurance carrier any time in the near future.

Number of enrollees? 2 people, 1 person and an unknown number for Nevada, but it's pretty clear it's in the single digits at most.

All told, that's at least 11 states, with a grand total of 11 enrollees. 7 out of 11 states are asking for exactly 17.37% hikes. In every case, the actual Actuarial Memorandum is Redacted.

UPDATE x5: Hey, lookee there! Louisiana joins the crowd with filings for both "Freedom Life" and "Enterprise Life", both with exactly 1 enrollee, both asking for exactly 17.37% increases.

That brings the tally to at least 12 states, a total of 13 enrollees, with 8 of the 12 states requesting exactly a 17.37% increase. As for the states requesting 9.95% or 9.98% hikes, it's worth noting that in some states, keeping it below the 10% threshold prevents them from having to face a full review/approval process. Hmmmmm....

UPDATE x6: Via an anonymous source, behold the wonder that is the Freedom Life Insurance Co. organizational chart!

Yes, that's right...if you peel back enough layers of the onion, it turns out the entire operation is actually owned by...Credit Suisse Group, the Swiss financial services holding company??? 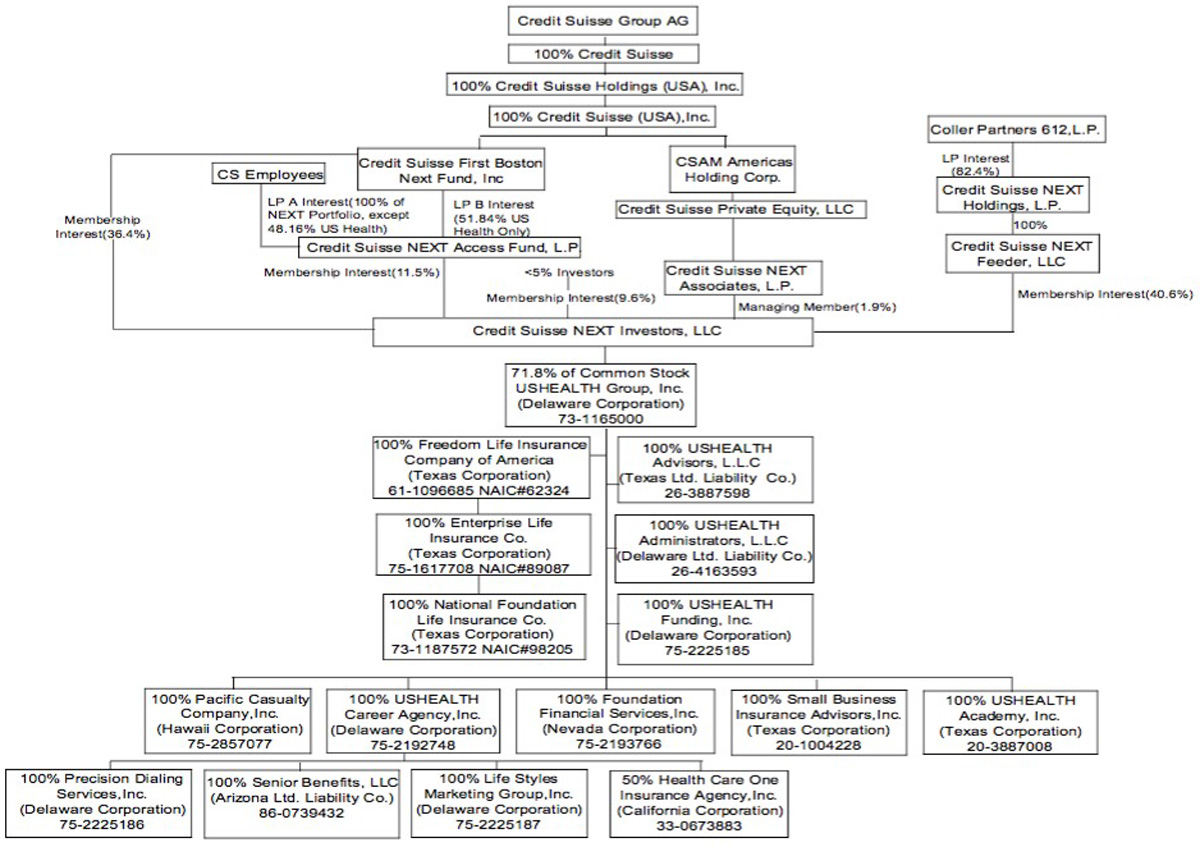