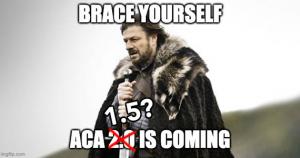 The American Rescue Plan checked off the first two items above...but only for a 2-year period, including the current one; at the moment, the ACA subsidy formula, including the Subsidy Cliff, are set to return starting January 1, 2023 unless the ARP's enhancements are extended beyond then.

The Family Glitch (#3) looks like it might be resolved via regulatory changes at the IRS and HHS Dept...although I haven't heard an update on the status of that since April.

In addition, there were several important Medicare-related provisions which progressives have been clamouring for:

As for how to pay for it all, a MAJOR way of doing so would be to also pass H.R.3, which would allow the federal government to negotiate prescription drug prices for Medicare. This is estimated to save up to $450 billion over the next decade, which would instead be used to partially/fully fund a big chunk of the items above.

So, where do things stand an all of these wish list improvements today? Well, according to Alice Miranda Ollstein & Rachel Roubein of Politico, it's looking kind of meh for a lot of them:

To squeeze as many of their priorities as possible in a budget resolution that’s expected right after the bipartisan infrastructure package, lawmakers are discussing making some of the new health spending temporary, similar to the two-year boost to Obamacare subsidies they wrapped into Democrats’ coronavirus relief package in March.

The move could allow them to claim credit for steps such as extending Medicaid coverage to millions of low-income people in red states and extending the two years of Obamacare subsidies they enacted in March without running afoul of congressional scorekeepers.

But a drug pricing plan that lawmakers are counting on to pay for a big chunk of the health investments is nowhere close to ready. That leaves Democrats uncertain of how much money they’ll have to invest in new programs.

“We’re not going to be able to do everything we want,” said Sen. Chris Murphy (D-Conn). “There’s not a simple answer. We’re going to have limited resources, and we’ll have to make different decisions on whether we do programs at lower levels for longer periods of time or higher levels for short periods of time. It’s important to get it right.”

The article goes on to note that some items on the list above have already been given the boot, such as lowering the age of Medicare eligibility (which, to be honest, is the lowest-priority item of these on my list as well, especially if the enhanced ACA subsidies are kept in place permanently anyway).

In my view this is actually seven items, not five, if you separate out Medicare dental, vision and hearing benefits; it also includes one not on my list above, Medicaid in-home care, which I agree is important as well.

Chris Meekins, an analyst for Raymond James, wrote in a note to clients Thursday that while the budget currently plans to spend $600 billion to $750 billion on health investments, he estimates the actual total will be closer to $400 billion to $450 billion. He cautioned that "significant savings will be required either way, with payfors for this bill in flux."

Progressives say they’re pushing Democratic leadership and the White House to favor two- or three-year authorizations instead of cutting some health items altogether or making the programs skimpier.

Hmmmm...I'm honestly not sure where I stand on this question. I think it depends on the benefit itself. If the choice was between adding dental, vision and hearing (but only for 3 years instead of 10) or adding dental coverage only, but doing so permanently, which is the better way to go? On the one hand, it's a lot harder to take away a benefit once it's been given; on the other hand, it would also be nice not to have that expiration date constantly looming over your shoulder to be used as a hostage at a later date, the way that CHIP and Community Health Center funding has been over the years.

IF they end up going with the second route (making the extra benefits less generous but locking them in permanently), I could see something like the following:

It's also important to keep in mind that ANY of these provisions being passed and signed into law would still represent significant improvements over the status quo. With a 50/50 Senate that includes Joe Manchin, Kyrsten Sinema and the filibuster, getting even one or two of them over the finish line would still be an impressive accomplishment.

Having said that, if only a few make it through the final sausage-making grinder intact, I'd have to call it more of an "ACA 1.5" upgrade than ACA 2.0, if you get my meaning: Important and long overdue but not earth-shattering.

FAMILIES: the major families plan programs proposed by Biden are funded in the HELP and Finance instructions.

HEALTHCARE: builds on Democrats’ goal of providing universal health care to all Americans in the Finance and HELP instructions.