The Racial Factor: There's 77 counties which are deep blue but also low-vaxx. Guess what they have in common?

Yesterday I posted a completely updated county-level look at where COVID-19 vaccinations stand based on the 2020 Presidential election results.

As I've been noting for months (and as the mainstream press has finally started picking up on), while there are several factors explaining why so many people haven't gotten vaccinated yet, the single biggest determining factor is their political lean and, even more specifically, who they voted for President last fall.

However, there are some outliers, as you would expect when you're looking at a nation of over 330 million people.

According to the latest data, if you take the original "every county" graph... 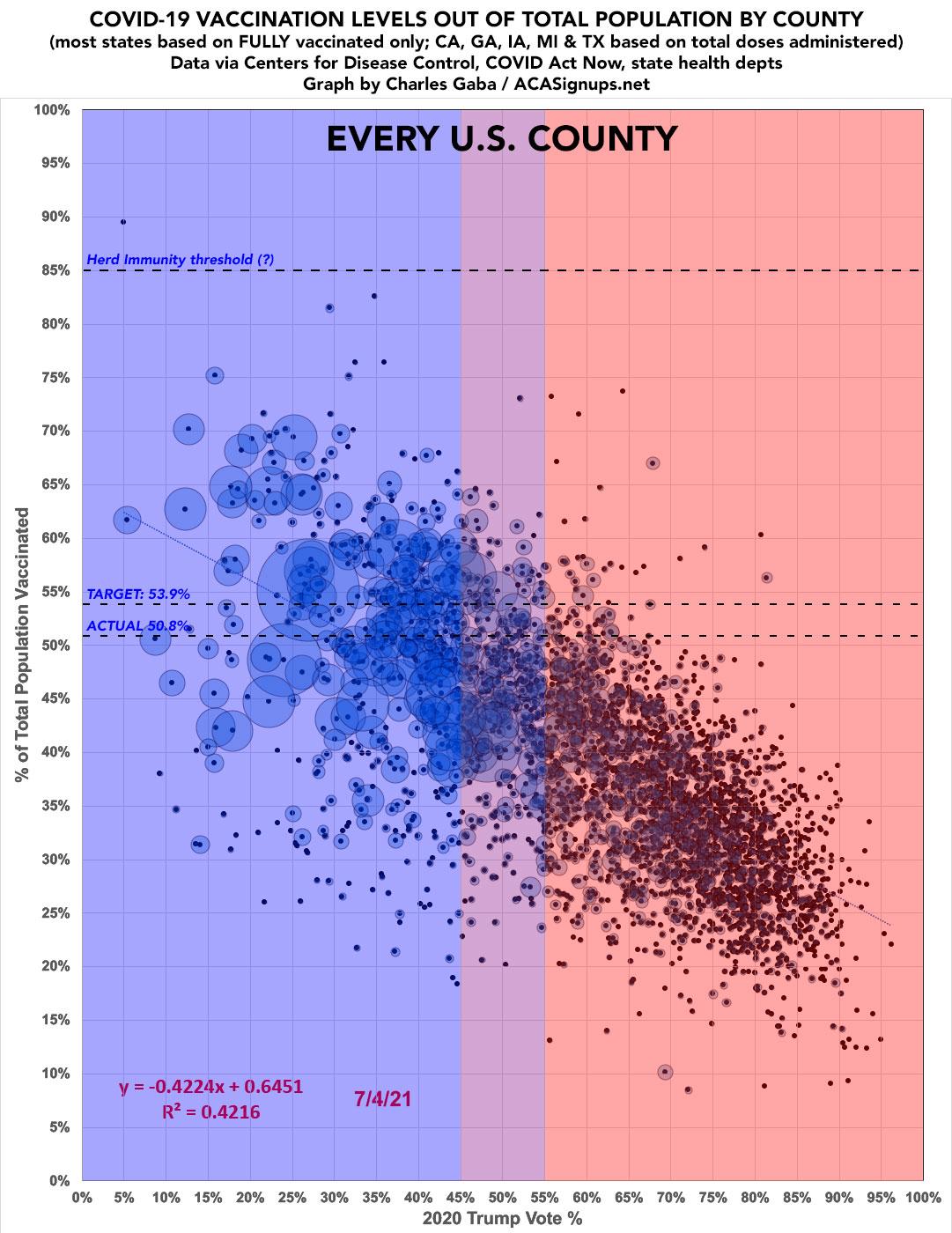 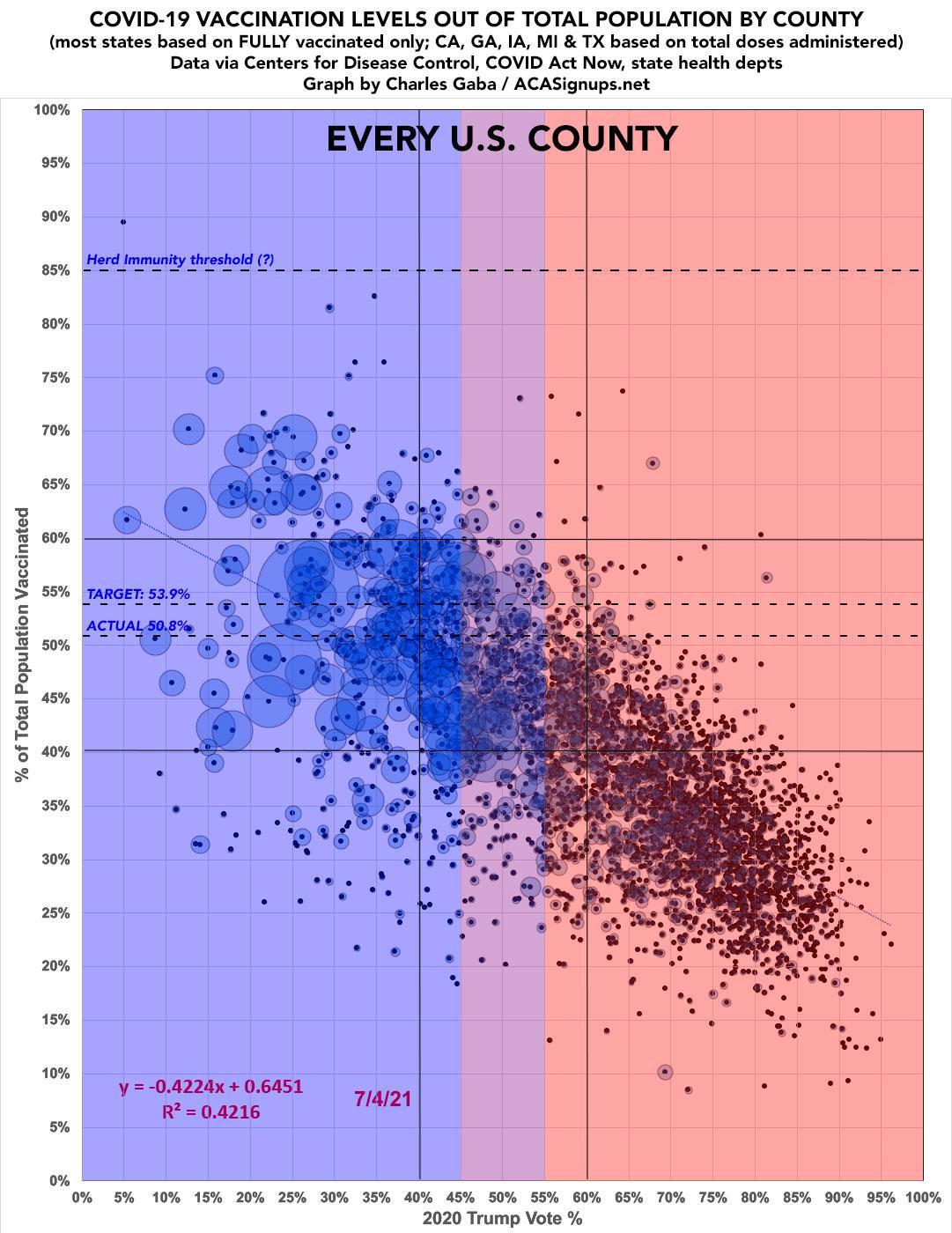 ...you get the following (total populations rounded off): 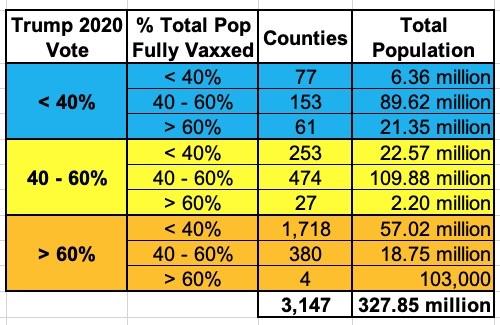 If you simplify this further, you get four noteworthy sections: 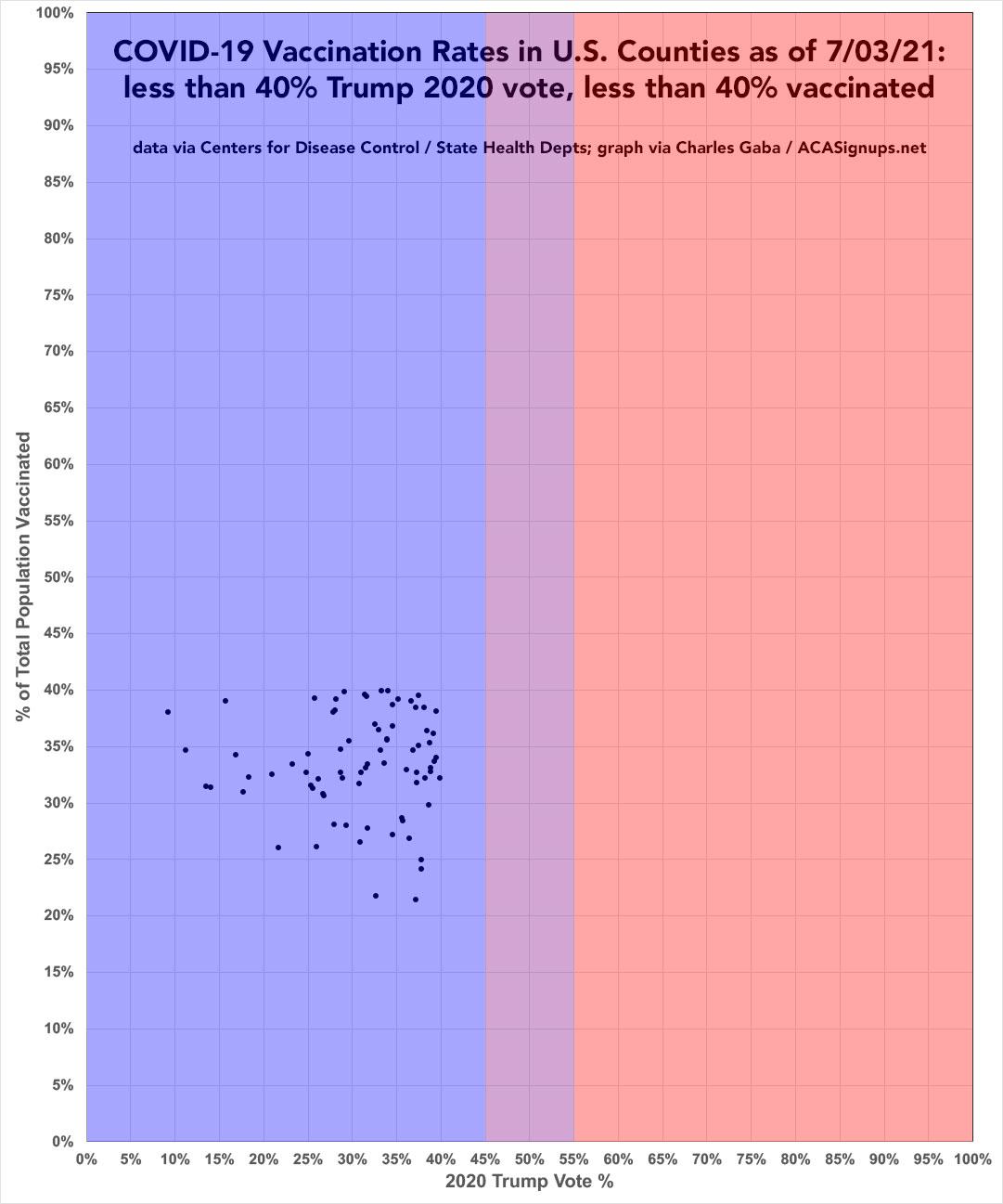 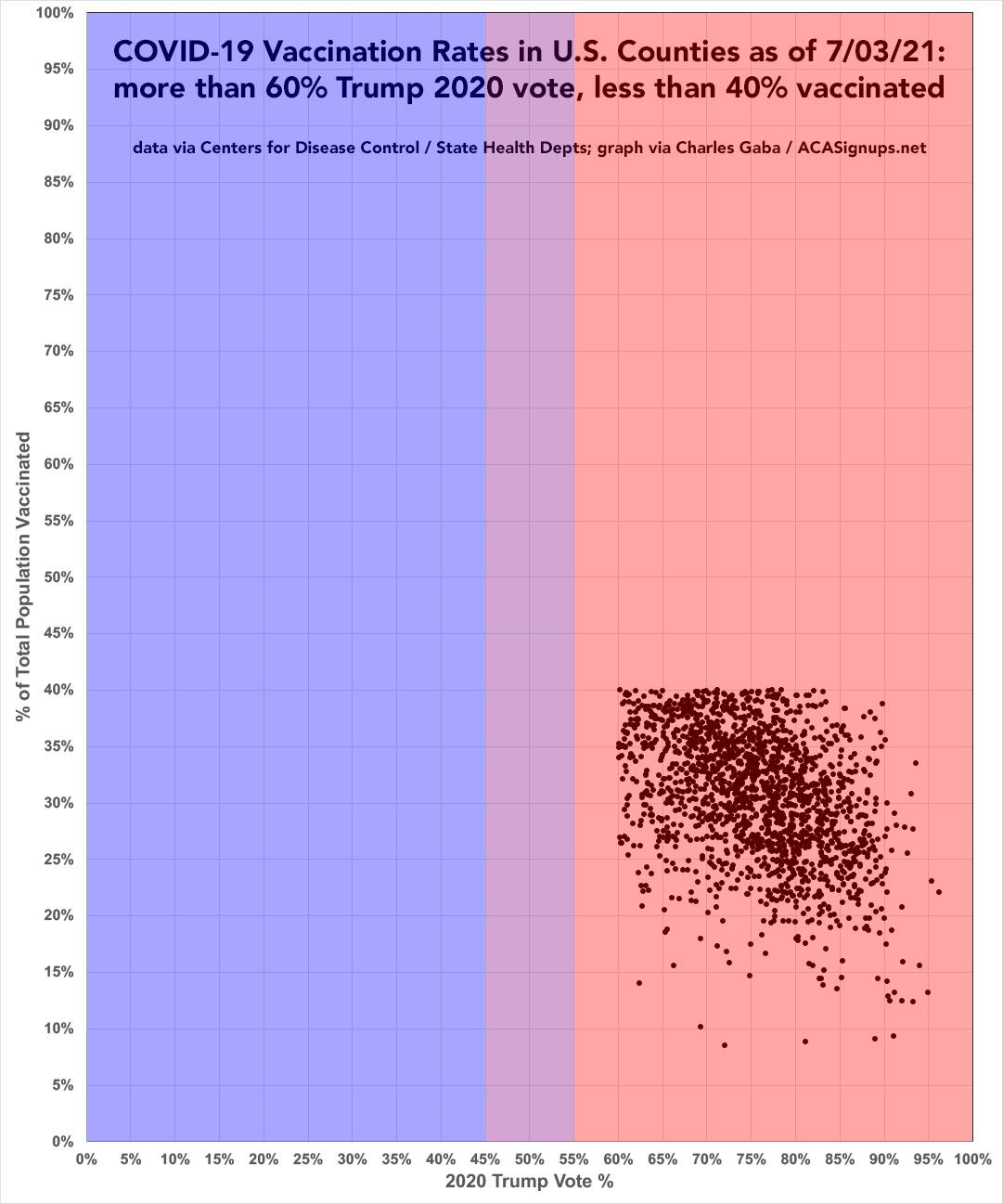 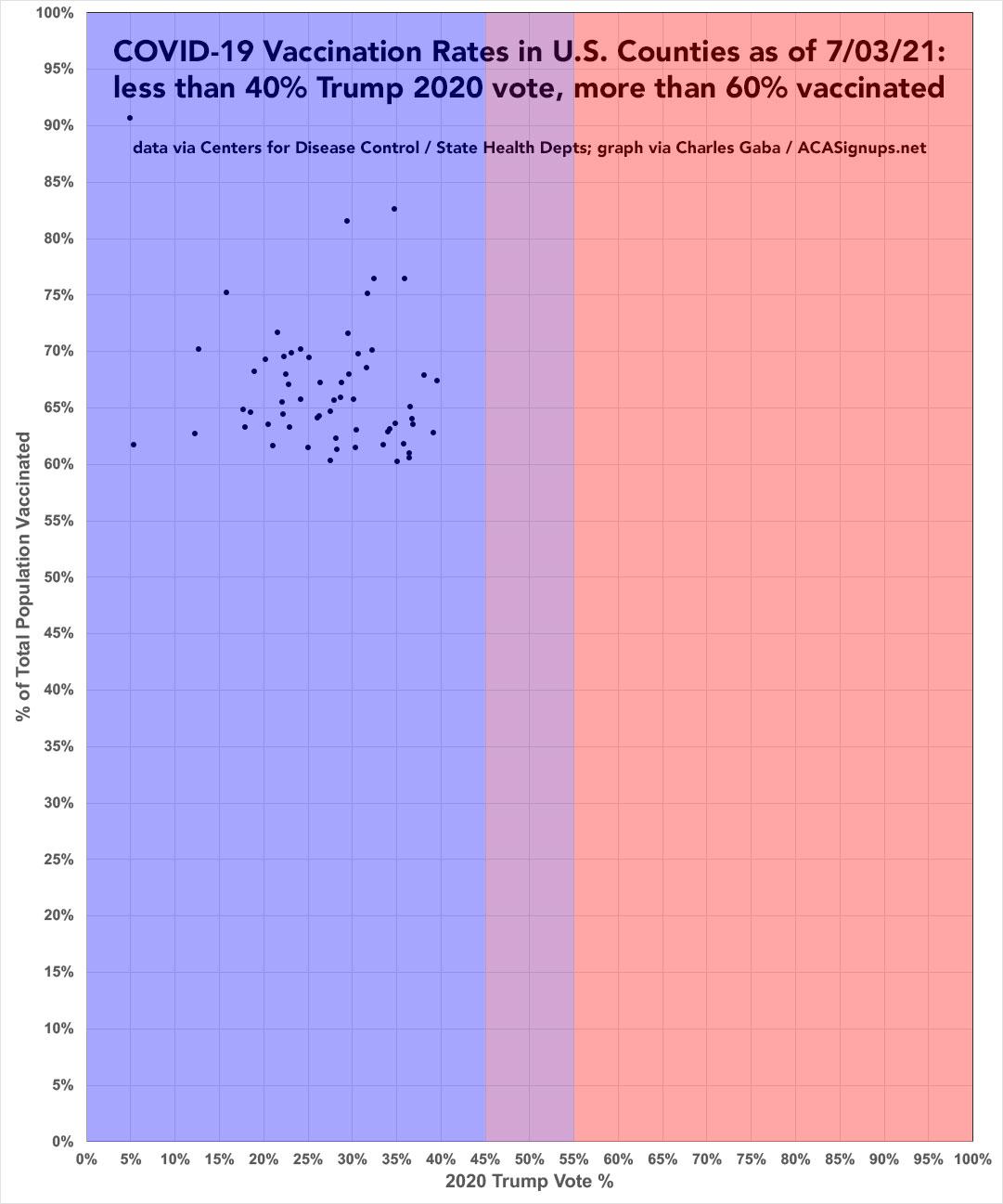 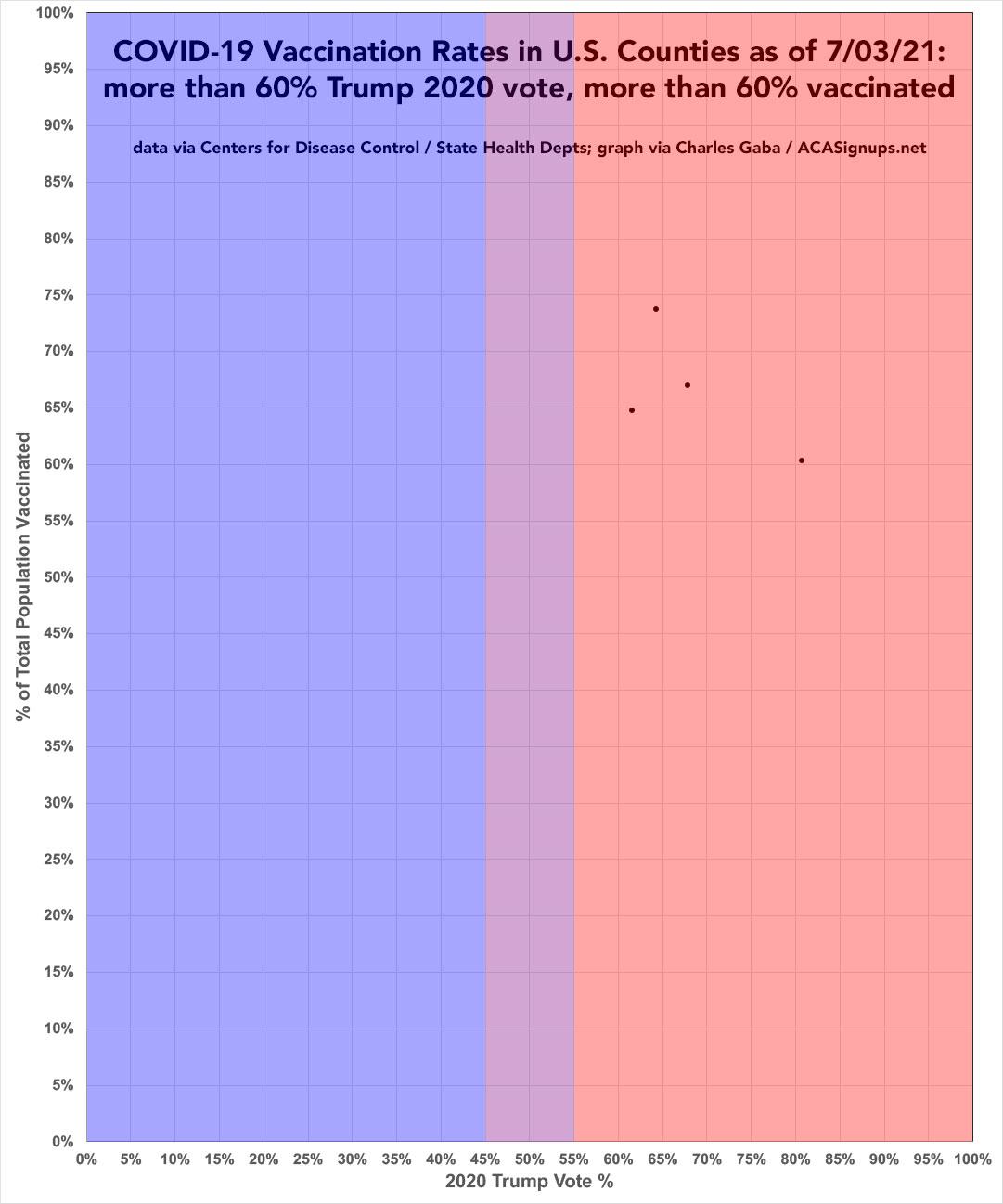 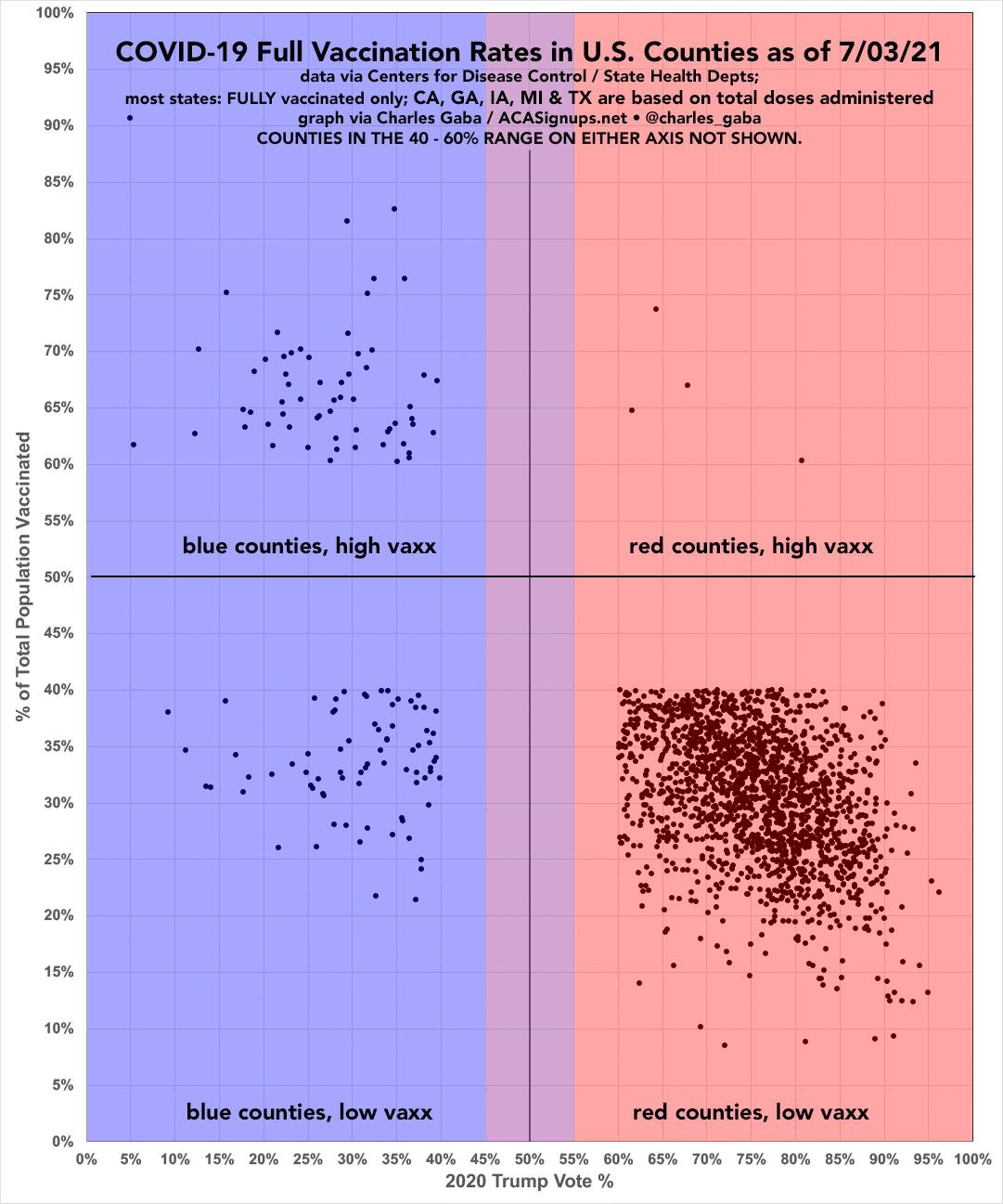 First, let's look at the lower-left quadrant (counties which are deep blue politically but also have a low vaccination rate), since that would seem, on the surface, to go completely against my "Red/Blue = Vaccination Status" theme. What's going on there? Shouldn't these deep-blue counties have higher-than-average vaccination rates?

Well, I looked up the demographic breakout of of all 77 counties (via Wikipedia) and found something which is both deeply concerning and at the same time not at all surprising: 62 of them are more than 40% Black (in fact, 55 of those are majority Black counties). Of the remaining 13 counties, 7 are majority Native American (over 80% of the population, in fact), while 1 in Texas (Zavala County) is "91.22% Hispanic or Latino of any race" according to Wikipedia:

(I should give a shout-out to @TigerHawkeye on Twitter for reminding me to check on this; I've been meaning to for several weeks but they spurred me into action.)

Needless to say, there's a serious problem here. On average, only 35% of the total populations of these counties have been vaccinated so far. Considering that only 15% of the Black population nationally say that they refuse to get vaccinated, this seems to be a situation where at least 30-40% or so of the rest of the population is willing to get vaccinated...IF issues of access, transportation, time off of work etc. are resolved.

It's also worth noting, however, that these 77 counties combined still only represent 6.36 million people total, or around 4.13 million unvaccinated Americans. Of course, that includes children under 12 as well, who likely make up around ~1 million of the 6.36 million. That leaves perhaps 3.1 million residents 12+ who could get vaccinated.

The lower right quadrant (deep red / low-vaxx, or MAGA country if you will) represents 9 times as many people...57.02 million total. In terms of the unvaccinated population, the difference is even more stark: Only 31.5% of the residents of those 1,718 counties have been vaccinated, meaning there's over 39 million yet to be vaccinated. Again, assuming ~15% of the total population is under 12 years old, that's roughly 30.5 million who could get vaccinated but haven't yet...or nearly 10x as many.

As for those 4 counties in the upper-right quadrant (deep red, high-vaxx), they consist of:

I see likely explanations for two of these four outliers (The Villages is a huge retirement community, and I assume the LA State Penitentiary has been good about vaccinating prisoners and guards?), but I have no idea what's up with the other two...perhaps their local public health officials are just doing a really, really good job of convincing residents to #GetVaxxed, which is great if true!.