~6.8 million low & middle-income Americans are getting an *extra* ~$900+ apiece in COVID relief thanks to the #AmRescuePlan

A few days ago I called out Axios healthcare reporter Sam Baker and others who spread the jaw-droppingly inaccurate claim that the American Rescue Plan (ARP) will spend anywhere from $25,000 - $40,000 per person to provide healthcare coverage to uninsured individuals.

Everyone who spread this disinformation was getting both the numerator and the denominator wrong. In short, they were claiming that the federal government was going to spend up to $53 billion to provide healthcare coverage to a mere 1.3 million people for as little as a six-month period (which would amount to an insane $80,000 per year apiece if true...which it isn't).

As I explained in painstaking detail, the actual amount being spent per person is more like $3,300 apiece for anywhere from 14.2 million to 18.6 million people depending on whether you're going by the House or Senate CBO score (and the final version of the ARP was the Senate version).

Aside from completely misrepresenting who most of the subsidy money is going to, however, Axios and other outlets also lumped in a chunk of money (around $6.3 billion) with the rest which doesn't even belong in the same category. This misunderstanding is a bit easier to understand, since the money in question is for ACA enrollee subsidies...but the nature of it has nothing to do with providing healthcare coverage in 2021, 2022 or beyond. This $6.3 billion really amounts to a simple additional relief payment to several million people, along the lines of the standalone $1,400 "direct relief" checks.

Here's how the total money in question breaks out under both the House and (final) Senate versions: 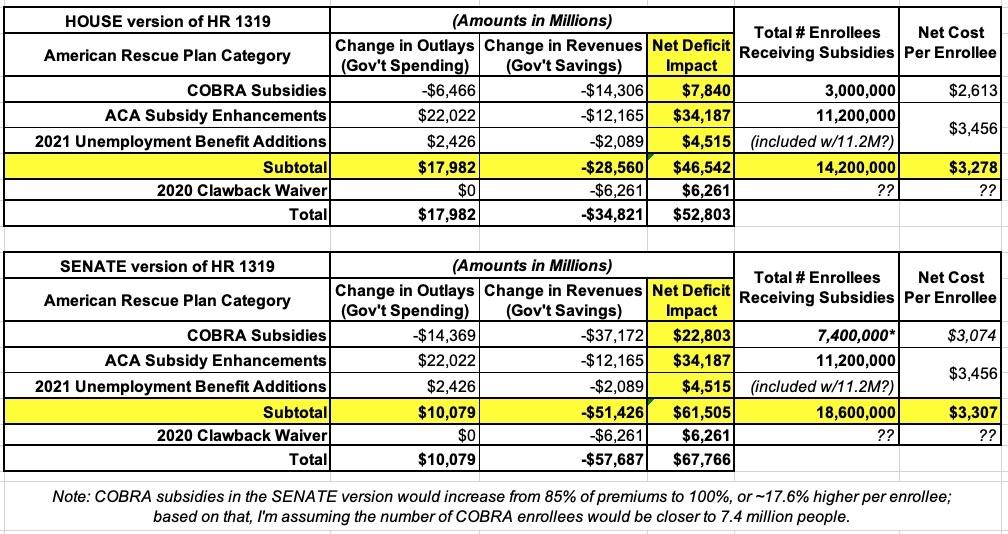 As you can see, I've separated out the "2020 Clawback Waiver" amount (which didn't change from House to Senate versions) from the rest of the money. What's this all about?

Modification of limits on reconciliation of tax credits.

Under current law, people are entitled to advance payments of their subsidies, which are based on income estimated from tax returns for prior years. If people’s circumstances change to the extent that their advanced subsidies exceed the actual subsidies to which they are entitled, they may be required to repay some or all of the credits. Section 9662 would remove this requirement for purposes of plan year 2020.

Section 9662 also would eliminate the requirement that people must repay any overpayments of health insurance subsidies received for plan year 2020. JCT estimates that section 9662 would increase the federal deficit by $6.3 billion over the 2021-2030 period after accounting for interactions with sections 9661 and 9663 as well as section 9501 in subtitle F. This increase would come from a decrease in revenues.

Put simply, subsidized enrollees last year received around $6.3 billion in "excess subsidies"...they underestimated their income for the year 2020 and would normally be required to pay them back, but the ARP is waiving that "clawback" of overpayments for one year only in response to the pandemic.

Notice how none of this has anything (directly) to do with providing health insurance coverage for these same people in 2021 or beyond. Some of these people have since turned 65 and are now on Medicare. Some have moved from an exchange plan to Medicaid. Some may have gotten a job with healthcare benefits, even in the current economic situation.

Now, most of them probably renewed their exchange coverage, but there's no direct connection between the excessive subsidies they received last year and whether or not they enrolled in coverage for this year (especially since anyone who renewed their ACA coverage had already done so by late December 2020 anyway...months before they had any way of knowing that they wouldn't have to pay back excess subsidies for the year).

Now that I've made it clear that this particular $6.3 billion doesn't belong with the rest of the money above, just how many people are benefitting from it?

Unfortunately, the CBO report doesn't say. It lists the dollar amount but not the number of recipients, so I had to do a little sleuthing in IRS records to figure that out (thanks to Twitter followers @WAHealthEnroll and @Jessica61620980 for the assists).

First, here's the report from the Treasury Dept's. Inspector General for Tax Administration on the 2019 Filing Season, which includes APTC overpayment data (and underpayment data, I should note!) for 2017, 2018 and 2019.

Unfortunately, the 2020 data (for 2019 enrollment) isn't available yet, presumably due to the massive backlog at the IRS via the pandemic. Of course the 2021 data (for 2020) isn't available since we're still in the middle of tax filing season...I assume the CBO's $6.3 billion figure is an estimate. 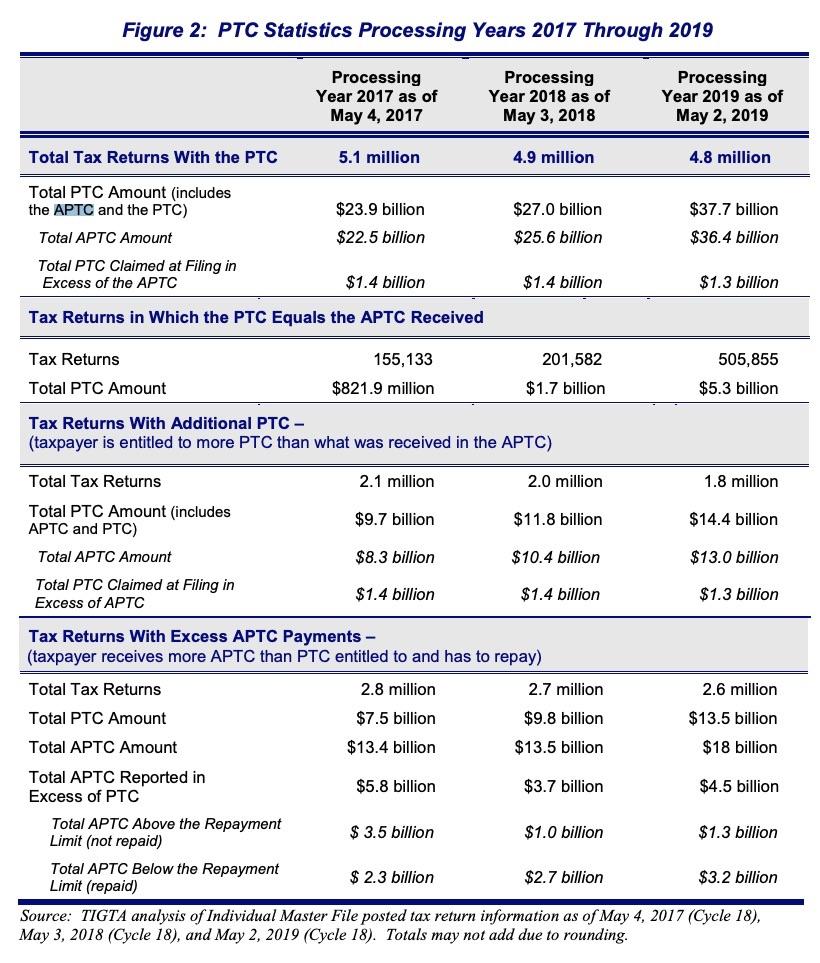 I also found the same report from a few years earlier, which notes the 2016 numbers as 2.6 million returns totalling $4.2 billion in excessive APTC.

Each of these numbers refers to the prior year's enrollment:

However, that still doesn't tell me how many individual people the $6.3 billion is being divided among.

For that, the best estimate I can get comes from this report, which includes the following table breaking out how many households there are of different sizes: 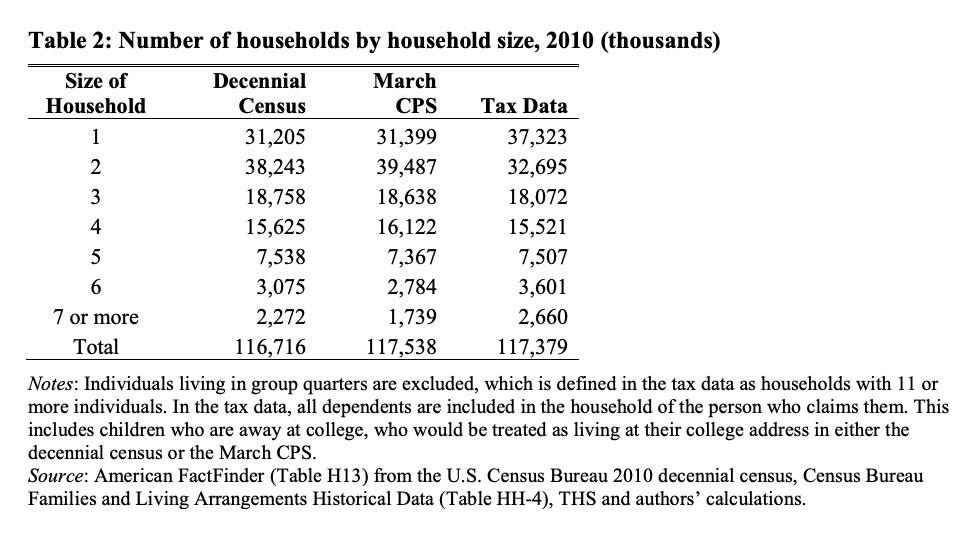 When you break all three estimates out, they come out pretty close to each other: A little over 2.5 people per household including tax filings:

This is based on 2010 data, of course, so it's likely these have shifted around somewhat over the past decade, but I can't imagine it's changed that much.

Anyway, assuming this is close, it means that $6.26 billion in excessive APTC payments will be kept by around 6.8 million Americans, averaging around $917 apiece...above and beyond the $1,400 direct relief payments which virtually all of them are receiving (remember, until now, APTC was only available to those earning less than 400% FPL anyway, which is around $105,000/year for a family of four...and the relief checks don't cut off until $75K for a single adult or $150K for a married couple).