Biden Admin reviewing Seema Verma's parting rancid turkey; #NBPP2022 under review after all...but what of the APA or the CRA? 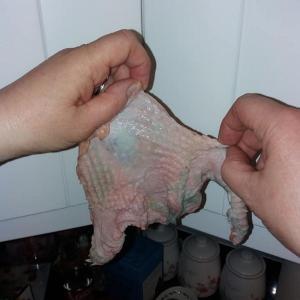 Last Thanksgiving, regular readers may recall that I went on a bit of a rant regarding the annual Notice of Benefit & Payments Parameters, which is a yearly collection of administrative tweaks made by the CMS Administator regarding the specific way in which a slew of ACA policies are actually implemented.

Out of the dozen or so rule changes included in the 2022 NBPP, several of them were perfectly reasonable; several were fairly nominal or neutral...and several of them should have set off red flags everywhere for the incoming Biden Administration, including:

There's also a couple of rules in the 2022 NBPP which I opposed, but which won't cause too much damage (at least relative to the three above):

Regarding the first two items, as I noted at the time:

...the whole idea was to provide a trustworthy, respected, official source for people to compare and choose from all ACA-compliant policies only, without any bias toward or against any particular carrier or plan and without the enrollee being tricked or confused into signing up for a non-ACA compliant junk plan. Again: THAT'S ONE OF THE MAJOR POINTS OF THE PPACA IN THE FIRST PLACE: PATIENT PROTECTION.

On the surface, this seems harmless: Making it easier for people to enroll in ACA policies via more outlets is a good thing, right? Unfortunately, as Tara Straw Center on Budget & Policy Priorities noted last year, EDEs raise a host of potential problems:

Many DE entities offer plans that don’t comply with ACA standards, and they may benefit financially if they enroll more people in them. Some insurers and brokers operating through DE offer short-term health plans and other types of plans that don’t meet ACA consumer protections and benefit standards but pay high commissions to agents and brokers. Federal rules bar DE entities from displaying these plans alongside marketplace plans, but some DE sites use screening tools to shift consumers away from marketplace options. This raises a serious threat to both consumers and the ACA marketplace if insurers and brokers use their status as approved DE entities to enroll consumers in non-compliant plans. Also, the sites’ screening tools collect personal and health information that can be used for future marketing of non-compliant plans.

People who are eligible for Medicaid or other programs may face additional barriers to enrolling when they rely on a DE website. The marketplace has a “no wrong door” policy, meaning that consumers who go to the marketplace website can fill out one application and be routed to Medicaid, CHIP, or marketplace subsidies based on the information they provide. But some DE websites divert consumers from the marketplace application process before they even reach it, by not informing them that they might be eligible for no-cost coverage or by steering them toward non-ACA products.

One health insurance issuer encourages consumers with Medicaid-eligible children to “buy a plan direct” from them, which bypasses the marketplace’s single streamlined application that would indicate their child’s Medicaid eligibility.

DE websites prevent consumers from fully comparing private health plans based on price and quality, which impedes competition among insurers. Unlike marketplace websites, which allow people to compare all qualified health plans on an apples-to-apples basis, DE entity websites may not present all available marketplace plans or comparable plan information. Moreover, DE entities may have financial incentives to steer consumers to certain insurers. Consumers thus may not end up with the plan that would best meet their needs. Moreover, insurers with significant market share can use DE and EDE to maintain their dominance, making it harder for small insurers or new entrants to compete.

One web broker lists what appears to be a complete list of plans (“17 of 17”) available in a rating area but in reality covers only about one-third of the available plans.

The proposed 2022 NBPP would deal a complete death blow to the first and third of the bullets above. It would allow DEs to list junk plans side by side with ACA plans and it would allow them to bury/hide some information on the policies which are offered.

,,,It's bad enough that the Trump Administration is trying to undermine the core principles of the Affordable Care Act by allowing private broker sites to hawk junk plans side by side with ACA-compliant ones (which would also mean that a portion of the User Fees being paid by carriers to promote their ACA-compliant policies would also effectively be going to market and promote junk plans sold by other carriers who don't pay the User Fee, I should note...which I'm guessing won't go over well with the ACA carriers). This final change, however, would allow any state to completely stop participating in an official ACA exchange altogether.

I don't mean splitting off of HealthCare.Gov onto their own state-based ACA exchange, as 15 states have done, mind you. I'm talking about not operating or even being listed on ANY official ACA exchange whatsoever.

As for the third item (1332 waivers), I wrote about this extensively in 2018. The short version is that it would allow states to effectively ignore or bypass critical ACA protections, pushing non-compliant junk plans even to the point of subsidizing them instead of actual ACA-compliant policies.

That's pretty much what the Trump Administration is allowing the state of Georgia to do starting in 2023 (in fact, they're also allowing Georgia to drop out of HealthCare.Gov and rely on private carriers & brokers only...the very thing I warned against above), though fortunately there's a lawsuit pending against the Georgia wavier:

On January 14, 2021, Planned Parenthood Southeast and the Feminist Women’s Health Center filed a lawsuit challenging the Trump administration’s approval of Georgia’s waiver under Section 1332 of the Affordable Care Act (ACA). The lawsuit was filed in federal district court in DC.

...Regular readers know that the Trump administration—through the Centers for Medicare and Medicaid Services (CMS) and the Treasury Department—approved a broad waiver request from Georgia under Section 1332 of the ACA. The approved waiver authorizes the state to establish a reinsurance program for plan year 2022 and eliminate the use of HealthCare.gov beginning with plan year 2023. CMS and Treasury approved the waiver application on November 1, 2020. The history of Georgia’s waiver application and approval is summarized in prior posts as well as in the complaint filed in the lawsuit.

The reinsurance portion of the waiver is straightforward; of the 16 states with an approved Section 1332 waiver, all but one state has established a state-based reinsurance program. But the second part of the waiver application, known as the Georgia Access Model, is far more controversial. This is the broadest waiver yet to be approved under Section 1332 and relies on interpretations of Section 1332 made in much-criticized Trump-era guidance from 2018.

Critics have long argued that Georgia’s proposal fails to satisfy Section 1332’s procedural and substantive guardrails, meaning it could not be lawfully approved by the Trump administration. Given this controversy, legal challenges to the waiver approval were expected.

...The lawsuit argues that the Georgia Access Model violates all four statutory guardrails because it will “drastically underperform the ACA.” The waiver proposal could lead to net enrollment losses in Georgia, which violates the coverage guardrail. The waiver could lead some consumers to enroll in non-ACA plans (such as short-term plans) with benefit gaps, which violates the comprehensiveness guardrail. And consumers will have to pay higher premiums and out-of-pocket costs through higher broker commissions, reduced competition, and adverse selection against the ACA markets, which violates the affordability guardrail and potentially the deficit neutrality guardrail (since higher ACA premiums mean higher federal outlays in the form of premium tax credits).

The good news is that it appears the Biden Administration is on the case. Via Amy Lotven of Inside Health Policy:

The final 2022 Notice of Benefit and Payments Parameters is under review by the White House more than three months after the Trump administration finalized some of the most controversial pieces of the proposed rule before leaving office in January but left remaining policies for the Biden CMS.

The draft rule out in December included several controversial policies, most notably, it allowed all states to drop a centralized exchange and instead rely on agents and brokers to enroll people into Affordable Care Act plans. The policy mirrored Georgia’s proposal approved in November, based on the parameters of the Trump administration’s revised 1332 waiver guidance, which let the state leave the exchange starting in 2023.

Although the Trump policy has been finalized, the Biden administration could now say that it plans to re-regulate, which would signal to everyone “don’t waste your time on it,” says a source following the issue.

I'm glad to see that Biden's OMB is on top of this, but I'm concerned that I'm not hearing anything about either the Administrative Procedure Act or the Congressional Review Act being invoked. Perhaps one or both of those are also in the works, but if they are, I'm unaware of it:

The APA applies to both the federal executive departments and the independent agencies. U.S. Senator Pat McCarran called the APA "a bill of rights for the hundreds of thousands of Americans whose affairs are controlled or regulated" by federal government agencies. The text of the APA can be found under Title 5 of the United States Code, beginning at Section 500.

The Congressional Review Act (CRA) is a law that was enacted by the United States Congress under House Speaker Newt Gingrich as Subtitle E of the Contract with America Advancement Act of 1996 (Pub.L. 104–121 and signed into law by President Bill Clinton on March 29, 1996.

The law empowers Congress to review, by means of an expedited legislative process, new federal regulations issued by government agencies and, by passage of a joint resolution, to overrule a regulation. Once a rule is thus repealed, the CRA also prohibits the reissuing of the rule in substantially the same form or the issuing of a new rule that is substantially the same "unless the reissued or new rule is specifically authorized by a law enacted after the date of the joint resolution disapproving the original rule" (5 U.S. Code § 801(b)(2)). Congress has a window of time lasting 60 legislative days (i.e., days that Congress is actually in session, rather than simple calendar days) to disapprove of any given rule by simple majority vote; otherwise, the rule will go into effect at the end of that period.[5][6]

Prior to 2017, the CRA had been successfully invoked only once to overturn a rule (in 2001; see below). In January 2017, however, with a new Republican president (Donald Trump), the Republican-controlled 115th Congress began passing a series of disapproval resolutions to overturn a variety of rules issued under the Obama administration. Ultimately, fourteen such resolutions repealing Obama administration rules were passed and signed into law; a fifteenth resolution was passed by the House but failed in the Senate. Because of the shortness of legislative sessions during the 114th Congress, the 115th Congress was able to target rules issued by the Obama administration as far back as May 2016. In late 2017 and early 2018 Congress passed two resolutions repealing Consumer Financial Protection Bureau rules made by former President Obama's CFPB Director, Richard Cordray, who did not leave his post until late 2017.