Updated: Well, that was fun while it lasted: The NEXT big #ACA lawsuit is coming down the pike. 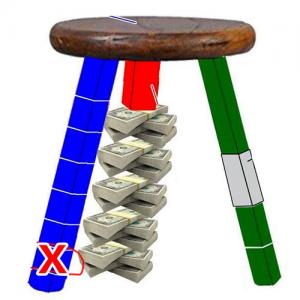 Updated to include extra details from Harris Meyer, who wrote about the case back in March.

Yesterday morning in my post celebrating the Supreme Court throwing out the insanely stupid CA v. TX lawsuit (previously TX v. Azar or, as I called it, Texas Fold'em), which threatened to strike down the entire Affordable Care Act, I noted that...

So, are there any MORE challenges to the ACA? Of course. As Katie Keith notes over at Health Affairs:

As the law hangs in the balance, other ACA litigation is proceeding. The Supreme Court has been asked to hear appeals by health insurers over whether they are entitled to fully recover unpaid cost-sharing reduction payments. It is not year clear whether the Court will agree to do so; if it does, the appeals would be heard next term. Other lawsuits remain pending before district and appellate courts over the scope of the ACA’s contraceptive mandate, the preventive services mandate, and Section 1557, among other issues.

...Still other ACA-related lawsuits are temporarily delayed or on hold. These include lawsuits over Trump administration rules loosening restrictions on association health plans, providing greater protections to providers who object to performing certain services for reasons of conscience, requiring that insurers bill separately for abortion- related coverage, and adding global expiration dates to HHS rules, among other matters.

...but here's the thing: None of these other cases threaten the ACA itself or any of its core provisions.

My final sentence depends on how you look at it, I suppose. When I say, "core provisions" I mean things like mandating guaranteed issue, community rating, coverage of essential health benefits, the financial subsidies, the ACA exchanges, Medicaid expansion and so forth. The ACA has dozens of provisions, however, and your definition of which ones are "core" may differ from someone else's.

Having said that, at least one of the other cases in the batter's box could be pretty nasty for a bunch of people, even if it doesn't threaten most of the healthcare law itself: Kelley v. Becerra.

Harris Meyer was the first (that I know of) to write up a solid explainer of the case back in March:

With a challenge to the Affordable Care Act still pending at the Supreme Court, conservatives are continuing to launch legal attacks on the law, including a case in which a Texas federal judge seems open to ending the requirement that most Americans must receive preventive services like mammograms free of charge.

Businesses and individuals challenging the ACA’s first-dollar coverage mandate for preventive services have legal standing and legitimate constitutional and statutory grounds to proceed with their lawsuit to overturn it, U.S. District Judge Reed O’Connor ruled late last month in Fort Worth. O’Connor, who previously found the entire ACA to be unconstitutional, denied most of the federal government’s motion to dismiss the case, Kelley v. Azar.

The plaintiffs cite religious and free-market objections to the ACA requirement in their class action suit against the government seeking to halt enforcement of the requirement.

A few things have changed since then, of course: The name of the case is now Kelley v. Becerra now that President Biden's HHS Secretary has been confirmed, and of course the CA v. TX case was dismissed for lack of standing by the Supreme Court yesterday morning. Otherwise, though, it's deja vu all over again: Reed O'Connor is the same judge who moved the CA v. TX case forward in the first place.

In April, Ian Millhiser wrote his own explainer over at Vox:

Kelley v. Becerra is the fourth round of litigation attacking major provisions of the Affordable Care Act. It seeks to take out several provisions of Obamacare governing which forms of preventive care — things like birth control or vaccinations or cancer screenings — must be covered by health insurers. And it primarily relies on the kind of legal arguments that fell out of vogue in the federal courts more than 80 years ago.

...Several provisions of the Affordable Care Act require group and individual health plans to cover various preventive treatments and to not “impose any cost sharing requirements,” such as copays, for them. When Congress wrote Obamacare, however, it did not itemize which treatments must be covered. Instead, it delegated that power to three different government bodies.

What's at issue here is whether or not the three governmental bodies referred to (the Preventive Services Task Force (PSTF), the Advisory Committee on Immunization Practices (ACIP) and the Health Resources and Services Administration (HRSA)) have the Constitutional authority to dictate what services/treatments have to be covered by health insurance carriers or not.

As you may have guessed, of course, there's a deeper agenda at play here:

The plaintiffs in Kelley are an array of religious conservatives, and what Judge O’Connor labels as “Free-Market Plaintiffs,” who wish to purchase health plans that do not cover some of the preventive services that insurers are currently required to cover.

Some of these plaintiffs, for example, object to a requirement that insurers pay for pre-exposure prophylaxis (“PrEP”), drugs that are very effective in preventing the transmission of HIV, because those plaintiffs believe that PrEP “encourage[s] and facilitate[s] homosexual behavior.”

(sigh) OK, so what's thea actual basis of the case?

I'm actually gonna shift to Nicholas Bagley's explainer in The Atlantic this morning instead:

The plaintiffs are making two arguments that are worth watching. The first, which has received all the attention so far, is that Section 2713 violates the “nondelegation doctrine.” The doctrine says that Congress can delegate power to government agencies only if it supplies adequate instructions for how that power is to be exercised. Otherwise, the theory goes, Congress has abdicated its responsibility to make the tough decisions.

...At the same time, some language from an earlier opinion involving the contraception mandate suggests that at least some justices think Section 2713 is troublingly vague. Which preventive services ought to be covered? The statute doesn’t offer much guidance. Maybe Congress needed to say more.

But the nondelegation argument is the weaker of the two main claims in the case.

...The second claim is more straightforward—and more worrisome. Though the appointments clause of the U.S. Constitution doesn’t get a lot of attention, it’s a key structural provision. It says that “officers of the United States” must at a minimum be appointed either by the president or by the head of a major department. (That’s an oversimplification, but it’ll do for our purposes.) If those “officers of the United States” haven’t been appointed in the right way, they’re not really officers and they can’t wield government power.

...Which brings us back to the three entities that decide which preventive services and vaccines ought to be covered without cost-sharing. None of their members appears to have been appointed in a manner that accords with the finicky particulars of the appointments clause. So a lot turns on whether the members of PSTF, ACIP, and HRSA count as “officers of the United States.” If they do, they were never properly appointed and they can’t tell anyone to do anything.

So, what's at stake here?

The upshot is that any recommendations that PSTF and ACIP have issued since 2010 might also be in jeopardy. Previous recommendations would still bind insurers: Congress adopted them when it adopted Obamacare. But some post-2010 recommendations are significant. They include one requiring insurers to cover medications without cost-sharing for people who are at high risk of HIV. Known as pre-exposure prophylaxis, or PrEP, the medications have been shown to offer “substantial benefit in decreasing the risk of HIV infection in persons at high risk of HIV acquisition.” If insurers drop coverage or start to impose cost-sharing, fewer people will take PrEP, and the number of people who get infected with HIV will likely increase.

You get the idea. Besides PrEP and contraceptive products/services such as IUDs and Nexplanon (which, let's face it, are pretty clearly the main reason for the lawsuit), there's a whole bunch of other stuff as well.

Here's the main list of preventative services which have to be covered by all ACA-compliant healthcare policies at no out of pocket charge to the enrollee (as long as they're done by an in-network provider):

The list above applies to everyone enrolled in an ACA plan; there are other lists which apply to women and children under 18 respectively:

Services for pregnant women or women who may become pregnant:

Other covered preventive services for women:

Going back to Meyer's original piece, it's important to note that it's not just ACA plans which could be impacted:

“This is a huge deal,” said Tim Jost, a retired Washington & Lee University law professor who tracks ACA litigation and has written about the suit and other efforts by conservative groups in Texas to undermine the ACA and other health policies. “It’s billions and billions of dollars of services that Americans get every year, not just from ACA health plans but also from employer plans. If this benefit ends, it would mean a lot of people would forgo preventive services and end up with much worse medical problems.”

Most startling, coverage for COVID-19 vaccines would be threatened. In the 2020 CARES Act, Congress required insurers to cover any pandemic-related preventive services or immunizations recommended by PSTF or ACIP. Because ACIP has recommended the Pfizer, Moderna, and J&J vaccines, private insurers must cover them without cost-sharing. The same goes for any boosters that ACIP recommends. If the current lawsuit succeeds, however, private insurers could start billing for future vaccinations.

In short, #KelleyvsBecerra is trying to cut out about 1/8th of the Blue Leg: 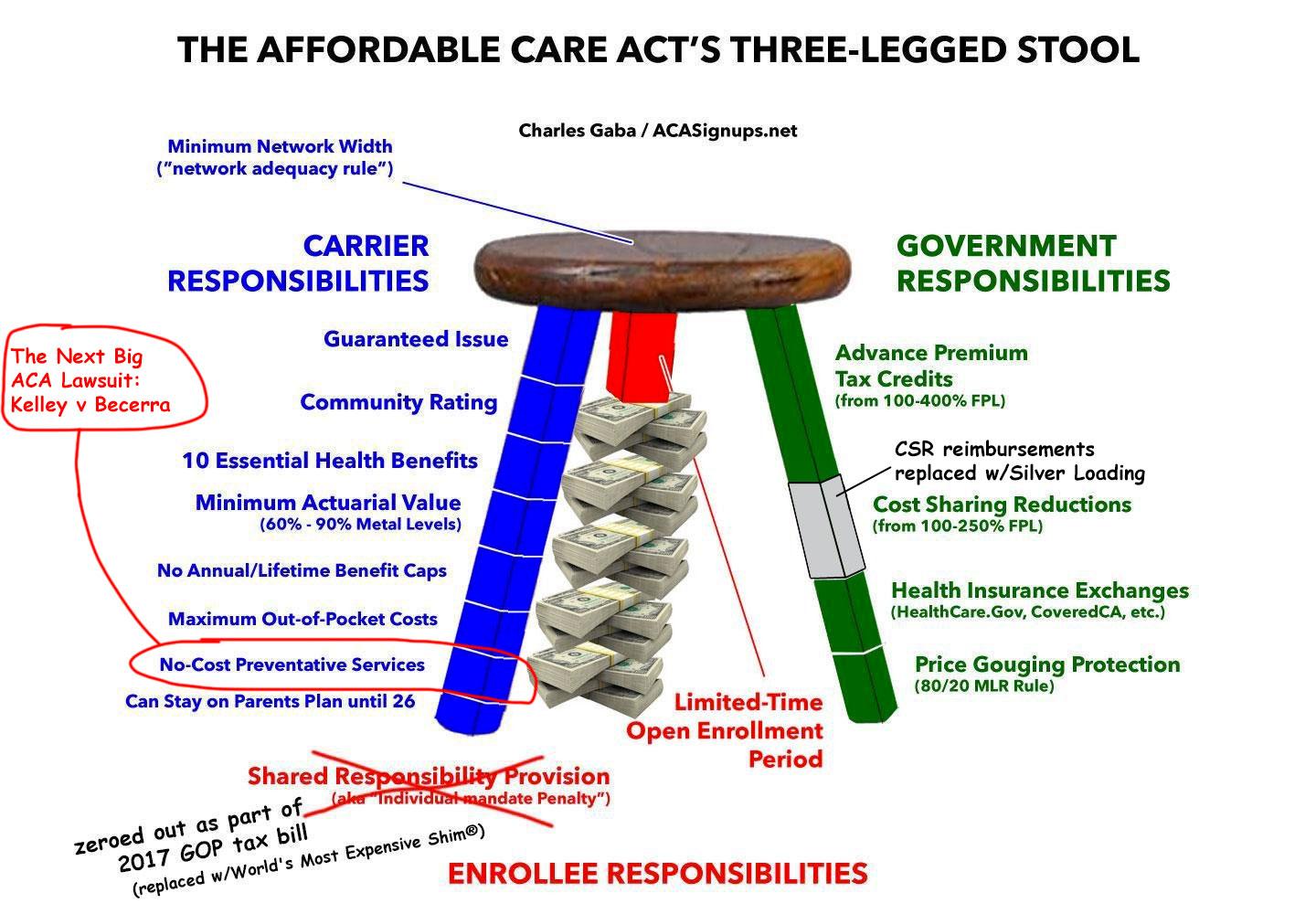