Florida: Medicaid enrollment up 22% since #COVID19 hit; could be up over 830K more if they passed #ACA expansion

For Medicaid expansion enrollment, I'm using data from Medicaid.gov's Medicaid Enrollment Data Collected Through MBES reports. These are even more outdated...I can only get official numbers through June 2019 at the moment.

Today I'm presenting Florida, where Medicaid enrollment averaged around 3.7 million residents prior to ACA expansion. I've been able to get the missing enrollment data from 2020 and 2021 from the Florida Agency for Health Care Administration, although the official CMS data runs around 6.4% lower each month than the raw totals from the FL AHCA; I've attempted to adjust for this for December 2020 - March 2021.

Florida is one of 12 states (14, technically) which hasn't expanded Medicaid under the Affordable Care Act as of yet. Kaiser estimates that around 833,000 additional Floridians would be eligible for Medicaid if the state finally did so (43,000 of them are apparently already eligible, so the actual number newly eligible is more like 790,000 statewide). This includes around 415,000 who are currently stuck in the state's Medicaid Gap and 375,000 who are eligible for heavily-subsidized ACA exchange plans right now.

Enrollment spiked sharply to over 4.3 million in August 2016 due to the state finally starting to include SSI Medicaid enrollees that month...but from what I can tell, they stopped doing so abouot a year later for reasons unknown (I have no idea why they weren't counting them in the first place either). Since then it gradually dropped off for most of 2017 - 2019...until reaching a low in February 2020 of 3.6 million, just before the COVID pandemic hit.

Since then, enrollment even in non-ACA Medicaid has jumped dramatically, reaching a high of over 4.4 million in March 2021 (and it would likely be closer to 5.2 million or higher if ACA expansion was in place). Non-ACA Medicaid was up a dramatic 22.4% vs. pre-COVID levels. Florida has 21.5 million residents, so 4.41 million is 20.5% of the entire population.

Even without ACA expansion, 2.1 million Floridians on ACA exchange plans (nearly a million of whom are SUPPOSED to be enrolled in Medicaid via ACA expansion) would lose their healthcare coverage almost immediately if the ACA is struck down by the Supreme Court, or 9.8% of the total state population. 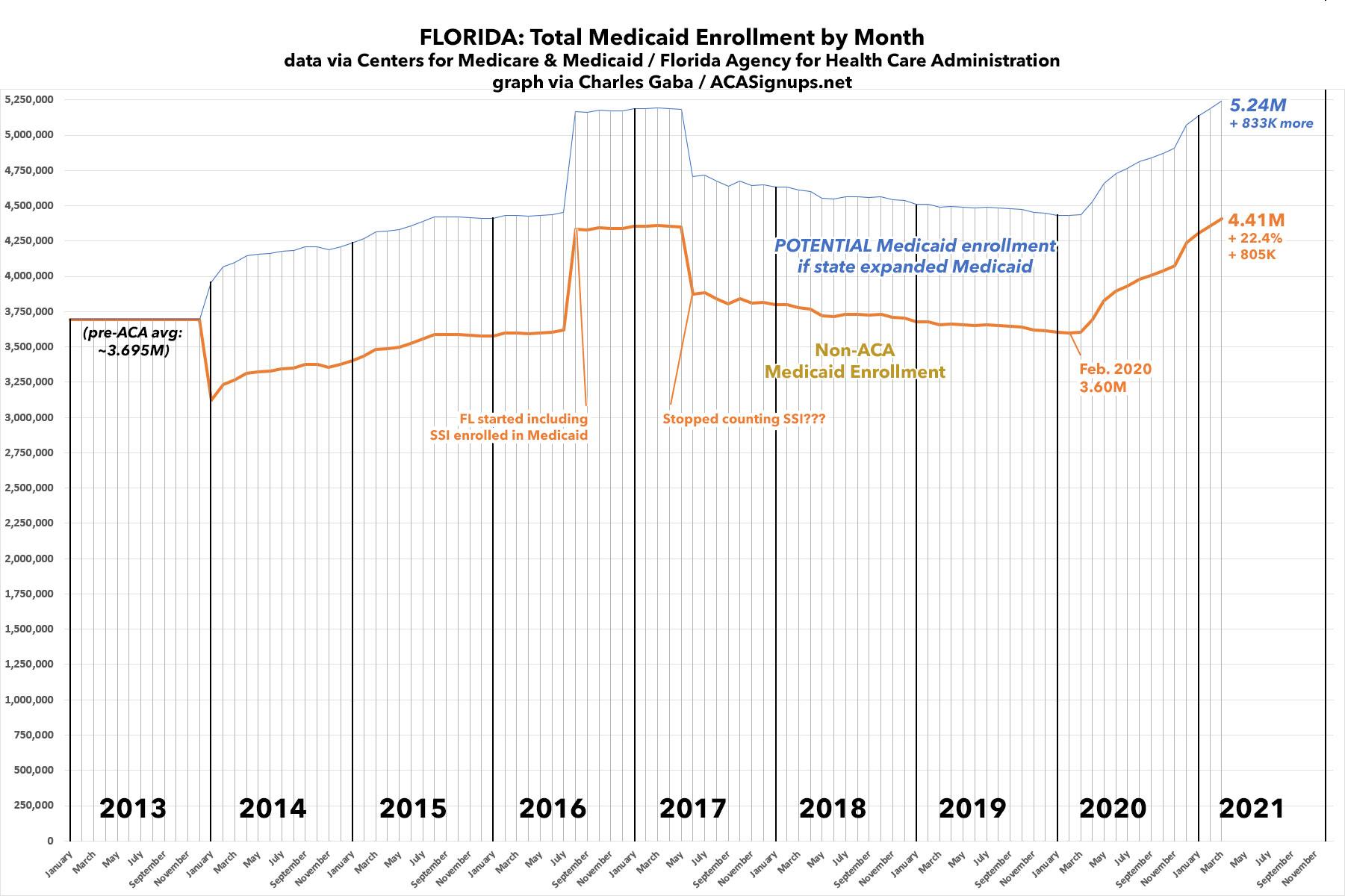